In a new video published by Gamers Nexus, slides regarding AMD's Zen 4 powered Ryzen 'Raphael' and the AM5 platform have leaked out. The slides are from March 2020 which is more than a year back and a lot has changed since then but they still provide some decent look at what AMD was planning to do with its Ryzen Desktop lineup.

Now we just want to get this information out of the way first before letting you know what has changed. The AMD Ryzen 'Raphael' Zen 4 Desktop CPUs were expected to feature mainstream SKUs ranging in the 45W to 105W TDP category and notebook H-series chips in the 35W to 65W TDP category. This is interesting since it would've been the first generation to feature the same processor design for both desktops and laptops from AMD. AMD has previously only featured APUs in its high-performance notebook segment.

Moving on, the slide talks about an upgraded AM5 platform with more IO & more current delivery which honestly is nothing new. We have seen the new package design for both AMD Ryzen Zen 4 Desktop CPUs and the LGA 1718 socket already. In terms of technology, Zen 4 chips are stated to feature two Zen 4 CCD's based on the TSMC N5 process node and a CIOD (I/O die) based on the TSMC N7 process node however the latest reports suggest that the I/O die has been moved to a 6 nm process node. The Zen 4 CCD is codenamed Durango and features 8 cores, 16 threads, and 32 MB of L3 cache with 2-Way SMT support. 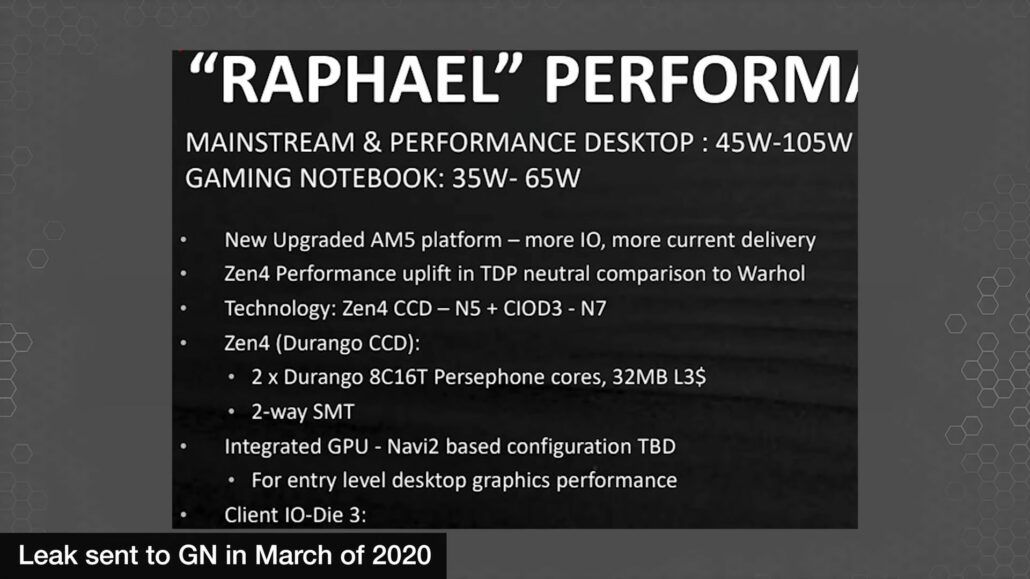 There's also an AMD RDNA 2 based integrated GPU onboard the Ryzen Raphael Desktop CPUs. It is stated to offer entry-level desktop graphics performance. In terms of CPU performance, the Zen 4 chips are stated to offer performance uplift when compared to Warhol on the same TDP. It is very interesting that we see the mention of Warhol and if (and I mean a big if) these slides are indeed real from some point in AMD's timeline, then it shows that it was something that AMD was (or is still) working on. Interestingly, there's no mention of the Zen 3 products launching early next year or the 3D V-Cache stack chiplet design which has been confirmed earlier this week at Computex.

Moving on, we have the AM5 platform block diagram which shows the CIOD3 (I/O die) in detail. The AMD Ryzen 'Raphael' Zen 4 Desktop CPU CCDs will be connected to the IOD through the Infinity Fabric bus. The slide lists down 4 channel (128-bit) DDR5 and DDR4 memory support but we know that only dual-channel DDR5 is happening with Raphael. There's also a slide that shows the Zen 4 'Raphael' SOC for AM4 with dual-channel DDR4 memory support and features that look a lot similar to an APU rather than a mainstream CPU.

So once again, these slides are really old and a lot has changed. We know that Zen 4 isn't coming to the AM4 platform and AM5 is the next big upgrade for AMD. The specifications for the CCD will be similar but we will see some major cache design upgrades through the use of 3D V-Cache & much higher TDPs. More on that here.