Intel has listed down several next-generation CPU & GPU products on its official webpage which include the likes of Raptor Lake, Meteor Lake, Xe-HPG DG2 graphics cards, and several HPC class designs such as Emerald Lake & Ponte Vecchio. While we have all heard about these products at some point, the official listings also provide some additional details and all credit goes to Komachi and Momomo_US in finding these out.

There are several lineups to go through so we will divide the article into two segments, one for the CPUs and the other for the GPUs. The Intel CPU families that have been confirmed include the 13th Generation Raptor Lake & 14th Generation Meteor Lake. Well, Intel already confirmed Meteor Lake a few days back but we get a few more tidbits.

These two families are aimed at the consumer end & for servers, Intel has listed down its Emerald Lake and Diamond Lake families that will succeed the Sapphire Rapids and Granite Rapids Xeon CPUs. On the GPU front, Intel has listed down several of its Xe-HPG DG2 GPU-based graphics card configurations and also pointed out a specific variant of its flagship Ponte Vecchio GPU. So let's start off with the CPUs.

The listing itself doesn't reveal any new specifications but does confirm that the Raptor Lake CPUs do exist and will now be part of the 13th Gen Intel Core CPU family. The Raptor Lake CPUs are also listed alongside Alder Lake CPUs (S-Series) which more or less confirms that they will be compatible with the LGA 1700 socket. 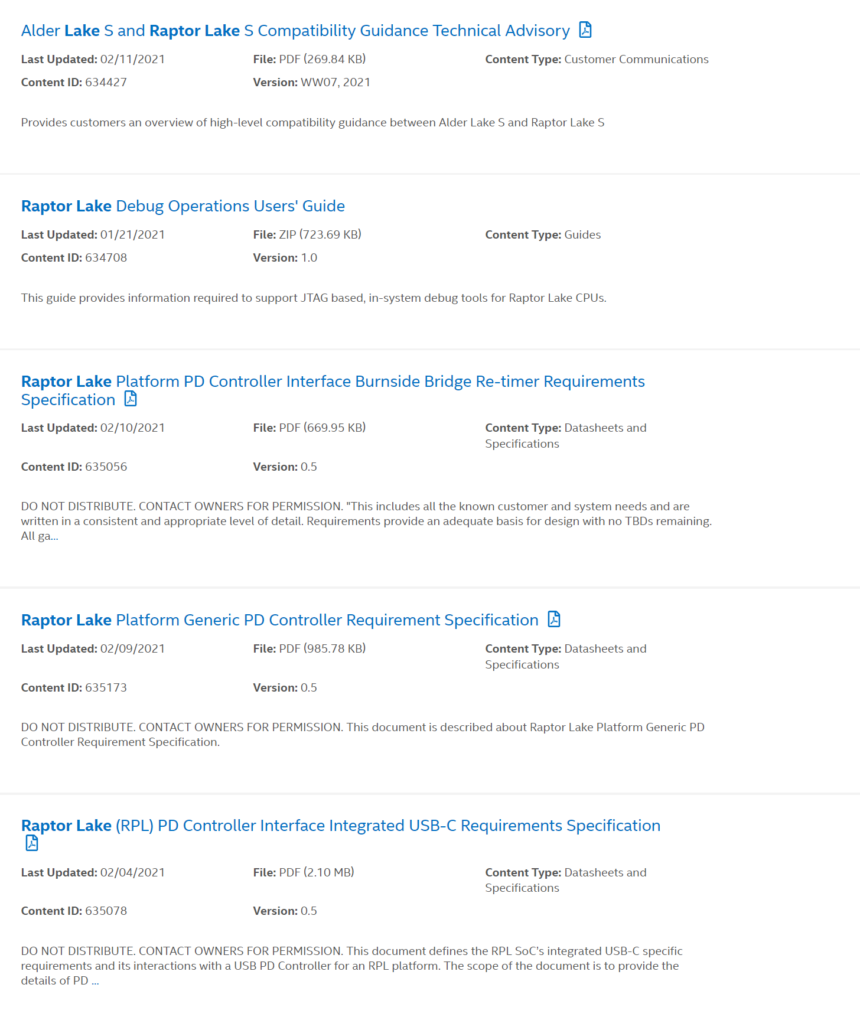 To start off with what we know so far, Intel Raptor Lake CPUs will be replacing Alder Lake but it won't be a huge change as we will get to see moving from Rocket Lake to Alder Lake. Alder Lake 12th Gen' CPUs will be the first Intel CPUs to utilize a hybrid core design approach while being based on the 10nm Enhanced SuperFin process. It will also get a brand new platform that will support DDR5 and PCIe 5.0. Raptor Lake will essentially carry most of these features over while offering slight upgrades to the platform and core changes.

For the desktop Intel Raptor Lake parts, it is stated that the lineup will get new hybrid CPU core changes for improved core performance. We know that Alder Lake maxes out at 16 cores and 24 threads. These include 8 cores based on the Golden Cove architecture and 8 cores based on the Gracemont core architecture. It is expected that Raptor Lake would reuse these cores but we can expect some changes to the way cache and clocks are handled for both desktop and mobility CPU parts.

There's also a mention of CPU cache for gaming which could be Intel's answer to AMD's own game cache. We don't know yet if this will be some embedded DRAM cache featured on Raptor Lake or a beefed-up L2/L3 design but we can definitely see some big performance upgrades in games that will help Intel compete with the absolute massive caches that AMD's Ryzen CPUs have to offer. The Intel vPro technology will also be expanded upon in terms of feature set. While Raptor Lake CPUs for the desktop will utilize DDR5-4800 and feature up to 48 PCIe Gen 5 lanes, mobility variants will get support for new LPDDR5X memory and also get a new DLVR power delivery system.

Intel also confirms Meteor Lake, its 14th Generation Desktop CPU family, on its official webpage. We already got some details from Intel such as the fact that Intel's Meteor Lake line of desktop and mobility CPUs are expected to be based on a new line of Cove core architecture. This is rumored to be known as the 'Redwood Cove' as was reported by MLID (Moore's Law is Dead) and will be based on a 7nm EUV process node. It is stated that the Redwood Cove is designed from the ground up to be an agnostic node which means that it can be fabricated at different fabs. There are references mentioned that point out to TSMC to be a backup or even a partial supplier for the Redwood Cove-based chips. This might tell us why Intel is stating multiple manufacturing processes for the CPU family.

The Meteor Lake CPUs may possibly be the first CPU generation from Intel to say farewell to the ring bus interconnect architecture. There are also rumors that Meteor Lake could be a fully 3D-Stacked design and could utilize an I/O die sourced from an external fab (TSMC sighted again). It is highlighted that Intel will be officially utilizing its Foveros Packaging Technology on the CPU to inter-connect the various dies on the chip (XPU).

Aside from the consumer-oriented lineups, we also have confirmation on the existence of the Intel Emerald Rapids and Diamond Rapid processors. According to the listings, it looks like the Sapphire Rapids family of 4th Gen Xeon Scalable Processors will be replaced by Emerald Rapids on the same Eagle Stream platform.

There's also a mention of the Fishhawk Falls platform for Emerald Rapids CPUs which may confirm that Intel plans to get back in the HEDT segment which is currently dominated by the Threadripper CPU family from AMD. Fishhawk Falls platform will be succeeding the Galcier Falls platform which supported Intel's 10th Gen Cascade Lake-X HEDT CPUs. Intel has since seemed to have abandoned its HEDT lineup entirely. We can hope for Intel to return to the enthusiast CPU segment once again with Emerald Rapids chips.

Moving over to the graphics side of things, we have details regarding several SKUs & configurations of the Xe-HPG DG2 GPU. Videocardz has done an absolutely terrific job in gathering all of the data available which confirms that at least three primarily DG2 SKUs exist which include the 512 EU, 384 EU, and 128 EU chips. Each SKU will feature multiple variants with different configurations. 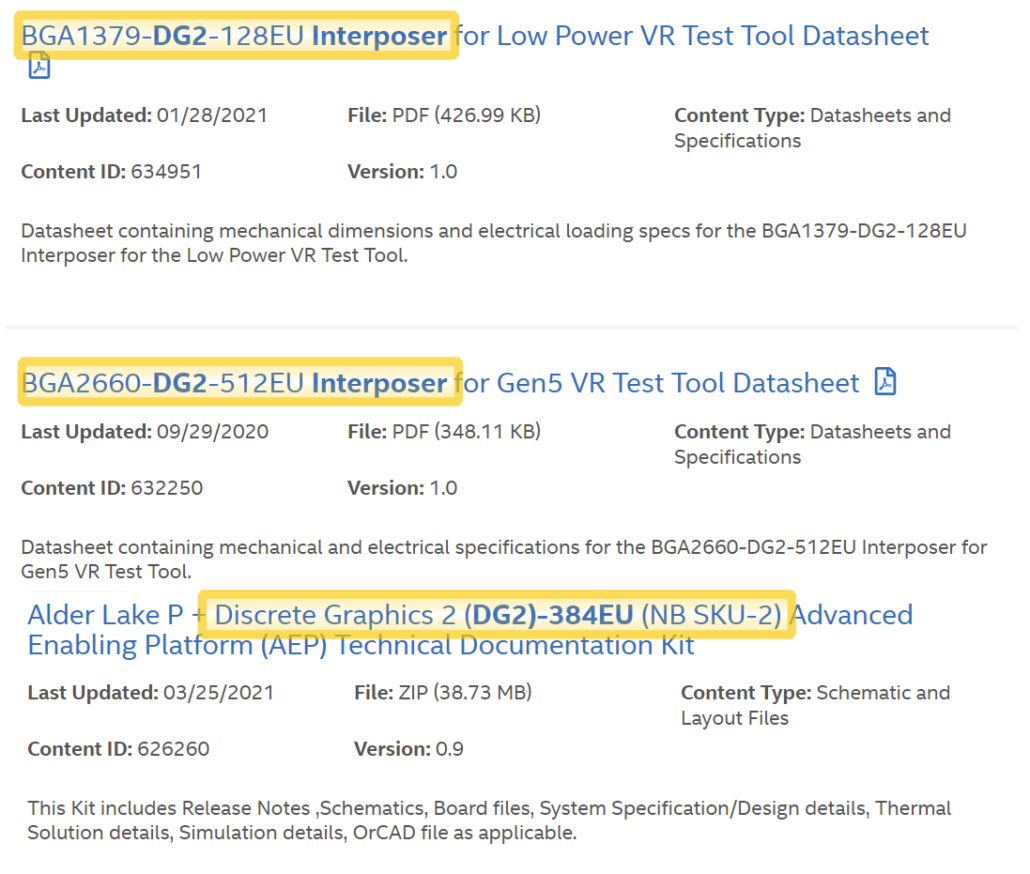 Videocardz had earlier leaked out the die configuration of the Intel Xe-HPG DG2 384 GPU variant which should measure 190mm2. The PCB blueprint shows 6 memory module locations which do confirm a 192-bit bus interface and either 6 or 12 GB GDDR6 memory capacity.

Being the biggest GPU in the Xe-HPG stack, the DG2-512EU will be based on the BGA 2660 socket whereas the smallest SKU, the DG2-128EU, will be based on the BGA 1379 socket. The list also says that the GPU SKUs will feature varying GDDR6 memory speeds starting with 14 Gbps on the entry-level designs and going all the way up to 18 Gbps on the flagship designs. While discrete desktop graphics cards will be available, Intel will also unleash its DG2 discrete GPU lineup on the mobility Tiger Lake-H and Alder Lake-P notebooks.

Lastly, we have a new thermal configuration listed for Intel's flagship Xe-HPC GPU, Ponte Vecchio. We already detailed the Ponte Vecchio GPU which is expected to feature over 100 billion transistors a few days back but it looks like the chip will require some serious amounts of cooling performance as listed by Intel. 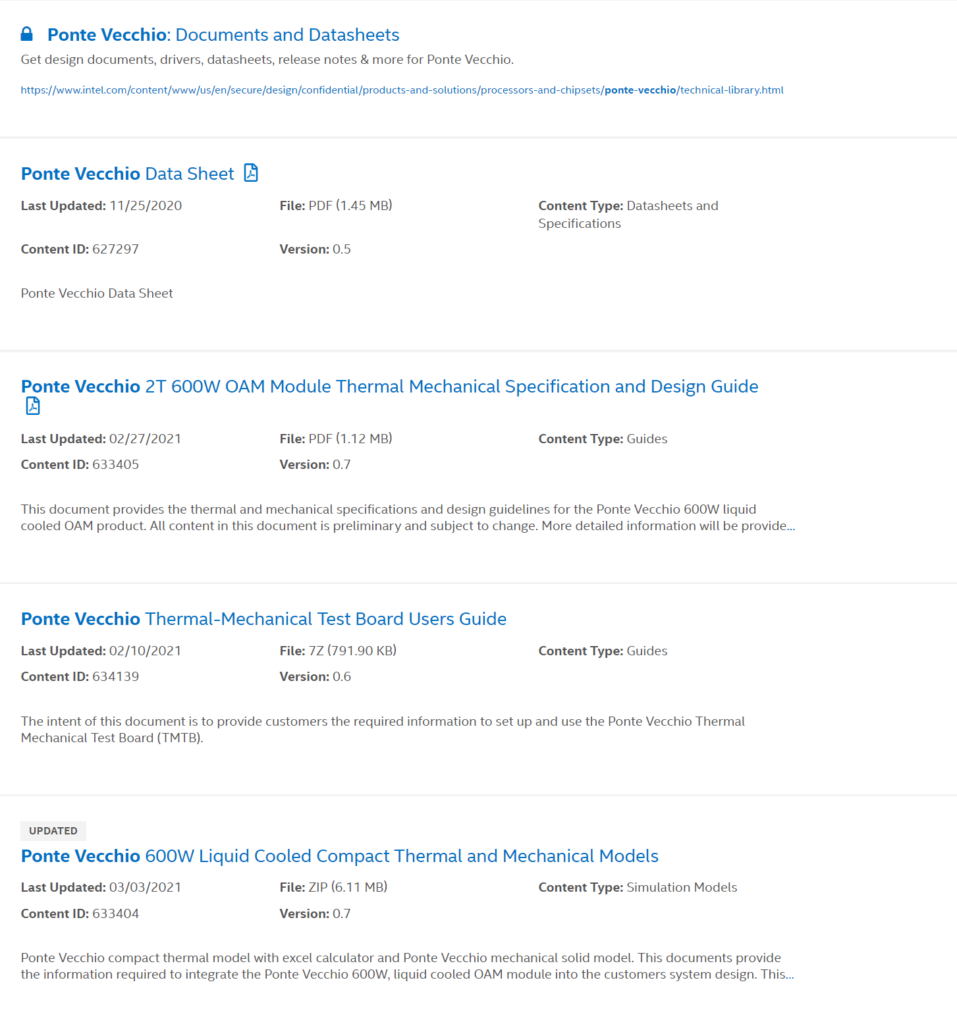 The company has listed down a 600W OCM-OAM liquid cooling module for Ponte Vecchio which may give us a hint at its extremely high TDP. The GPU is going to feature several PetaFlops of HPC horsepower so a cooling design of this tier is expected. We can expect to see this module in action on the Aurora supercomputer which Intel has stated will become operational by end of this year.