Leaked Benchmarks of AMD's Upcoming Bulldozer FX platform have been leaked over at Donanimhaber.com. The Leak includes multiple presentation slides which detail Performance, Pricing and the platforms launch lineup which are scheduled for release on October 2011.

According to AMD, The launch lineup would consist of only 3 CPU's (FX-8150, FX-8120, FX-6100) while the complete lineup would include seven FX-Series Processors detailed below: 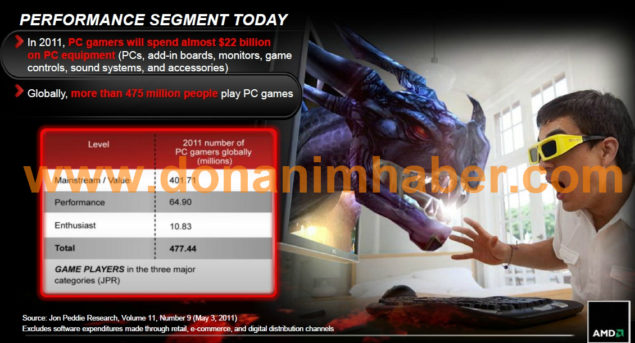 AMD's slide also details that majority of current PC gamers are Mainstream/Value users which make up a total of 400 Million users while 64 Million are Performance sided users and only 10 Million users fall under the Enthusiast category. This makes up a total of 475 Million PC gamers would wide and in 2011 alone they spent 22$ Billion on PC equipment.

The FX-Series Platform is built for gamers specifically delivering optimal performance not only in games but allowing the extra cores to work in CPU intensive applications such as Video encoding, Media playback, File Compression etc.

When compared to Intel's Core i5 Processor, The Bulldozer CPU which falls around the same retail price tag (<245$) would provide 4 More Cores, 8 Times more L2 Cache, Faster Frequency, Advanced ISA's, Full x16 Bandwidth in CrossfireX mode GPU's and fully unlocked Processors. The graph also compares total PC cost of an FX-8150 Processor with the Intel's Core i7 980X CPU. The Intel solution would cost a total of 2120$ while AMD's Bulldozer in comparison would cost 1286$ and the performance difference in between both solutions in barely noticeable as shown in the benchmarks below:

Most of AMD's Benchmarks consist of games where Bulldozer definitely outperforms the Intel counterparts. At a resolution of 1080P, Bulldozer easily dominates the Intel Core i7 980X which costs twice as much as FX-8150 and the CPU is also 10-20FPS faster than the previous gen Phenom II X6 Chip in most benchmarks.

Bulldozer also shows 10-30% improvement in CrossfireX enabled rigs against the Intel CPU's. That's mainly because of 4 Cores bottlenecking the GPU's full potential which the extra 4 Cores of AMD will unleash. In CPU intensive apps, Bulldozer falls between the i5 2500K and i7 2600K Processors, Only in a few benchmarks it outreaches the 2600K but in most situations it'll lack behind. The new AVX/AFX Instruction set also allows an 3x improvement in hardware encryption over Phenom Processors. You can see more on Bulldozer below: