NVIDIA has posted a new teaser on their official site which hints at the announcement of an upcoming product which sources have confirmed to be the Tegra K1 powered Shield Tablet. But while we wait to see a glimpse of the new tablet, Videocardz has managed to reveal the official presentation of the upcoming tablet which will be launching on 29th July in the US market. 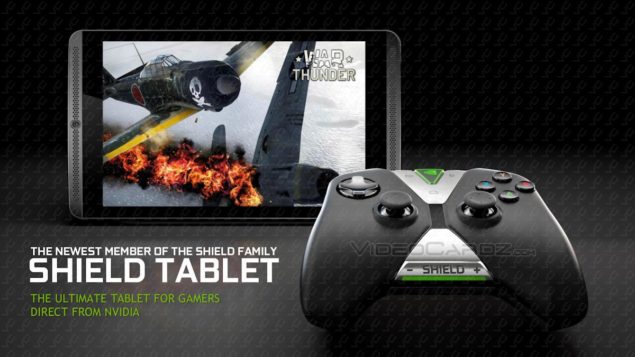 Coming to the specifications, the Shield tablet is impressive considering it features the Tegra K1 SOC which was unveiled by NVIDIA at CES 2014. From a technical perspective, the NVIDIA Shield Tablet boasts the Tegra K1 SOC with 192 Kepler GPU cores and a 2.2 GHz Quad Core Cortex A15 CPU. This along with 2 GB memory offers better performance than the competitors in the same price range. For connectivity, NVIDIA Shield Tablet offers Wi-FI + LTE on the 32 GB variant which is priced at $399 US while the $299 variant will only feature Wi-Fi connectivity.

The display used on the Shield Tablet is an 8 Inch Full HD IPS LCD which features a maximum resolution of 1920 x 1200. This is a well added display considering a smaller display would have wasted the potential of the Tegra K1's SOC in gaming and other applications. Now users can fully unleash the gaming performance of this tablet since it is from its core, a gaming product. The Tablet comes with a DirectStylus 2 included (in-holster) which can be used on the display for writing and painting if you don't want to use touch. Audio is offered by Front facing stereo audio speakers with dual bass reflex port and connected via a 3.5 mm jack. Back in the original Shield, NVIDIA had one of the best audio design for a hand held device and this could be another win when it comes to audio.

Gaming features have been a core part of the Shield devices and NVIDIA's Shield Tablet aims on reintroducing and refining each single one of them by adding Shield Wireless Controller compatibility, NVIDIA GameStream, NVIDIA Shadowplay, Grid Cloud Gaming, Console Mode, Gamepad Mapper and Tegra Zone. The Shield Tablet will provide a video output of 4K Ultra-HD in console mode which is amazing while the cameras include a front 5 Megapixel HDR and a rear 5 Megapixel auto-focus HDR. The Wi-Fi range is 802.11 a/b/g/n 2x2 MIMO (2.4 GHz and 5 GHz) and additional connectivity options include Bluetooth v4.0 LE, GPS and a 9 axis G-Sensor. The Tablet also supports Micro-Sim and a Micro SD card which can expand storage up to additional 128 GB. Battery life is said to last 10 hours is HD video playback and offered by a 19.75 Watt / hour lithium ion cell. There's also Mini HDMI 1.4a and Micro-USB 2.0 with host and device support. NVIDIA aims to deliver OTA updates directly from their servers so that your device carries the latest firmware and OS updates directly from the manufacturer.

The wireless controller or the Shield controller is an interesting addition to the Shield Tablet. The original shield did come with its own controller but this time, since we are looking at a tablet form factor, NVIDIA decided to offer the controller as an add-on at a price of $59. It comes with Wi-Fi connectivity and includes built-in stereo headphones with headphone and microphone jack. Micro-USB 2.0 connector for charging and wired gaming. It has several buttons which are used for input and comes with a rechargeable Li-Ion cell. The Wireless controller is not only compatible with the tablet but the portable shield too. In terms of performance, the Tegra K1 is faster than its competitors featuring all the great technology support of Kepler GPUs such as OpenGL ES 3.1, AEP, OpenGL 4.4, DirectX 12 API, Tessellation, CUDA 6.0 and a power consumption of less than 2W which is mind blowing. May you use it as a console, as a handheld device, as a streaming box or a personal smartphone, the Shield tablet is definitely a formidable opponent in the tablet industry. You can check out the specs sheet below: 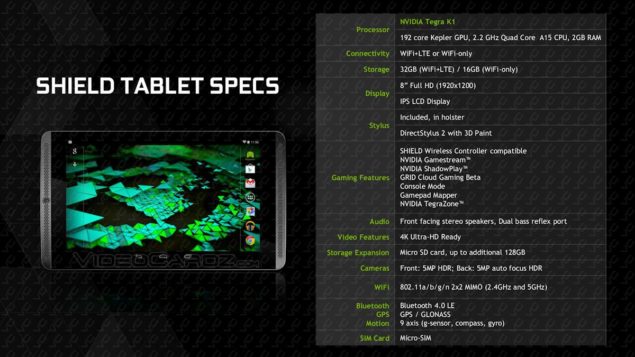 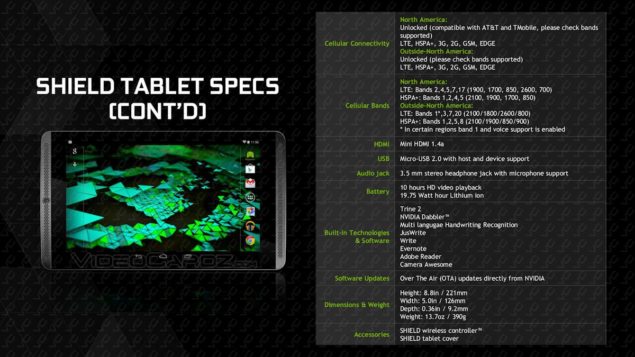 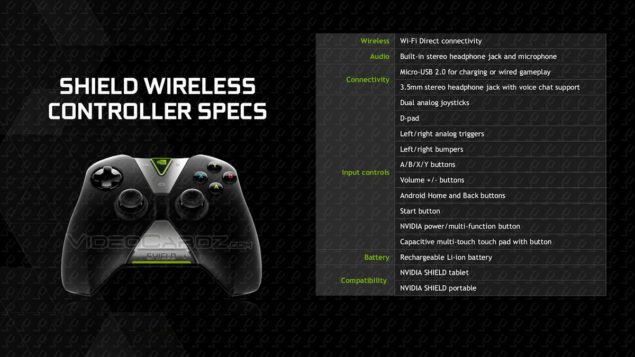 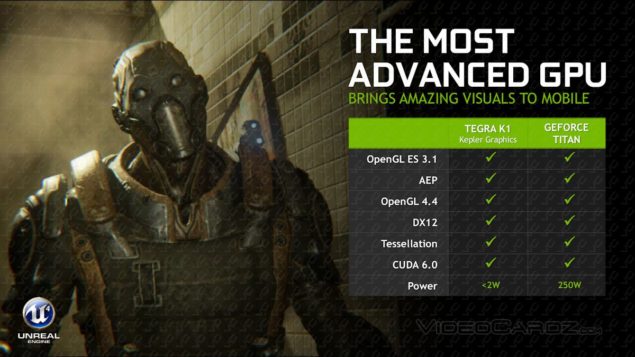 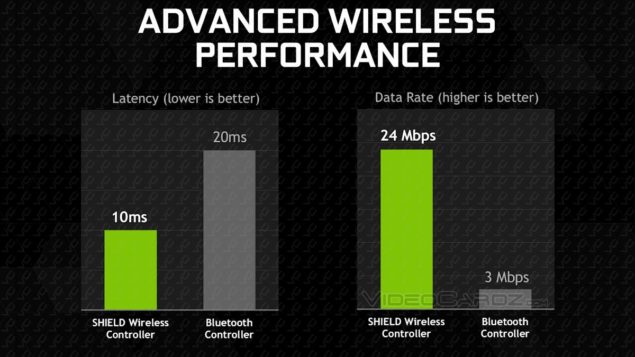 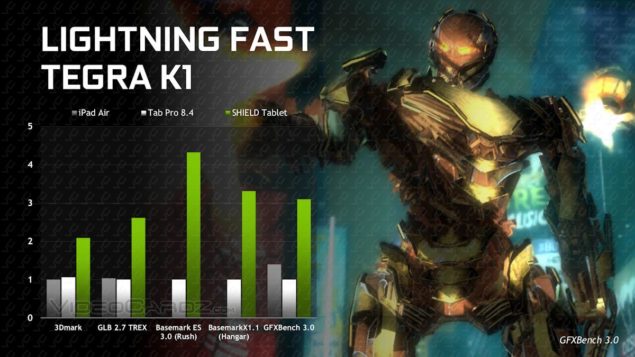 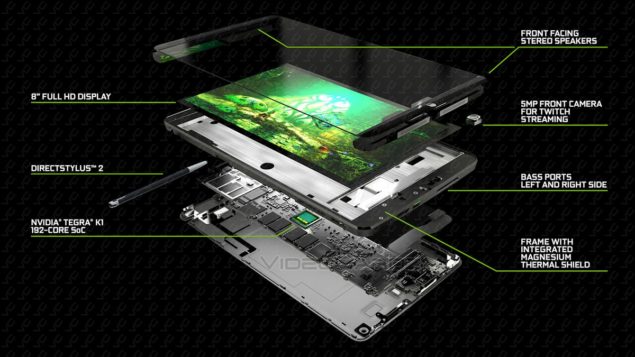 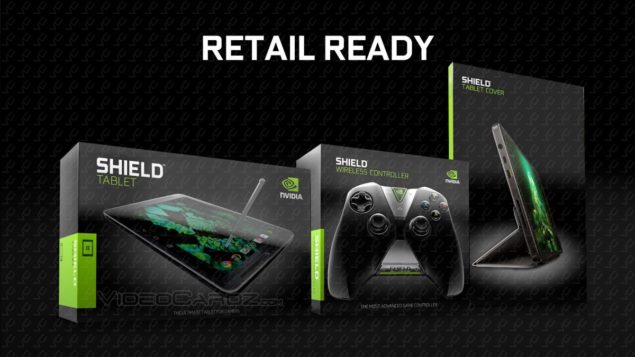 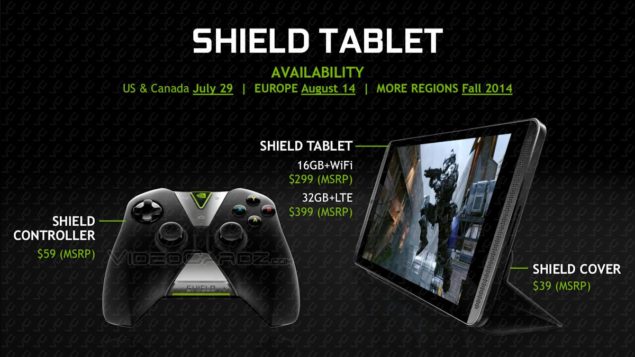