It has been a while since Nvidia released a Dual Chip based card with the last one being its Geforce 200 Series based "GTX295". News is around that Nvidia might be launching its next dual chip card in February which would be based on two Geforce 500 Series chips and would be named "GTX590". The new card is to be based on the much refined 500 series chips which have a much lower power draw at the same level of performance than the previous generation 400 series chips.

So the specs we know till now is that the card will be based on dual 40Nm GF-110 chips and would hold 1024 Cuda Cores which is twice the number of GTX580(Nvidia's Current Flagship GPU), 2 x 384-bit memory interface and a total of 3Gigs of GDDR5 memory. The clock frequencies however won't be higher than the GTX580's to keep the temps and power consumption under control. The card is likely to have a TDP around the 375W region and would be powered by Dual 8-Pin connectors. The card would hold a large heatsink with a 90mm fan placed in the middle, EVGA also showcased their own monstrosity back at CES2011 which was a dual chip based card and you can see it here. You can see that below: 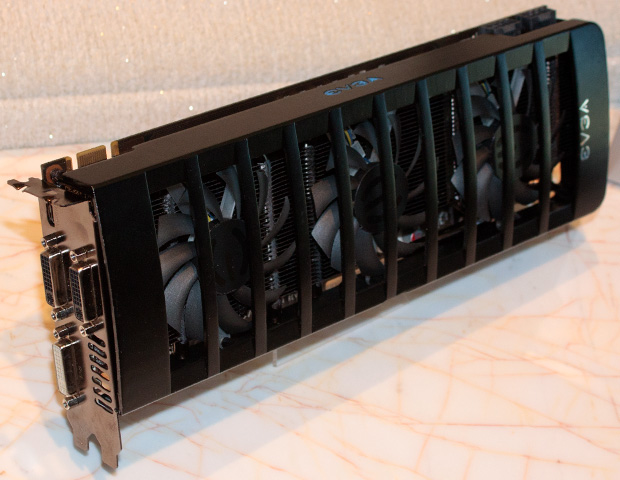 If the card does come out in February than it'll be put against the Rival HD6990 Antilles based card which has recently been revealed and features 3072 Stream Processors and holds a 4GIG memory.