Nvidia has recently unveiled its AAA Ubisoft Title bundle, dubbed 'pick your path', that will ship with both the GTX 970 and the GTX 980 for an added value of approximately $60. Currently as the pricing stands, this makes the Geforce GTX 970 at $299 one helluva deal – provided Nvidia gets its act together and deals with the GPU shortage. 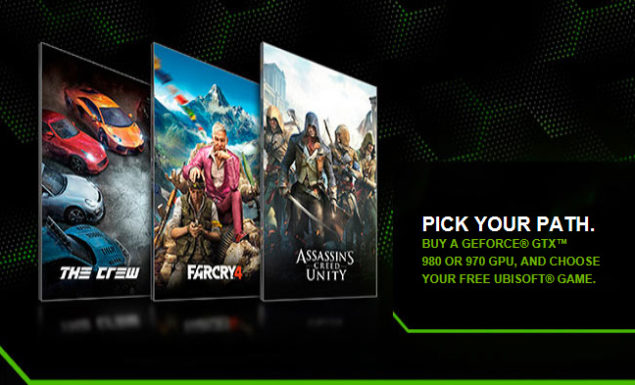 The games that are included in this package are “The Crew”, “Assassins Creed: Unity” and “Far Cry 4”. All of the games are highly anticipated titles and it seems that Nvidia is finally responding to AMD’s absolutely brilliant Never Settle promotional bundles. Nvidia has bundled games in the past but to be honest, nearly all of these offered very little value or entirely uninteresting titles. This time however, all three of the games included are high demand.

“Nvidia has worked hard, hand-in-hand with our development teams, to help provide the best experience for our PC players,” says Jean-Francois St. Amour (lead programmer at Ubisoft Montreal), “Their support and insight is even more important now, as we make a big technological leap into the next-generation of Assassin’s Creed games.”

Since all titles support a price tag of $60, this is a value addition of sixty bucks no matter which 'path' you chose with your new 970 or 980. While it still remains a good deal with GTX 980, the value of the GTX 970 has never been higher. The PR mail also mentions that this promotion may vary according to region and locale. The games will be one of the first titles out on the market to utilize Nvidia display tech (most of these libraries are proprietary) such as Nvidia Godrays, Nvidia HairWork, Nvidia TXAA and Nvidia PCSS (percentage-closer soft shadows). Some of these are part of GameWorks while others are mostly stand alone features. There is word that this particular offer will be available on GTX 7xx and Mobility Maxwell as well.