Lets start with the Geforce GTX Titan X first (customary warning: this is a placeholder name; no idea what the GM200 based GPU is called). Based on the GM200, Maxwell Core, the GTX Titan X is thought to be fabricated on the 28nm node with a die size of approximately ~550mm^2. It allegedly features 3072 CUDA Cores in approximately 24 SMMs. On the mathematical side of things, fabrication process doesn't matter, since the only thing it is used for, is the accommodation of more cores in one die. However, architecture matters a lot. The default equation system of this VGA Calculator was based on Kepler architecture, so we see DG Lee multiplying the CUDA Count and TMUs with 1.35 to get approximate scaling for the Maxwell architecture. Without any further ado, here are the resulting benchmarks: 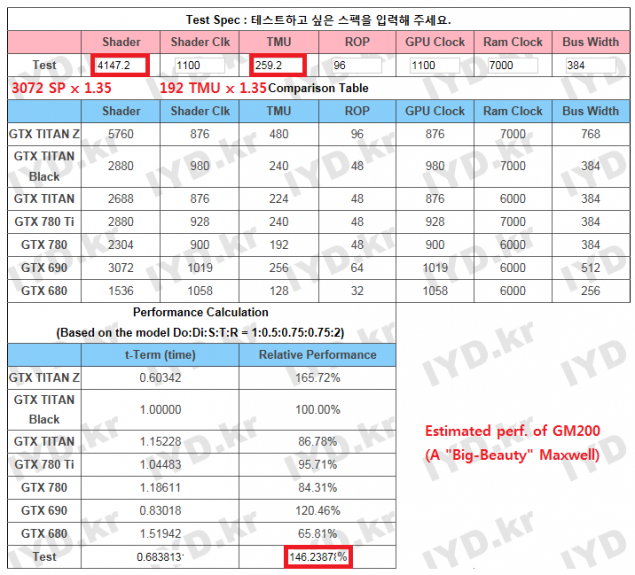 So once again, we get a number very near to the 50% golden increase we have been hearing so much about. The relative performance increases is 46.23% to be precise and is quite the jump, especially if you consider that Nvidia is doing this on the 28nm process in all likelihood. We then come to AMD's FIJI XT GPU. Since the equation system is not designed to handle HBM, we see DG Lee accounting for it by changing the values of Memory Frequency and Bus Width instead. However, he goes through two possible specifications of R9 390X. One that has 64 ROPs and one that has 96 ROPs. The difference between the two is quite huge and it goes on to show how the specs most people just look over can sometimes contribute to impressive boosts. Here are both scenarios of the R9 390X:

If these simulated benches are correct, and looking at all the correct past forecasts, these probably are, than we are looking at a very close competition between the R9 390X Fiji and GM200 Titan X GPU. A difference of 2% in theory accounts for almost nothing in real life where ideal conditions don't exist and things such as unoptimized drivers can make a night and day difference. It was however, interesting (imo) to see how the math of it all adds up.