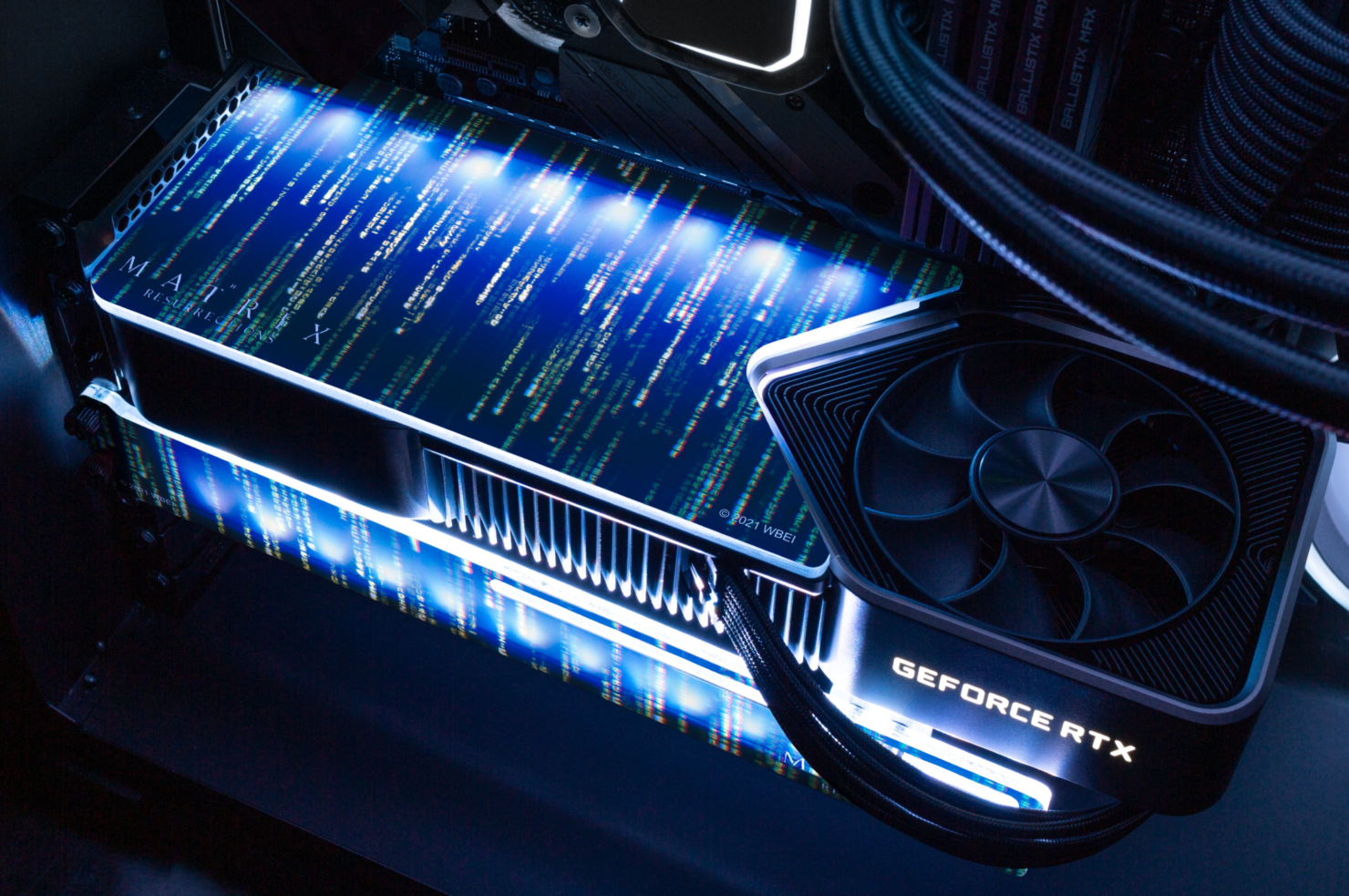 Moore's Law is Dead has posted some meaty information regarding NVIDIA's GeForce RTX 40 'Ada Lovelace' GPU lineup. The new rumors include all the way from launch and performance details to the full lineup and what we can expect from each tier that the green team is going to offer later this year.

Most of the information that MLID has shared is something that we have come to know over the last couple of months and more recently in the NVIDIA leak which revealed not only the GPU code names but also the exact core configuration that we will be getting in the next-generation lineup. 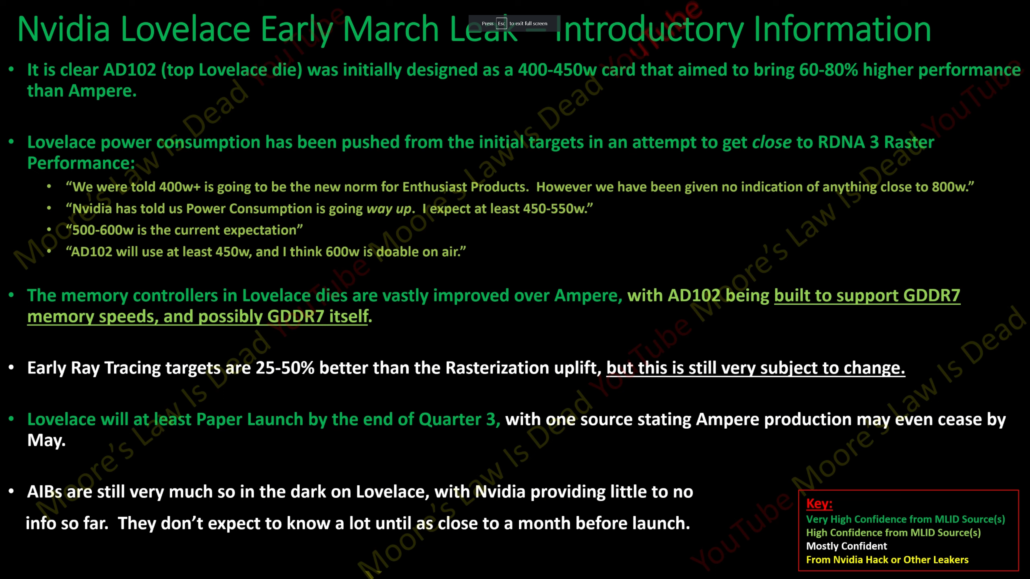 Power Consumption Maxing Out at 600W For Ada Lovelace Flagship?

Starting with the details, it is clear that NVIDIA is pushing the power figures for its entire GeForce RTX 40 'Ada Lovelace' GPU lineup compared to their initial targets. Hence it is why we have been hearing some absurd rumors of power figures going up to 850W but those are just internal test cases and MLID states that the nominal power consumption of the flagship AD102 GPU die will land somewhere between 500-600W and the upper limit is doable on air-cooling thanks to AIBs already invested in triple and quad-slot cooling solutions with hefty heatsinks. Anything above is going to require more serious cooling solutions and we can see liquid-cooled or hybrid models featured on the ultra-premium GPU variants.

NVIDIA is already investing development around the new PCIe Gen 5 connector that offers up to 600W power input per connector. The delayed GeForce RTX 3090 Ti is one example where the card is expected to rock at a TGP of 450W and will be the first desktop graphics card to utilize such a connector interface. The next-gen cards are also expected to utilize the same PCIe standard.

One interesting thing mentioned by MLID is that his sources seem to be reporting the inclusion of GDDR7 memory controllers within Ada Lovelace GPUs. Now NVIDIA is yet to offer the full GDDR6X speeds (24 Gbps) on any of its graphics cards and even the upcoming RTX 3090 Ti is only expected to utilize just 21 Gbps G6X modules so there's still some room left for the memory standard. It is likely that this could be more of a future-proofing move by NVIDIA where they could initially offer Ada Lovelace Rev.1 on GDDR6X memory and move to GDDR7 with an Ada Lovelace Rev.2 refresh (RTX 40 SUPER?) later on.

The GDDR7 memory is expected to offer up to 32 Gbps transfer speeds along with a real-time error protection technology. A GDDR7 memory sub-system across a 256-bit wide bus interface at 32 Gbps transfer speeds will offer 1 TB/s of total bandwidth. That's 1.5 TB/s with a 384-bit bus interface and up to 2 TB/s on a 512-bit system. This is just insane amounts of bandwidth for a GDDR standard.

According to the leak, NVIDIA will have at least six GPUs within its Ada Lovelace lineup. These will include AD102, AD103, AD104, AD106, AD107, and AD10B. The first five SKUs will be designed for the desktop and mobility segments and featured in both GeForce RTX 40 and RTX Workstation solutions. 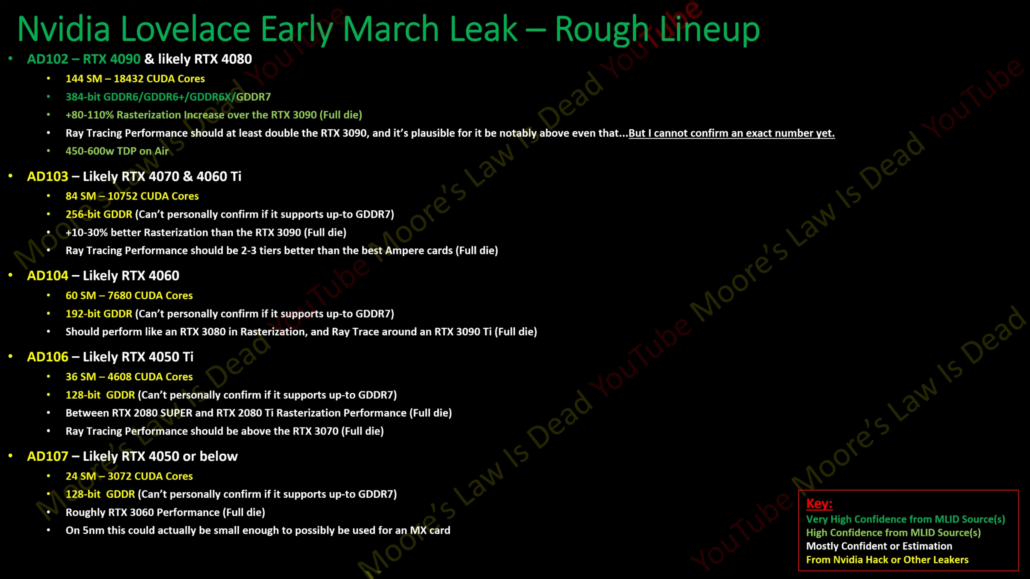 MLID only reports with confidence on the AD102 GPU rumors and other performance data are mostly his speculation which are provided below:

So starting with the leaked SKUs, the top AD102 GPU which is likely going to power the next-gen GeForce RTX 4090, RTX 4080 Ti graphics cards will make use of 144 SMs, a 71% increase over the existing GA102 GPU and house a massive 18,432 CUDA core count. The interesting thing here is that the AD102 GPU is the only SKU that is getting over a 50% increase in SM count & considering what we have heard about the flagship chip, in terms of performance and power consumption, it looks very likely that NVIDIA is going all out with its top chip in the Ada Lovelace family.

The AD103 GPU will replace the GA103 GPU which was recently introduced on mobile and feature the same SM count as the GA102 GPU at 84. The AD104, AD106, and AD107 GPUs will feature 60, 36, and 24 SM units, respectively. Besides the AD103 GPU which is a 40% SM increase over GA103, every other GPU gets a 25-20% SM count increase over its predecessor. It's not as significant as the AD102 GPU but considering this is the mainstream segment, we are likely going to get RTX 3080 or similar performance out of an RTX 4060 Ti & RTX 3070 or higher performance out of the standard RTX 4060. The RTX 4050 should be close or on par with an RTX 3060 given the addition of IPC and clock improvements aside from architectural upgrades. 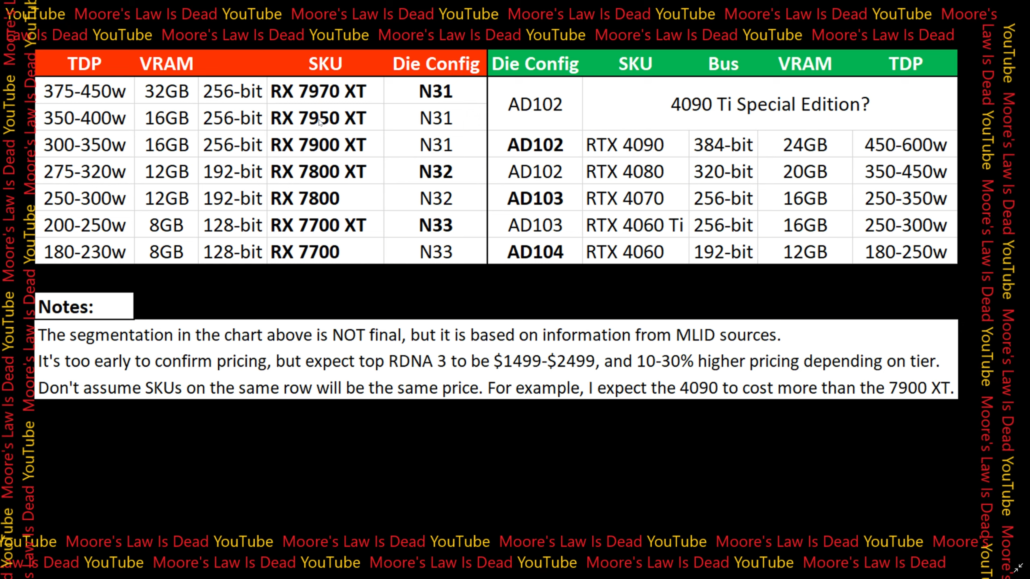 The NVIDIA Ada Lovelace GPU family is expected to bring a generational jump similar to Maxwell to Pascal. It is expected to launch in the second half of 2022 but expect supply and pricing to be similar to current cards despite NVIDIA spending billions of dollars to acquire those good good TSMC 5nm wafers.