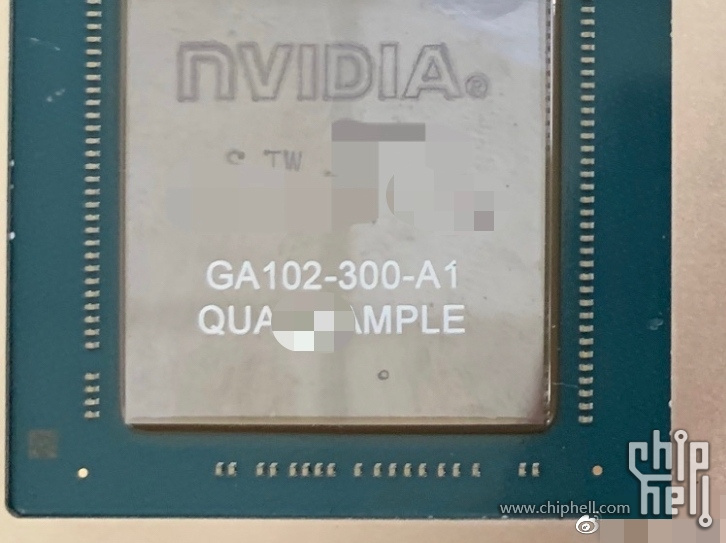 The first picture of NVIDIA's Ampere GA102 GPU which will be powering the next-generation GeForce RTX 3090 & GeForce RTX 3080 graphics card has leaked out over at Chiphell. NVIDIA flagship gaming graphics cards will be making use of the GA102 GPU to deliver unprecedented performance gains over the Turing TU102 GPU core.

[UPDATE 26/08/20] - Rogame has posted a more detailed analysis of the leaked GA102 GPU die. The die was mirrored to complete the entire package and it turns out that the GA102 GPU could measure around 628mm2 which is slightly smaller than the TU102 GPU die (754mm2). What is interesting about this die size projection is that it ends up near to what Kopite7kimi had reported back in July. The leaker reported a die size of GA102 to be exactly 627.12mm2.

Posted by Chiphell user PolyMorph, the die seems for the NVIDIA GeForce RTX 3090 graphics card which is more or less confirmed to be the flagship gaming offering in the Ampere GeForce RTX 30 series lineup. The specific chip is the GA102-300-A1 and this SKU has previously been hinted to be utilized by the flagship GeForce RTX 3090 graphics card. The GA102-300-A1 chip pictured is in the qualification state but we also got to see pictures of Qual-Sample GPUs on several pre-productions PCBs.

Moving on to the GeForce RTX 3080, the rumor reports that the card will be featuring the GA102-200-KD-A1 SKU. This cut down SKU will feature the same 4352 CUDA cores as the RTX 2080 Ti that will be arranged in a total of 68 SMs. The card is reportedly going to feature up to 20 GB of memory that is also going to be GDDR6X. Assuming the memory is running at 19 Gbps across a 320-bit bus interface, we can expect a bandwidth of up to 760 GB/s.