We live in a world where graphics cards on retail shelves are a distant memory and companies are using the weirdest of names and designs for their products. EMTEK & MAXSUN, two manufacturers (exclusive to NVIDIA) based in the Asian-Pacific market, have released their brand new GeForce RTX 3060 cards, one that uses a unique design while the other one uses a naming scheme that doesn't make any sense at all.

EMTEK, which is primarily based in South Korea, has launched its GeForce RTX 3060 MIRACLE card. The card retains the reference specifications of the GeForce RTX 3060, featuring 3584 Cores, 12 GB GDDR6 memory and even the clock speeds are set at reference speeds of 1320 MHz base and 1777 MHz boost. The card features a TDP of 170W and is powered by a single 8-pin connector. But forget about the specs, it's the design that we have to talk about. 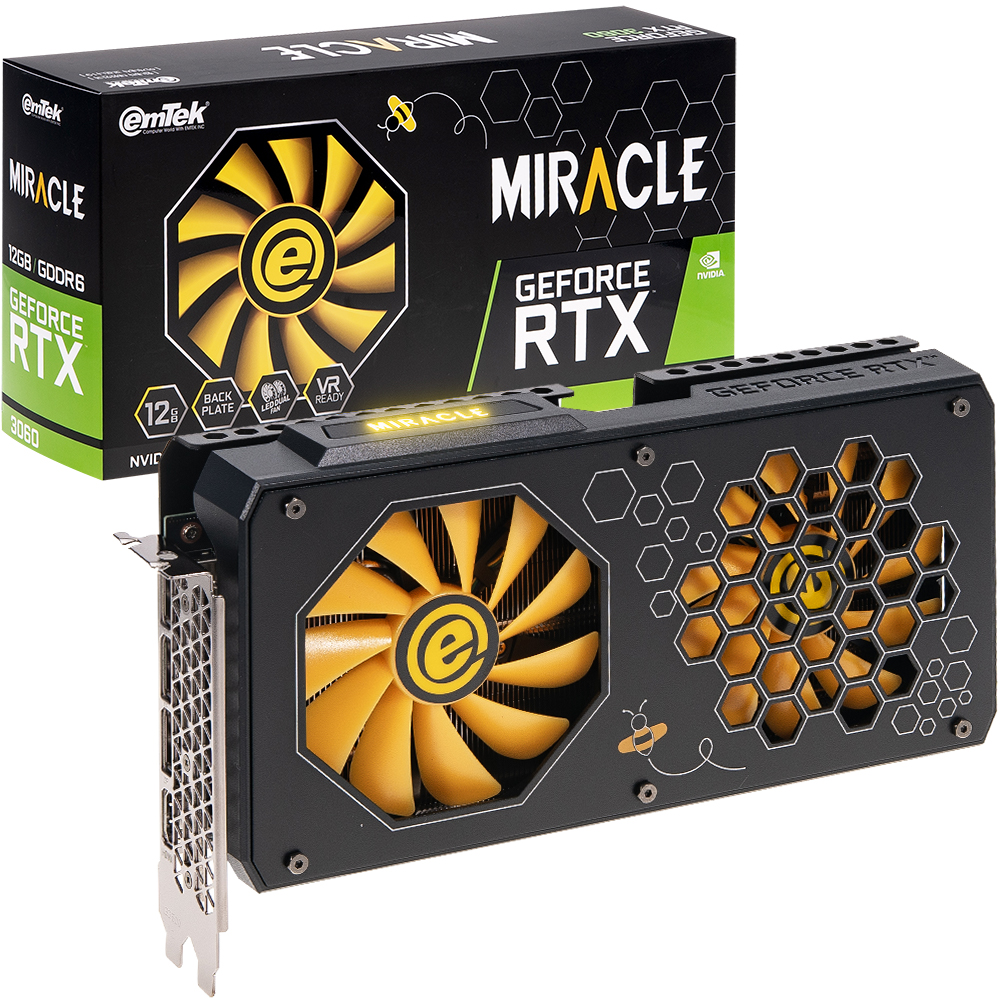 The card features a reference PCB design and a 2.5 slot form factor. It comes with a wide shroud & backplate that extends beyond the PCB. The sides of the shroud feature the 'GeForce RTX' label & a Miracle badge that lights up with RGB LEDs. The front of the shroud features two fans, both colored orange and the second fan to the rear end of the shroud has a unique honeycomb design. While it does look cool, we don't know why this design choice was made by the engineers at the company since it can prevent proper airflow and result in higher temperatures compared to leaving the fan open like the one on the front. Other than that, you can see a honeybee printed over the shroud & that's about it for EMTEK's GeForce RTX 3060 Miracle.

Next up, we have the MAXSUN GeForce RTX 3060 BIG MAC. The card features a reference PCB too which features stock clock speeds and specs of 3584 CUDA Cores, 12 GB GDDR6 memory, a 1320 MHz base, and a 1777 MHz boost clock with a TDP of 170W that is powered through a single 8-pin connector. The card features a dual-slot and dual-fan design which is as long as the PCB itself.

The plastic shroud has nothing much to talk about and the card does come with a backplate & a heat-sink that uses several aluminum fins but we are trying to figure out what made MAXSUN decide to use Big Mac as the naming scheme of this card as it looks nothing like one. It is possible that the design and marketing team over at MAXSUN were enjoying KFC's Big Mac meal while working on this card, hence the inspiration.

Lastly, since we are on the topic of NVIDIA's GeForce RTX 3060 graphics card, I thought that the ASUS GeForce RTX 3060 Phoenix deserved a mention too. The card isn't weird at all but actually features a nice and well-designed Mini-ITX cooler. The card comes with a custom PCB and pushes things further with a factory overclock of 1807 MHz, up from 1777 MHz. The card is powered by a single 8-pin connector and has a 2.5 slot form factor.

In terms of design, the RTX 3060 Phoenix has great aesthetics on the front with a brushed metal shroud with incorporates a large axial-tech fan while the back is complemented with a backplate. The heatsink is composed of several aluminum fins which also feature three large heatpipes. The card is expected to launch in retail early next month.