A Picture of Nvidia's Upcoming GeForce GK-110 chip based on the 28Nm Kepler Architecture has been posted on Chinese Forum diybbs.zol.com.cn. The GK-110 would be the successor to GF-110 Fermi chip on which the GeForce GTX580 is based. 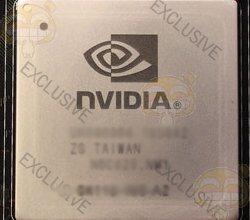 Not much details are known except the code number on the chip which reads " GK110-???-A2". It is also being said that the release of the card is expected some time in March-April 2012 after the alleged launch date of the Performance Tier GK-104 parts which is February-April 2012. The GK-104 seems to consist of two GPU's, A 560Ti replacement "GTX660" which is rumored to be as fast as a HD7970 and a Higher End "GTX680" GPU. What GPU the GK-110 chip would use is yet unknown!

A few leaked specs plus a set of benchmarks which keeping in mind the current rumors seem to be slightly correct (Such as GTX660 outperforming GTX580 and nearing HD7970 levels) are posted below: