NVIDIA has just announced their latest GeForce GTX Holiday bundle at their 'The Way Its Meant To Be Played' event ongoing in Montreal. The GeForce event would end on 21st October and NVIDIA would announce new game invoations and technology demonstration at the event in addition to a super secret announcement that isn't related to a GPU at all. 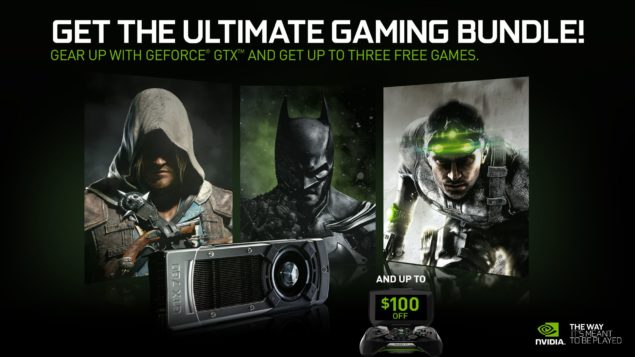 The NVIDIA GeForce GTX Holiday Bundle would be announced for a variety of GeForce 700 and GeForce 600 series cards. The top tier GeForce GTX Titan, GeForce GTX 780 and GeForce GTX 770 buyers would be awarded with Assassins Creed IV: Black Flag, Batman: Arkham Origins and Splinter Cell :Blacklist automatically adding $150 value to these cards. In addition to this, the buyers would also get a $100 US discount on NVIDIA's Shield hand-held gaming console.

The GeForce GTX Holiday Bundle would go live on October 28th and end on November 26th and would be limited to North American buyers though the bundle may go live in some places in the UK region. Nevertheless, the bundle sounds amazing for those living in North America and is definately aimed towards AMD's Never Settle bundle which has been missing on the AMD Radeon R200 series cards though may appear on the new cards later on as hinted yesterday. 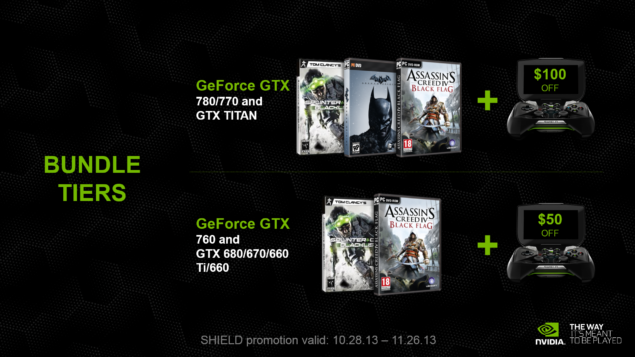 Stay tuned for more information regarding the NVIDIA The Way Its Meant To Be Played since alot of announcements are going to take place that would entice gamers up with the high possibility of a new graphic card and something else specially built for gamers.

All of these games offer enhanced experiences on GeForce graphic cards such as the addition of PhysX, advanced Anti-Aliasing algorithms support. NVIDIA is also working on other titles such as the recently delayed Watch Dogs from Ubisoft and the much anticipated Witcher 3: The Wild Hunt which adds in the new NVIDIA Fur technology.

Witcher 3: The Wild Hunt would feature like smooth and fluid animations, soft shadows, HBAO+ (horizon-based ambient occlusion) and advanced DX11 tessellation. Aside from these, the game would also feature the latest Fur tech technology.

Batman: Arkham Origins, which is a prequel set in the Arkham Universe starting off from the early days of Batman would let us meet some of the most rivaled villains of Batman for the very first time. The game aside from its amazing storyline would feature PC effects such as  Percentage Closer Soft Shadows, TXAA, Turbulence Cloth Particles PhysX Effects, DOF and HBAO+. The percentage clear soft shadows allow users to view sharper shadows from upclose and soften them up a bit while viewing from a distance.