The version used for overclocking was NVIDIA's reference Founders Edition card. This goes off to show that even NVIDIA's reference design is geared for massive overclocking potential. The chip was clocked at an outstanding 2.481 GHz on LN2 cooling. During the test, the chip actually boosted way past its clock speed and beyond 2.5 GHz. The GPU memory was clocked at 12.5 GHz, up from 11 GHz which is the stock GDDR5X memory speed for the 11 GB chips being used on the GTX 1080 Ti graphics card. 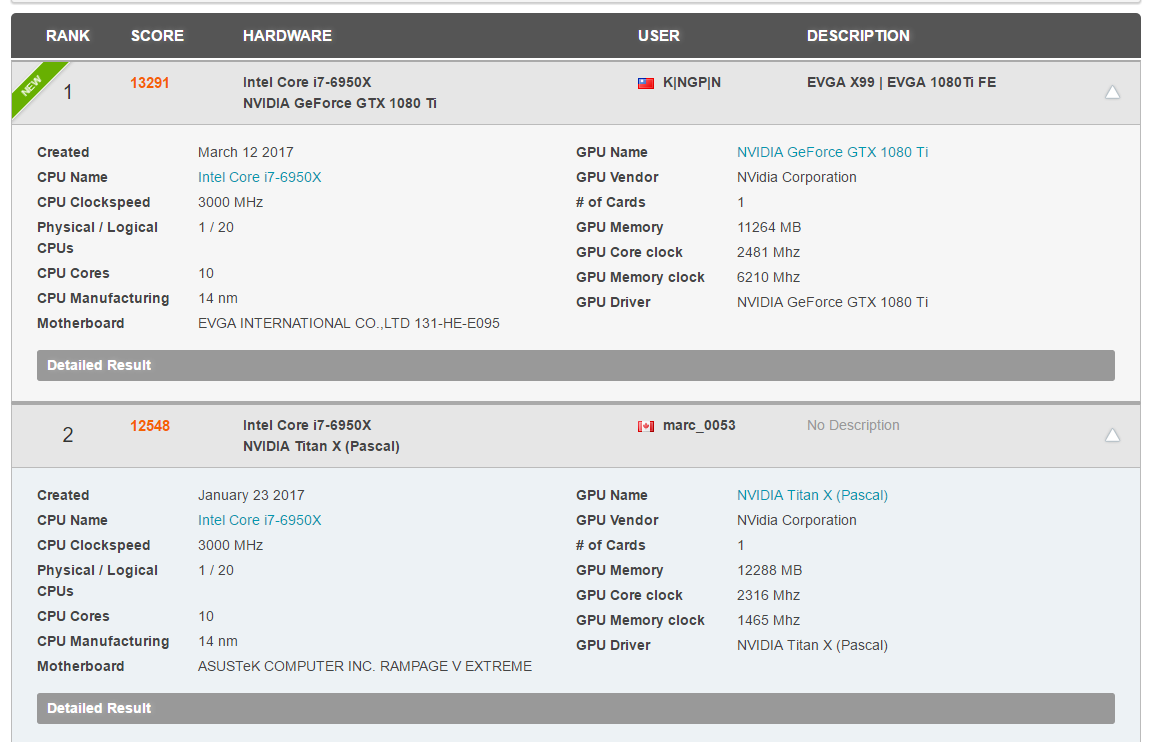 The memory overclock is also worth a mention since we are looking at more than half a terabyte worth of bandwidth on a reference card which is more than anything that's currently offered to consumers on GDDR5/X and HBM2 designs. The GTX 1080 Ti achieves 484 GB/s at its reference memory clock speeds that is nearly what's achievable with first gen HBM. A slight overclock on these chips can hit past the 500 GB/s mark with ease.

With such a heavy overclock, the card achieved a rated pixel fillrate throughput of 197.4 GPixel/s and Texture fillrate throughput 612.7 GTexel/s. The system used included a Core i7-6950X clocked at 5.1 GHz and running on a EVGA X99 series motherboard. The platform also featured 32 GB of quad channel DDR4 memory clocked at 3200 MHz.

With such specifications, the system achieved a score of 13,291 points in 3DMark Timespy benchmark. The Graphics card achieved a score of 13,120 points. Compared to the previous record held by the Titan X(Pascal) at 2.3 GHz which achieved a graphics score of 12,316, this is a really impressive score. It is also stated that the GeForce GTX 1080 Ti at stock achieves around 9000-9500 points at stock clocks so this overclock yielded a 45% increase in performance which is shocking.

The NVIDIA GeForce GTX 1080 Ti Founders Edition isn't just a great LN2 overclocker, but it also overclocks well on air and liquid coolers. This is all thanks to the new reference design which packs a high-end PCB. The new PCB is modified with 250 Amps of power and comes with a 8-phase dual-FET design. This gives a total of 14 DualFETs on the PCB which deliver increased performance, more overclocking potential, high stability and last but not least, superior efficiency.

The Founders Edition of the GTX 1080 Ti is actually so popular in the market that it has already been sold out a few days after launch. This is impressive considering we are talking about a premium grade card that retails at $699 US. The card is a success but for those who are waiting for more supply to come, NVIDIA's AIB partners are preparing a grand lineup of custom cards for launch later this month. We will do a custom model roundup once more of these models show up.