During a webinar hosted by Khronos Group, NVIDIA was questioned whether they will add GeForce 500 series to support list for the Vulkan API. NVIDIA's Engineer, Jeff Bolz stated that they are not planning to bring Vulkan support to their Fermi cards which is not due to an engineering issue but rather an install base issue. The quote is posted below:

"We are currently not planning to support for 4-5 (Fermi) class GPUs. It is not an engineering issue, it's an install base issue. So if that causes you pain, please contact your local NVIDIA representative and let me know."

While NVIDIA is openly stated that they are not planning to support GeForce 400 and GeForce 500 series cards with Vulkan API, that still doesn't mean that the GPUs are designed to run Vulkan. In fact, NVIDIA has long been stating that Vulkan GPU support is offered on their Fermi cards but it seems like the issue is not with how these graphics chips were designed but rather with their install base. We know that NVIDIA captured a large market share with their Maxwell graphics cards and they had a large chunk of users who were Fermi owners upgrade to either Kepler or Maxwell. It should be noted that Fermi GPUs are already as much as 6 years old. The NVIDIA GeForce 400 series launched back in 2010 and was followed by the GeForce 500 series just a year later.

The Fermi owners are long overdue for an upgrade and most of the users have already switched to a better graphics card. Considering how a GeForce GTX 950 performs better and more efficient than the flagship Fermi (GTX 580) graphics cards, that would have given users enough reason to upgrade from their older graphics cards. Still there could be a good sum of users who are running Fermi based graphics cards in their PCs. Our own pal "Usman Pirzada" is running a GeForce GTX 580 in his rig although he expects to upgrade it to either Polaris or Pascal later this year.

Still it would have been nice to see Vulkan API support on legacy graphics cards even with a smaller user base but development and support comes at a cost and given the tiny user base, that doesn't seem like a viable option for NVIDIA to opt for. AMD on the other hand will be offering similar Vulkan support that will be available on all of their GCN based graphics cards starting the Radeon HD 7000 series cards. Everything pre-GCN is not supported in the Vulkan framework. Both the Kepler and GCN based cards were launched back in 2012 and still have a decent user base since the generation of cards lasted up till 2014. 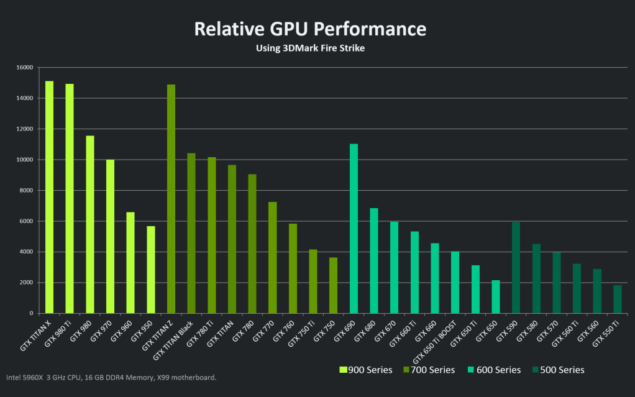 For Kepler and Maxwell, NVIDIA has shown full support on both Windows and Linux based operating systems. Their launch drivers of Vulkan API are available for the GeForce 600, GeForce 700 and GeForce 900 cards on Windows, Linux and SteamOS.