Today, the Khronos Group has released the official specifications of the Vulkan 1.0 API with the Industry leaders rallying behind with support. Based on the Mantle API, the Vulkan API promises to provide modern low-level capability across all platforms and devices. Both AMD and Nvidia have released their primary support drivers for Vulkan API.  These primary support drivers are currently in their beta state but should be able to run any Vulkan based application that is released for early adopters.

The story of Vulkan starts with Mantle API. Mantle as we knew it, is no more. However, the API still exists and the partially developed ecosystem does as well. To put it bluntly Mantle API split into two offshoots: the Vulkan API, champion of the open world and Mantle API as it is now, a relatively proprietary system that AMD will use inhouse and will only appear in select use cases (eg: LiquidVR). Vulkan aims to be bigger and better than what it once was. It is the only low level API that supports every single platform in existence. As such, a lot is riding on it and interest from key players is quite high. Google also plans to deploy and promote it as the API of choice of next generation Android games. 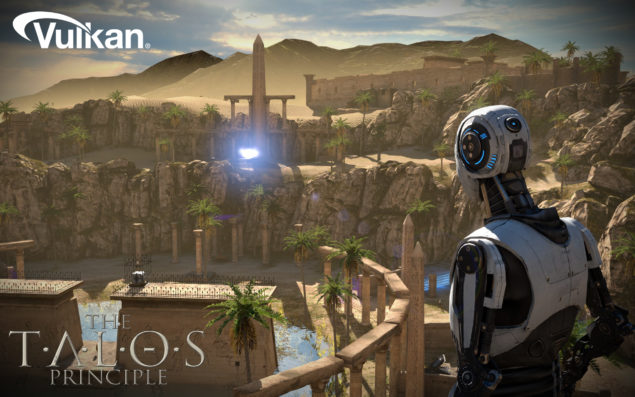 Vulkan API was designed from the ground up, to not only provide to the metal access to the GPU but also keep all the mainstreams platforms in mind. Since it’s based on Mantle, and is redesigned from scratch, the documentation should be pretty clean at this point. Another big advantage over OpenGL that it possesses is a multi-core friendly architecture. Where OpenGL didn’t allow generation of graphic commands in parallel to command execution, Vulkan happily allows multiple command buffers in parallel. Basically, in CPU with 8 threads, previously what happened was a sort of haphazard attempt at queuing with little to no dispersion over the threads.

“We are extremely pleased at the industry’s rapid execution on the Vulkan API initiative.  Due to Vulkan’s cross platform availability, high performance and healthy open source ecosystem, we expect to see rapid uptake by software developers, far exceeding the adoption of similar APIs which are limited to specific operating systems,” said Gabe Newell, co-founder and managing director, Valve.

“The release of the Vulkan™ 1.0 specification is a huge step forward for developers. The Vulkan API, which was derived from Mantle, will bring the benefits of low-overhead high-performance Graphics API to the benefit of cross-platform and cross-vendor targeted applications,” said Raja Koduri, senior vice president and chief architect, Radeon Technologies Group, AMD. “The promotion of open and scalable technologies continues to be the focus at AMD, as a pioneer in the low-overhead API space. As a member of the Khronos Group, AMD is proud to collaborate with hardware and software industry leaders to develop the Vulkan API to ignite the next evolution in PC game development.”

It looks like the folks over at Computerbase.de have already done some testing using the new beta drivers and the Vulkan API. According to their results, the Vulkan API is slightly behind the DX11 API. I would urge readers to treat this one with caution since we have no way of verifying these results right now. We are going to be doing our own testing and report back as soon as possible.