NVIDIA Faces “Little Further Downside” as “Crypto-winter Risk” Is Fully Priced in Amid Waning Demand for Cryptocurrency Mining, as per a Wall Street Analyst NVIDIA (NASDAQ:NVDA), a major manufacturer of graphic cards, continues to feature regularly in the "most mentioned" list of stocks as investors try to extrapolate future trends amid an onslaught of headwinds, moderated by a few hefty tailwinds. 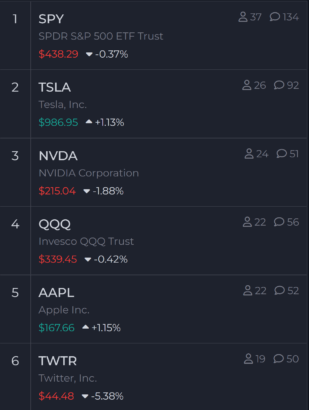 As is evidenced by the snippet above, NVIDIA was the third most popular stock symbol over the past 24 hours, a feat that it repeats quite often. Against this backdrop, the latest investment note from New Street has again shone a spotlight on the stock's prospects.

To wit, New Street analyst, Pierre Ferragu, has now upgraded the rating for NVIDIA shares from neutral to buy along with a $280 stock price target, equating to an upside potential of around 30 percent relative to the current share price.

Specifically, Ferragu cited improved visibility on "crypto-winter risk" as a major stimulant behind this upgrade. The analyst conceded that Ethereum's hash rate quadrupled between October 2020 and January 2022, contributing around $2 billion to NVIDIA's top-line FY 2022 metric. However, given that mining demand has "largely gone away" and GPU retail and second-hand prices have started to normalize, this slowdown has been almost completely priced in, as evidenced by the fact that NVIDIA's relative multiple has contracted by 25 percent since November 2021. Therefore, the analyst sees "little further downside, as long as data center remains strong."

Crucially, the New Street analyst believes that any further crypto-related weakness would be "limited, short-lived, and only an opportunity to add to positions," especially as the secular outlook for gaming, visualization, and datacenter is "still very strong."

Of course, Baird recently took a diametrically opposite view on NVIDIA, downgrading the stock to neutral from outperform and lowering the share price target to $225 from $360. Baird analyst, Tristan Gerra, had cited order cancellations prompted by excess inventories, a slowdown in consumer demand, and the Russia embargo as the primary stimulants behind this downgrade.

Bear in mind that NVIDIA had revealed at its GTC 2022 event last month that it was now targeting market opportunities worth at least $1 trillion, spread across its gaming, AI, hardware, and automotive segments. As per the statement of the company's CFO during the event, NVIDIA could be looking at a whopping gross margin of 67 percent in the current fiscal year (FY 2023).

NVIDIA stock is down around 13 percent in the past five trading days. Since the start of the year, the stock is down over 28 percent.