Graphics processing unit (GPU) designer NVIDIA Corporation expects to earn record revenue during the current quarter as it reports the first full quarterly sales of its GTX RTX 30 'Ampere' consumer and enterprise GPU lineup today. NVIDIA, which has been at the center of press attention due to its $40 billion attempt at acquiring British design house Arm Ltd. was up by 3% in aftermarket trading at 16:43 EST today after the company reported a whopping 59% year-over-year revenue growth for its fiscal year 2021 at the close of trading today. Yet, an hour later the price dropped by 2.5%, reversing the gain.

The big story for NVIDIA's fourth-quarter earnings is its Gaming revenue. At the end of the third quarter, the Santa Clara, California company reported $2.2 billion in revenue from the segment, as it settled in after launching the highly anticipated Ampere graphics cards.

This launch was however marred by inventory problems and NVIDIA struggled to keep up with demand - a factor that continued during the previous quarter as demand for the product outpaced retailer supply. NVIDIA's chief financial officer Ms. Collete Kress warned investors about this phenomenon during the earnings call for the third quarter earnings, with the executive stating that she expected, "few more months for product availability to catch up with demand". 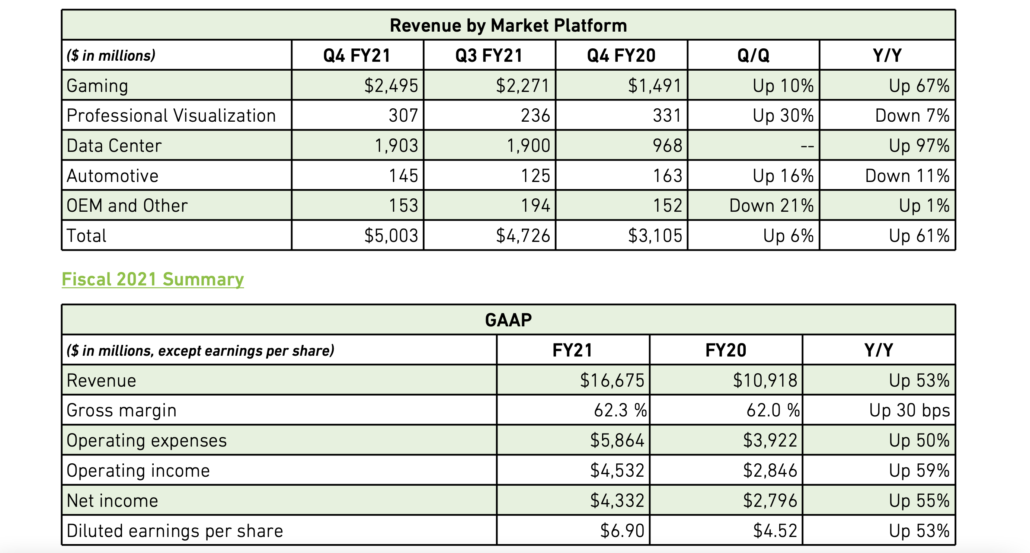 So naturally, NVIDIA's fallen short of reaching its full Gaming potential in the last quarter despite reporting $2.5 billion revenue, yet sales from this segment has helped the company maintain an overall growth trend during a time period during which it performed roughly in line with the preceding quarter for all other segments.

The fourth quarter also saw the company's Add-in Board partners reintroduce the year-old GeForce RTX 2060 Series back into the market to keep with the demand for computing products following a shift to remote work and entertainment in the post-pandemic world and NVIDIA looked to clear its inventory.

The sequential growth is reasonable as it shows the company's attempts to deal with a supply shortage and growing demand for chips from foundries. Accounts Receivable and Days Sales Outstanding decreased during the quarter in a positive sign, indicating that NVIDIA is not having trouble clearing products.

The second big highlight of the quarter was static datacenter sales, which managed to maintain third-quarter levels despite a drop contribution from Mellanox. NVIDIA has reported "double-digit" data center compute product growth during the fourth quarter, which according to the company has let it offset the declining Mellanox contribution. Mellanox had contributed 30% to NVIDIA's revenues in the prior quarter, and contribution for FY 2021 stood at 10%.

Finally, during its current quarter, NVIDIA expects to earn $5.3 billion in revenue, to mark for 71% year-over-year growth. It also expects to maintain operating expenditures at levels of the previous quarter. NVIDIA also prepaid $427 million to Arm Ltd. in royalties during the third quarter, and the company uses Arm's designs for its Bloomfield DPU lineup.

Wall Street analysts were full of optimism heading into today's earnings, as reflected by price target increases all around. NVIDIA earned $4.3 billion GAAP Net Income during the fiscal year 2021 for a 75% year-over-year growth and $1.4 billion GAAP Net Income during the fourth quarter for a 53% year-over-year growth. Revenue for the quarter stood at $5 billion, which is roughly in line with what the company expects to bring in during the current quarter.