NVIDIA CEO: I Can’t Imagine A Better Way To Game Than BFGD, The Response Is Completely Over The Top 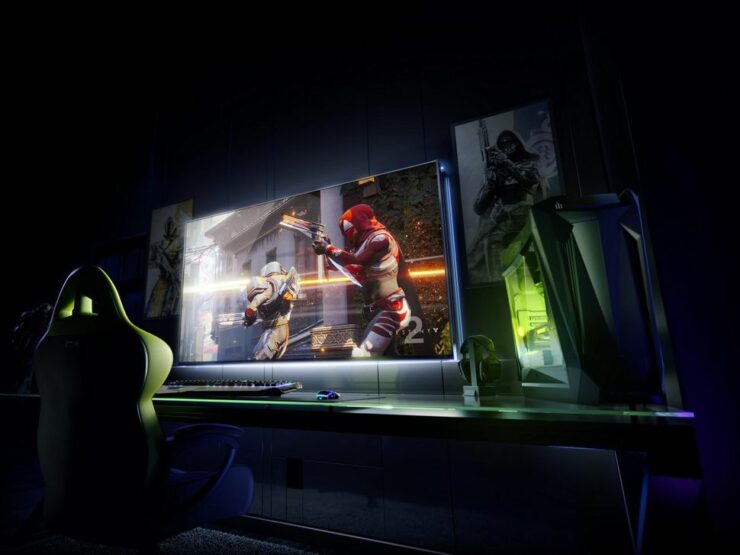 CES 2018 might be over, but that doesn't mean we're not getting any more information from the event. Perhaps NVIDIA's most unexpected announcement from CES 2018 has to be the BFGD or Big Format Gaming Display. These 65-inch 4K 120Hz HDR displays with built-in G-SYNC and SHIELD have impressed those who want the ultimate PC gaming experience.

In a lengthy interview published yesterday by VentureBeat, NVIDIA CEO Jen-Hsun Huang talked a bit about the BFGD and the response from those who were lucky enough to check these displays out at CES 2018 (such as our own Keith).

Then we said, “What else can we do to expand the reach of gaming and take the experience to a new level?” We always thought it would be great if we could take PC gaming, which is already amazing, and put it on the one display that we always wished it would be on: the largest display in your house. What would you call the largest display in your house? It’s the BFG display. So we called it BFGD, Big Format Gaming Display. [laughs] That’s what it stands for. It never gets old.

BFGD is G-Sync, 120Hz, and so there’s literally no stutter. If it’s running at 120Hz there’s no stutter, of course. You can’t feel it. If there’s any changes in framerate, G-Sync kicks in and there’s no stutter. It’s just smooth, low latency, high dynamic range, huge format. I can’t imagine a better way to game. The response from the reviewers and gamers I’ve seen is completely over the top. People just love it. You’re engulfed in this virtual world. Life is good.

The first BFGD displays should be out by mid-Summer and they'll be produced by HP, Asus and Acer. There's no pricing information yet, but you can count on these to be expensive - probably even more so than OLED 4K HDR TVs.

Jen-Hsun Huang also briefly touched on the GeForce Now beta, now available on PC as well as Mac. The ultimate goal is to bring it to additional devices, such as a smartphone or a Chrome device, to allow you to play games via cloud wherever you want.

We also added another platform to GeForce Now, our supercomputer at Nvidia with a whole bunch of GPUs in it. It’s running games and streaming them to devices that don’t have enough capability to play games natively. The performance is fantastic. It has our latest generation of GPUs. We’ve been supporting the Mac. The response has been incredible. We have a long waiting list. Recently we also opened it up for PC. Long term, we’d like to be able to make it possible for you to have incredible gaming experiences no matter what device you’re on. It could be a phone, a Chrome device, anything. We just want you to be able to enjoy great games, so long as you have a display.

What was your highlight among NVIDIA's announcement at this year's Consumer Electronics Show? Tell us in the comments.