[Update] The offer seems to extend to the GeForce GTX 980 Ti as well, as it appears that several models of the card are offering the selection of the two Ubisoft titles. So far the Titan X does not, however. 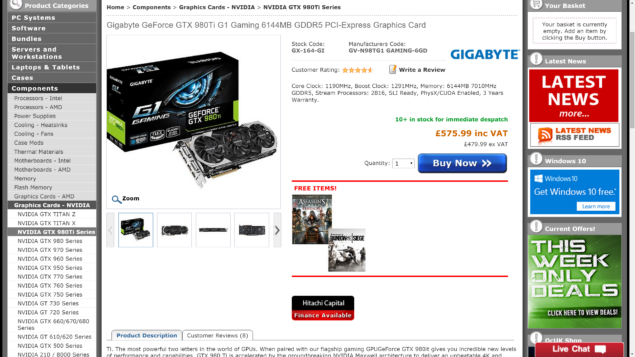 NVIDIA has revealed that purchasers of select GeForce GTX cards will be offered a choice between Assassin’s Creed Syndicate and Tom Clancy’s Rainbow Six Siege. The game will be bundled with the GeForce GTX 980 and GTX970, with the offer being valid until 1/5/2016. Both Ubisoft titles are sponsored by NVIDIA and will likely feature some exclusive NVIDIA technologies. Assassin's Creed Syndicate will release on PC on November 19, 2015, while Tom Clancy's Rainbow Six Siege on December 1, 2015. So far there's no word of whether the offer will extend to other GeForce models, like the GTX 980 Ti and the GTX Titan X, but given that most of Ubisoft's biggest titles were offered with the high-end NVIDIA GPUs in the past, the offer should extend to those as well. The newly announced Far Cry Primal, could serve as another potential bundled title for NVIDIA, when it releases next March. 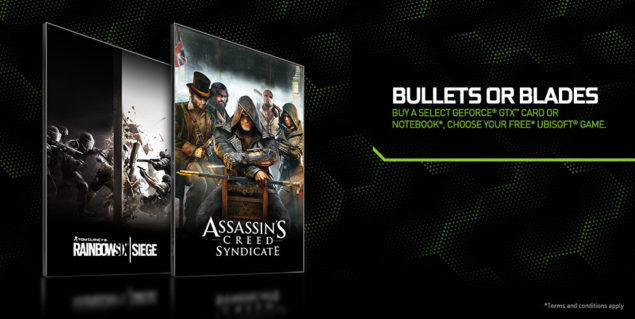 Tom Clancy's Rainbow Six Siege has been gathering favorable impressions from its multiplayer beta, and even though it was visually a bit underwhelming at its available settings, most users were quite pleased with what the game offered.

Assassin's Creed Syndicate will release on PC on November 19, 2015, while Tom Clancy's Rainbow Six Siege on December 1, 2015. We will bring you any news on the NVIDIA bnundles as well as both games as soon as it becomes available.