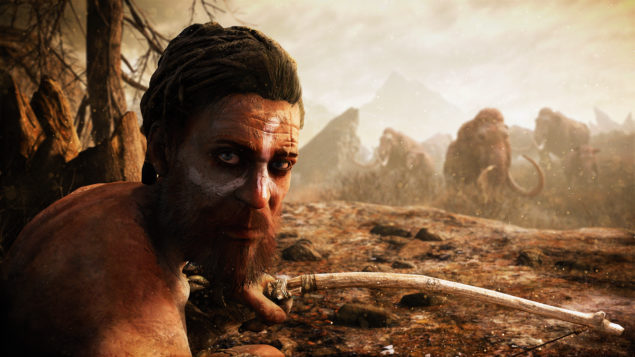 You can already file a pre-order on Amazon and that's where we pulled the very first details on Far Cry Primal.

Welcome to the Stone Age, a time of omnipresent danger and limitless adventure, where giant woolly mammoths and saber-toothed tigers rule the Earth, and humanity is at the bottom of the food chain. As the last survivor of your tribe, you will learn to craft a deadly arsenal, fend off fierce predators, and outsmart enemies to conquer Oros and save mankind.
The award-winning Far Cry franchise that stormed the tropics and climbed the Himalayas now enters the original fight for mankind’s survival with its innovative open world gameplay, bringing together massive beasts, breathtaking environments, and unpredictable 360-degree combat in one savage package.
Be the mammoth! PRE-ORDER NOW to receive the Legend of the Mammoth Mission Pack!

Amazon also added a list of the game's main features.

Far Cry Primal is set in 10,000 BC, during the Stone Age. According to Creative Director Jean-Christophe Guyot, this is the perfect setting for the franchise.

The Stone Age is the perfect setting for a Far Cry game. Far Cry usually puts you at the edge of the known world, in a beautiful, lawless and savage frontier. The Stone Age is, in a way, the very first frontier for humankind; it’s the time when humans put a stick in the ground and claimed land for their own, the time when we started climbing the food chain. That came with conflict against other humans, of course, but also against nature itself.

The main character, Takkar, will have one main goal: survival. The game is set to launch for PlayStation 4 and Xbox One on February 23, 2016, while PC gamers will have to wait for March; take a look at the first screenshots, trailer and creative vision video below.