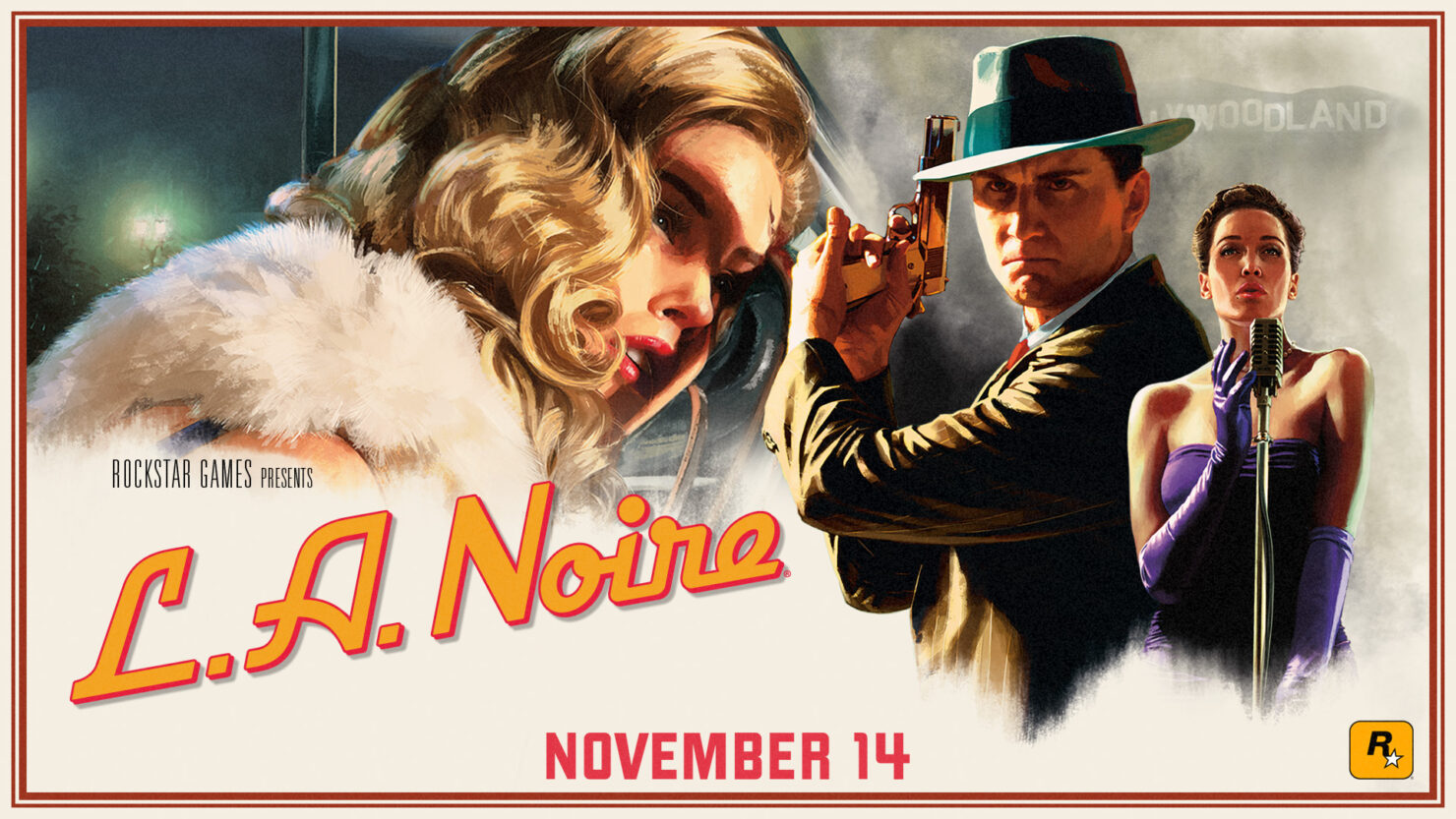 Anyone without an SD card in their Switch is likely already browsing Amazon after the recent news. It turns out games like L.A. Noire on Switch will require a 14GB download - even if you’re purchasing the physical version of the game. Then there’s DOOM, which will have its multiplayer component relegated entirely to a separate, optional, download. Heck, even the DOOM product description on the official Nintendo store specifies that the game will require a hefty 23GB of extra data - not specifying whether this includes the 9GB required for multiplayer. 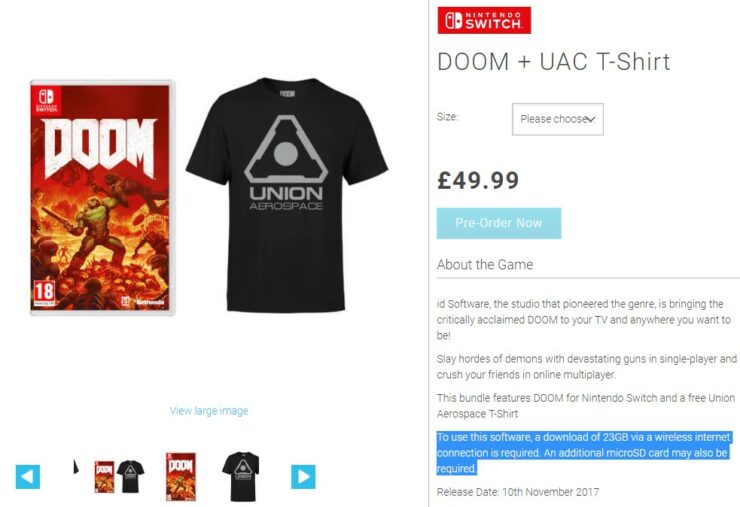 If you have a Switch with no SD card, it’s bad news. The standard Switch has little over 25GB of internal storage; up until now that might’ve fared quite well for fans of digital purchases. The Legend of Zelda: Breath of the Wild is only around 15GB, and Super Mario Odyssey is slightly over 5GB, meaning the internal storage already has enough space for two of the highest rated games of the year, but this storage debacle is only highlighting Nintendo’s continued weak spot; third parties.

Third-party developers don’t need to compress every texture and cutscene to fit on a smaller system - at least, not usually. PC gamers have long been able to host terabytes of games on their hard drives, and even console gamers can update their hard drives if a stock 500GB HDD isn’t enough, and let’s be honest, it’s never enough.

With the Nintendo Switch right now, massive file sizes are scary for players, and for more reason than one. While deleting a game from my PS4 hard drive is an inconvenience, should I ever wish to play it, I can download it again. With my Nintendo Switch, the same systems are in place to delete and re-download games as I see fit, but unlike my PS4, the Switch is often with me, not left at home. With my PS4 I can set a game to download from my mobile phone, but if I’m on the train with my Switch, I’m probably being left offline, and therefore only have the games with me to enjoy. The hyper-convenience of the handheld console has a few drawbacks, unsurprisingly.

But luckily, the Switch has a few advantages, too. Portability is obvious, but another is the console’s power. The Switch is a far weaker console than the PlayStation 4 and Xbox One. No surprises there, but that also means the Switch will, on average, be pushing out less polygons, and less detailed textures. This means that games can be compressed far more efficiently, and full, detailed, AAA releases can come in at file sizes far, far below what we’re used to on other consoles. Mario + Rabbids Kingdom Battle is only 2.4GB on Switch, and Splatoon 2 is only 3.7GB - that’s including all currently released updates and DLC. These are full games, with file sizes coming in around the same size as Blu-ray movies. Though it should be said that Nintendo has much more experience in crafting beautiful looking worlds for smaller and less capable consoles; their file sizes are a by-product of their incredible experience developing for lower-end hardware, where small texture sizes can make a huge difference.

And of course, if you buy these games physically, then outside of update data and DLC, you won’t be making any impact on your Switch internal storage. Indeed, if you decided to buy up all of the first-party releases so far on Switch and invested solely in physical copies, then your Switch storage will be sitting pretty, with only a couple GB used for updates like stages in Splatoon 2 and characters in ARMS. 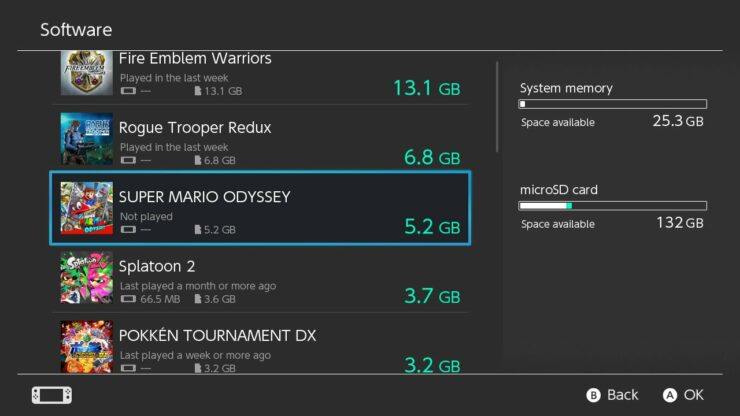 And then, of course, comes the comparison to PlayStation 4 and Xbox One. Yes, it’s true, the console which is smaller than a Blu-ray drive cannot hold as much data as the micro-PCs that are modern consoles, but when it comes to stock storage, is anyone happy with the 500GB they were given with their PS4 or Xbox One? I upgraded to a 1TB drive on my PS4, and yet I’m still having to delete games regularly to fit more on - recently I had to delete The Witcher 3: Wild Hunt, much to my disappointment, as it was taking up nearly 80GB of space on my PS4, when coupled with DLC and updates. And yes, of course, I own a physical version of the game. Not like that matters much when mandatory installs are here to subsidize the slow read and write speeds of the Blu-ray players provided in the PlayStation 4 and Xbox One.

The fact is, a reasonably priced 200GB Micro SD card from Amazon isn’t going to cost that much more than a 1TB 2.5” hard drive from a reputable manufacturer. Yes, it’s about a fifth of the storage for a similar, or even slightly higher, price. There’s no denying that fact. But if major releases on Nintendo Switch are going to hover around 3GB file size, then you’ll be able to fit plenty of games on that SD card. Heck, even if we assume the average file size for a Nintendo Switch game is, like Super Mario Odyssey, 5GB (the third largest digital game I own in terms of file size on my Nintendo Switch, out of sixteen full digital games) then we’ll see almost 40 games fit onto a 200GB SD Card. And as we well know, AAA PS4 games are already going well above 50GB file sizes, especially when factoring in DLC and updates. A 1TB hard drive will fit less than 20 of those games if we go with the conservative estimate of 50GB per game. 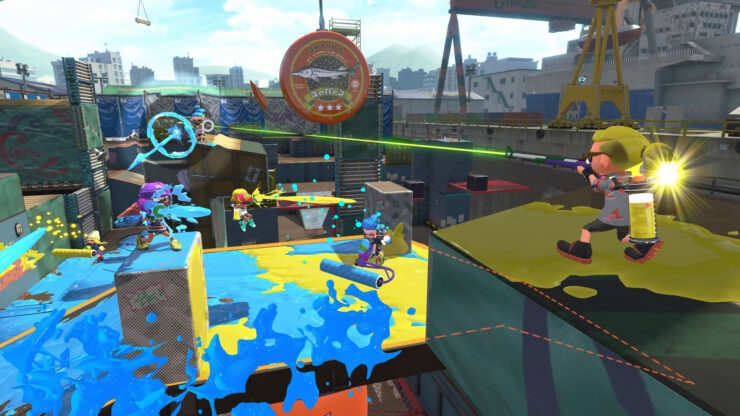 Even more pressing than the inconvenience of deleting data and moving around files is the slow redundancy of physical media, and this is the sort of thing games collectors and preservationists have been fearing for far too long. The fact is, if I buy a DOOM cartridge for my Switch, forget to open it, and then pull it out of a cupboard in, say, twenty years, long after servers for the Nintendo Switch are cut off, will I even be able to play it without the massive update data, or do I officially just have a bit of plastic that tastes awful and has some nice artwork?

Ultimately, if you’re the discerning sort of player who feels passionately about the amount of hard drive space they’ve got available, you probably already have upgraded to a larger hard drive in your console, PC or a larger SD card to increase the Nintendo Switch storage capabilities, but it’s easy to see why people are feeling fleeced. In many ways, it almost feels like the Nintendo Switch is a console not quite built for purpose, especially when you try to cram these full, modern AAA titles into a much smaller space.

The Switch storage debacle is only going to get worse. More games are going to release, and while developers could all take a page from Nintendo’s book when it comes to compressing file sizes, I wouldn’t hold my breath. Dedicated Switch fans may see themselves in a future where they’ll be filling up their SD cards while still buying most of their library physically, and that’s just defeating the point, at best, and turning good customers away at worst.