I was hardly the first to express my initial distaste at the thought of Rayman’s detestable detractors - the Rabbids - crossing into Mario’s universe and shooting people. Things didn’t get better as Rabbid Peach was shown in promotional art looking… somewhat unhinged, and plenty of doubt was cast on the game. But much of that dissolves once you play it. Mario + Rabbids Kingdom Battle might be one of Mario’s most inventive and outside-of-the-box adventures to date, and the Rabbids actually make for fun characters for Mario and his pals to share their tale with.

As the story goes, a futuristic invention is fused with a Rabbid; and he, in turn, earns the ability to fuse things around him. A Rabbid with a cannon, or a paintbrush, or with a Piranha Plant, and much more. Using futuristic technology they somehow find themselves in the Mushroom Kingdom, and the Rabbid culprit, named Spawny, is the source of the troubles. Led by BEEP-0, a sentient roomba, Mario and a couple of his new Rabbid pals set out to find Spawny and put the Mushroom Kingdom back to normal. And of course, the best method is to shoot a bunch of Rabbids.

So Mario + Rabbids takes the X-COM approach to battle - a turn-based strategy where players hide behind cover and take shots at enemies, all while laying devious traps for your enemies to fall into - and despite Mario not being the most violent of chaps, he’s more than happy to shoot down some fools in the Princess and Country.

One of the nicest things about Mario + Rabbids approach to these battles is how you can decide in which order to take moves. You don’t have to move before you fire your weapon, and firing your weapon doesn’t end your turn either. Instead, each character has an attack action, a movement action and a special action, and you’re able to use one each turn for each character or save them for later turns. You can also mix and match which characters use what abilities and when - you can move into position with Luigi, use him as a springboard for Mario to make distance, and then go back to Luigi for his attack action. This flexibility actually allows for a great deal of strategy - your understanding of how to optimise your turns for best damage and movement will change as you play, opening up a world of possibilities.

And those are just base game mechanics - things quickly become more complicated as you level your team’s Skill Trees, giving them abilities to attack multiple characters in range during your movement turn, or even unlock new special and attack actions, each of these paving the way for new possibilities. Homing explosives can be turned into waiting bombs, and luring enemies that retaliate when hit into these traps is just one of the many tactics you can abuse to do more damage during your turns. Mix in a variety of enemy types and some dangerous monsters like Chain Chomps, that’ll attack friend or foe depending on distance, and the kinds of combos you can create are huge.

Ubisoft’s take on the Mushroom Kingdom looks beautiful, too. The blocky, stylised surroundings of Mario + Rabbids are unlike the Mushroom Kingdoms we’ve seen in past Mario games, and instead gives it a distinct atmosphere and sense of presence. Textures really shine and the lighting brings the world to life - this is obviously achieved with a fairly strict camera which points at the ground and seldom lets you get a good view of the overworld. Technical issues do show through - some small frame rate drops here and there, character animations not cycling perfectly or awkwardly shunting to an idle stance before cutscenes fade out - but these technical gripes really are minor, and don’t affect the experience in any tangible way.

Perhaps the biggest shock is that the Rabbids don’t at all ruin the experience - even for a potential hater like myself. In cutscenes, they’re shockingly well humoured and bring some sass to Mario’s bland personality. Without the Rabbids, this game wouldn’t be as fun or funny, and that’s a fact. Rabbid Peach is actually a great character, and she has some hilarious moments that provided laughs I simply don’t expect from a Mario game.

The game is well-humoured, looks good, plays well - but unfortunately, I didn’t feel the attachment for long. The quick-pace of early battles soon devolves into fights that last far too long against enemies that can feel frustrating to deal with. A surprisingly high difficulty is nice but adds to the frustrations of tedium over time. Bosses help break up the pace and require more inventive solutions than just “take cover and do damage” but they are too few and far between, with too boring fights with plain old Rabbids and their larger pals to fill the gap.

Review code provided by the publisher. You can buy it on Amazon. 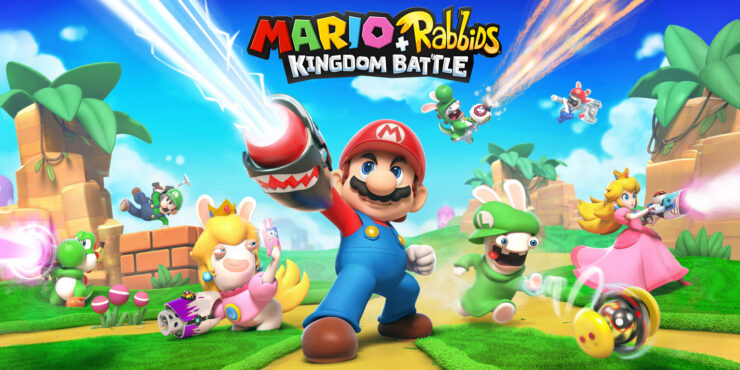 Mario + Rabbids: Kingdom Battle looks, plays and sounds better than you would've ever expected from such a confusing crossover - an interesting take on the X-COM formula that can start to feel tedious, but starts amazingly and will keep many players stuck into the turn-based strategy shooter.