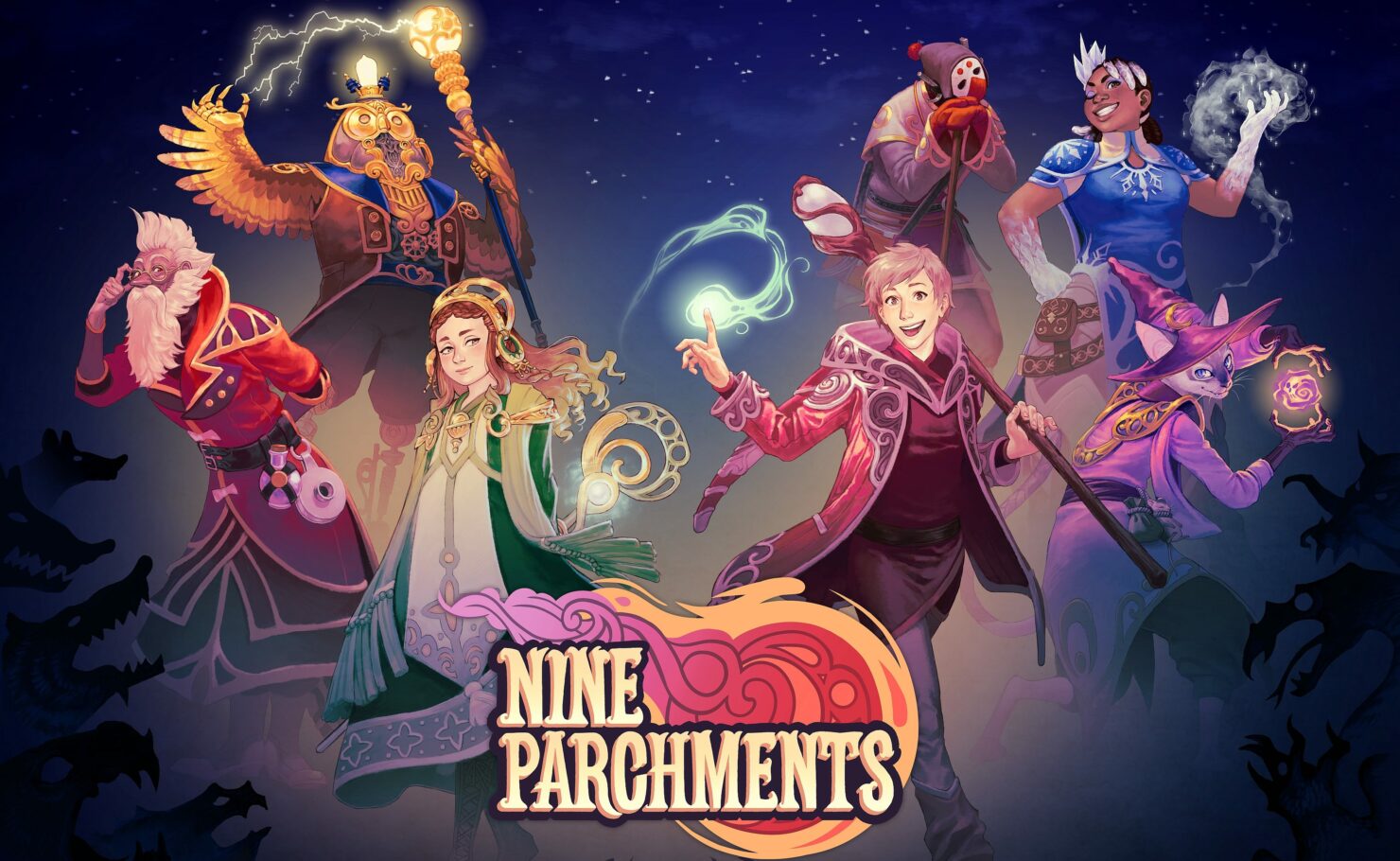 Frozenbyte, the Finnish studio widely known for the Trine games, is launching Nine Parchments today on PC (Steam) and Nintendo Switch (where you can also download a demo to give it a try), with PlayStation 4 and Xbox One releases coming soon.

The game is a cooperative blast'em up featuring runaway apprentice mages who want to expand their spellbooks by retrieving the titular lost Nine Parchments.

Since there isn't that much information available beyond this brief overview, we reached out to Frozenbyte for an interview, which you can find in its entirety below.

Was it a conscious decision on your behalf to release the game in early December, when the big releases have finally slowed down?

We were aiming initially for an Autumn release, but around Gamescom it became clear that we wanted to polish out the game a bit more, so we ended up with a release plan targeting the holidays. The end of the year has always been full of big releases, but we wanted to get the game out before Christmas. We were hoping there’d be a sweet spot in early December.

While looking at the game at first glance, it's hard not to draw comparisons with Magicka. Is there anything in particular that sets apart Nine Parchments?

The biggest difference is in the controls and movement. Nine Parchments is really easy to get into as the controls are quite simple to learn and are focused on action gameplay. The movement plays a big role in fights as you need to be jumping, blinking, aiming, shooting, and switching spells at the same time.

You said that the game will have 32 levels at launch. Are you planning to add more later and if so, will those be free or paid DLCs?

We don’t have any DLC plans yet, the game is a complete package on release! The most important factor deciding future DLC’s are of course the sales and reception, which we’ll have a better idea of after launch.

For Has-Been Heroes for example we did a free expansion quite a few months after the initial release and that has been received really well. We’ll see!

How replayable do you believe Nine Parchments will be? Did you add anything like random placement of enemies in the levels?

There’s quite a lot of replayability as the spells you get are randomized on each playthrough, you can try different skill builds, and unlock additional characters that each have their unique skill trees and different starting spells. There are 8 different playable characters, each with 4 variations that are unlocked separately.

The enemies appear in the same situations in the levels but come with some randomization and variation on each playthrough. You can also play the game in different difficulty settings.

The number of enemies is scaled depending on the number of people playing in co-op, so the more people you have the more enemies will appear!

The game can also be played with four different difficulty settings, easy, normal, hard and hardcore. As you might expect, there will be more enemies and they’ll be harder to defeat on the harder difficulties!

Are you using the same engine seen in Shadwen and Trine 3? Which technical improvements were you able to add this time around?

Yes, we are using the same engine with some minor improvements all around. Mostly they are on the usability side, so tools that make our level designers jobs more efficient, but also we’ve added Xbox One and Switch support since those days.

On PC, do you plan to make the game compatible with Mac OS and/or Linux at some point?

Right now it does not seem all that likely with the current engine that we are using. After Nine Parchments wraps up, we are updating our engine and renderer to the next generation, so a lot of big changes will be made and we are a bit short on Mac and Linux programmers at the moment.

Will Nine Parchments support HDR on platforms like PlayStation 4, Xbox One S/X and PC?

We won’t have HDR support, but Xbox One X and PC will be capable of 4K.

Can you share the technical specs of the game (graphics resolution, settings quality, etc.) running on PS4 Pro and Xbox One X, respectively? Also, are you targeting 60 frames per second on all platforms?

Here are the different specs on various platforms:

Nine Parchments is launching on the Nintendo Switch. What was your experience with the console as a developer? Did you have to make significant trade-offs in order to run the game?

We’ve been enjoying development on Switch a lot. The architecture, documentation and everything has been very well put together, Nintendo has done a great job. Nine Parchments is quite demanding visually, so we’re running at 30fps, 1080p in docked and 720p in portable mode. The Switch is definitely a powerhouse considering its size, and the portability really works well for many games. You can even play Nine Parchments in co-op on a single Switch system where each player only uses one Joy-Con!

What are the odds of seeing ports of your previous games such as Trine or Shadwen to the Switch?

I’d say the odds are in favor of the Trine games over Shadwen definitely, but it remains to be seen. They could be a good fit so we’ll see what next year brings.

When we had a chat about Shadwen, you said there was a chance of an Xbox One port. That clearly didn't happen - was that merely due to lack of opportunity?

Shadwen did not fulfill our sales expectations, and the critical reception wasn’t overly positive, so we decided to pursue other projects instead.

Finally, the inevitable question - would you like to go back to the Trine franchise eventually?

Maybe! Nine Parchments is taking place in the Trine world so perhaps that’s a sign of things to come, who knows!