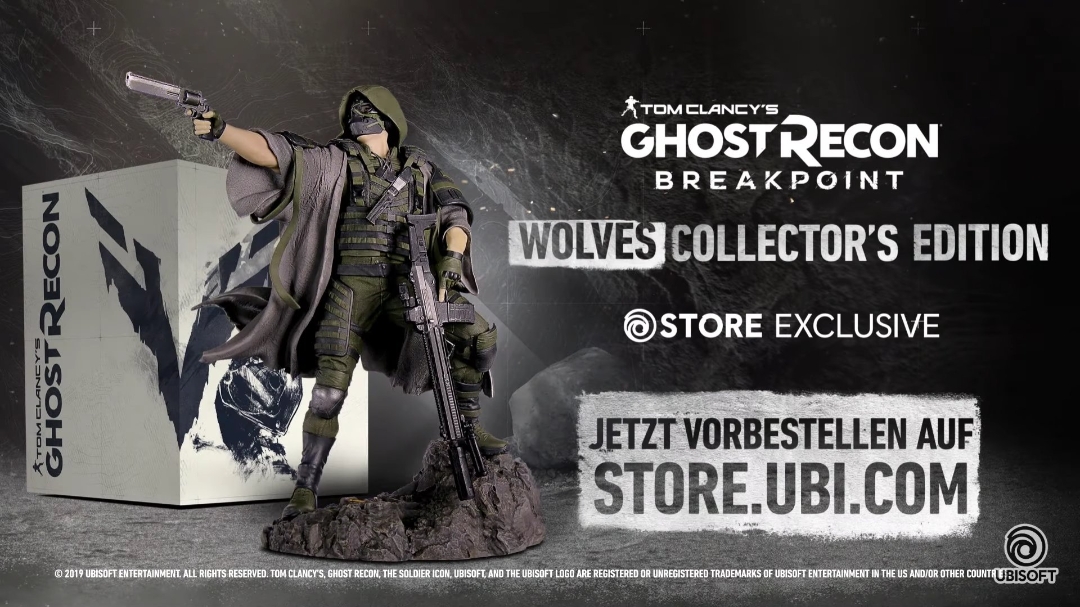 It seems the curse of Ubisoft strikes again. There never seems to be a game that Ubisoft doesn't have leaked somewhere, either on the internet or even in the stars. I've seen colanders hold liquid seemingly better than Ubisoft holds information. Still, this is always good for me, somebody who likes to know things. What is this thing? Well, the new Ghost Recon will be called Breakpoint and, and this is a huge shock, it will have at least one special edition.

Tomorrow was meant to be the world reveal of the new Ghost Recon game at 11:30 AM PT / 2:30 PM ET / 7:30 PM BS, sadly for them it seems the German side accidentally threw up an image a little too early, as caught by the quick-catching jrmywl30 over on Reddit. The Wolves collectors edition, as seen in the header image, makes it look like you'll be playing as some caped masked crusader. So, Batman. I am assuming the character is the protagonist, it could be the antagonist.

Tune into the #GhostRecon World Premiere event May 9 at 11:30 am PT.

❤️ this Tweet to watch the Official Announce Trailer on May 9! pic.twitter.com/n7emQ6M0p7

No doubt we'll find out more information tomorrow when the official world premiere comes out, but until that time we can at least see that it'll be called Breakpoint and, in traditional Ubisoft fashion, have at least one collectors edition. I'm going to hazard a guess that there will be six editions overall, from the regular digital edition to the digital deluxe, the standard retail, retail special edition and probably two more I've not thought of yet. Maybe I'm a tad cynical.

Hopefully, this will be a more linear focused title than the previous Ghost Recon Wildlands, which I reviewed back in the day. Why? Because as much as open worlds can be fun, the bland meaningless content can get too much. Here were my impressions of Wildlands:

Ghost Recon Wildlands is just another in the long line of Ubisoft's vapid open world games packed full of content (collectibles and quests) with no real meaning. The setting is absolutely stunning and a joy to view, but there's nothing in the world to actually incentivise you to travel around. It's a sturdy, but average shooter with no variety. At the end of it all, it's mostly boring interspersed with moments of fun.

Roll on tomorrow where we (may) get to see what sort of game Ghost Recon Breakpoint is going to be.