Microsoft released Windows 10 Redstone Preview build 14332 to both the Mobile and PC Insiders. While the latest preview had a focus on the desktop operating system, an upcoming build is expected to bring more new feature improvements to Windows 10 Mobile. According to a report, these enhancements include a new screenshot capture sound and some minor changes to the Action Center UI. 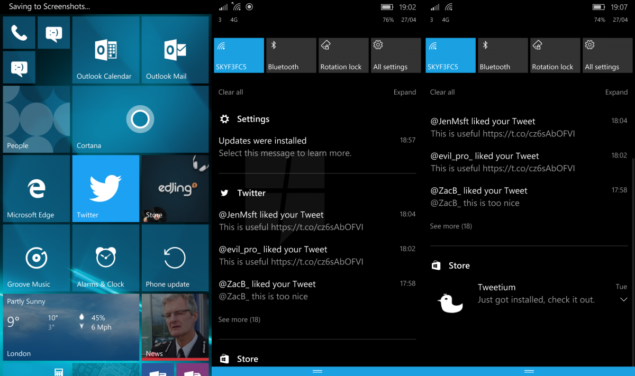 Publishing the latest Windows 10 Mobile build 14332 to Insiders on the Fast ring yesterday, the company is already testing a new build for Mobile internally. Folks at MSPU have reported that Microsoft is testing new features and UI improvements for Windows 10 Mobile Action Center. We have seen Action Center receiving much attention from the company as several previous builds coming from the Development Branch have introduced enhancements and improvements to the Action Center.

The newer features that Microsoft is testing include an improved Action Center that "no longer shows a background for the app icons on the notification headers," giving Action Center a much cleaner look. This is similar to how the Action Center looks in Windows 10 PC's latest builds.

An upcoming Redstone Preview build will not only further improve the Action Center, but will also introduce a new screenshot capture sound in the mobile OS. Microsoft has been using the same sound since Windows Phone 8.1, and is yet to introduce a new sound for Windows 10 Mobile.

Microsoft has introduced several new features to its mobile operating system in the past few weeks. An earlier Windows 10 Mobile Preview build 14327 also brought in new Messaging Experience Preview that allows you to send and receive text messages from your phone directly from your Windows 10 PC. Windows 10 Mobile 14322 was the last major build sent out to Insiders, bringing Action Center improvements, camera button on the lock screen, updated emoji, Edge improvements, and updates to the Settings app. You can read more about this build here: Windows 10 Mobile 14322 Released to the Fast Ring with Improved Action Center, Emoji and More