Sony's PlayStation 5 reveal event gave us the first look at Capcom's upcoming release of Resident Evil Village but Capcom still have a little more to share in a special developer message. While the original trailer set up the story and showed us who some of the key characters will be, Tsuyoshi Kanda and Peter Fabiano from Capcom both had some extra details to share.

Being built from the ground up for next generation consoles and PC, Resident Evil Village is already starting to showcase some of the hallmarks of what players can expect from both the PlayStation 5 and Xbox Series X. As Peter Fabiano tells us in the video below, "realistic graphics and immersive audio with no load times will really draw you into the world we've created for Resident Evil Village".

Resident Evil Village marks the return of Ethan Winters from the seventh mainline Resident Evil title and with it, a first-person perspective once more. As we had reported on a rumor ahead of the official Capcom announcement, Ethan may only be the protagonist for a majority of the game with one or two protagonists covering the rest of the story. Playing as Chris Redfield wouldn't be out of the ordinary after how well-received his DLC story was in Resident Evil VII but that's just another twist that Capcom will be saving until the final release. 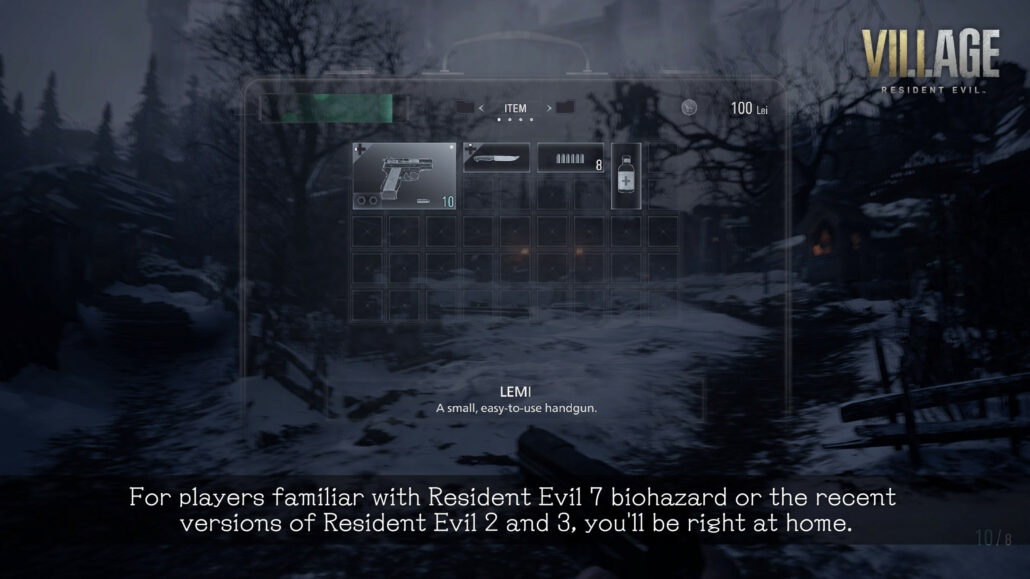 Resident Evil fans should instantly be able to notice a couple of interesting things about the inventory system shown off in the bonus video that Capcom released. First off, the inventory itself returns to the attache case design first found in Resident Evil 4, with items each taking up a certain number of spaces and perhaps being rotatable as in that title to fit in more weapons and tools. With the inventory space still leaving a lot of extra space within the briefcase, that could lead to either expandable inventory slots later on or perhaps an entirely different case with greater storage capacity being unlocked later on in Ethan's story. The other addition is the 100 Lei that Ethan is carrying, indicating a form of currency for an ingame store.

Resident Evil Village will be available on PlayStation 5, Xbox Series X and Steam on PC. While only a vague 2021 date has been confirmed for the upcoming release from Capcom, the second half of January through March has typically been the release window for most modern Resident Evil releases. Capcom will have more to share on Resident Evil Village later this year towards the end of Summer.