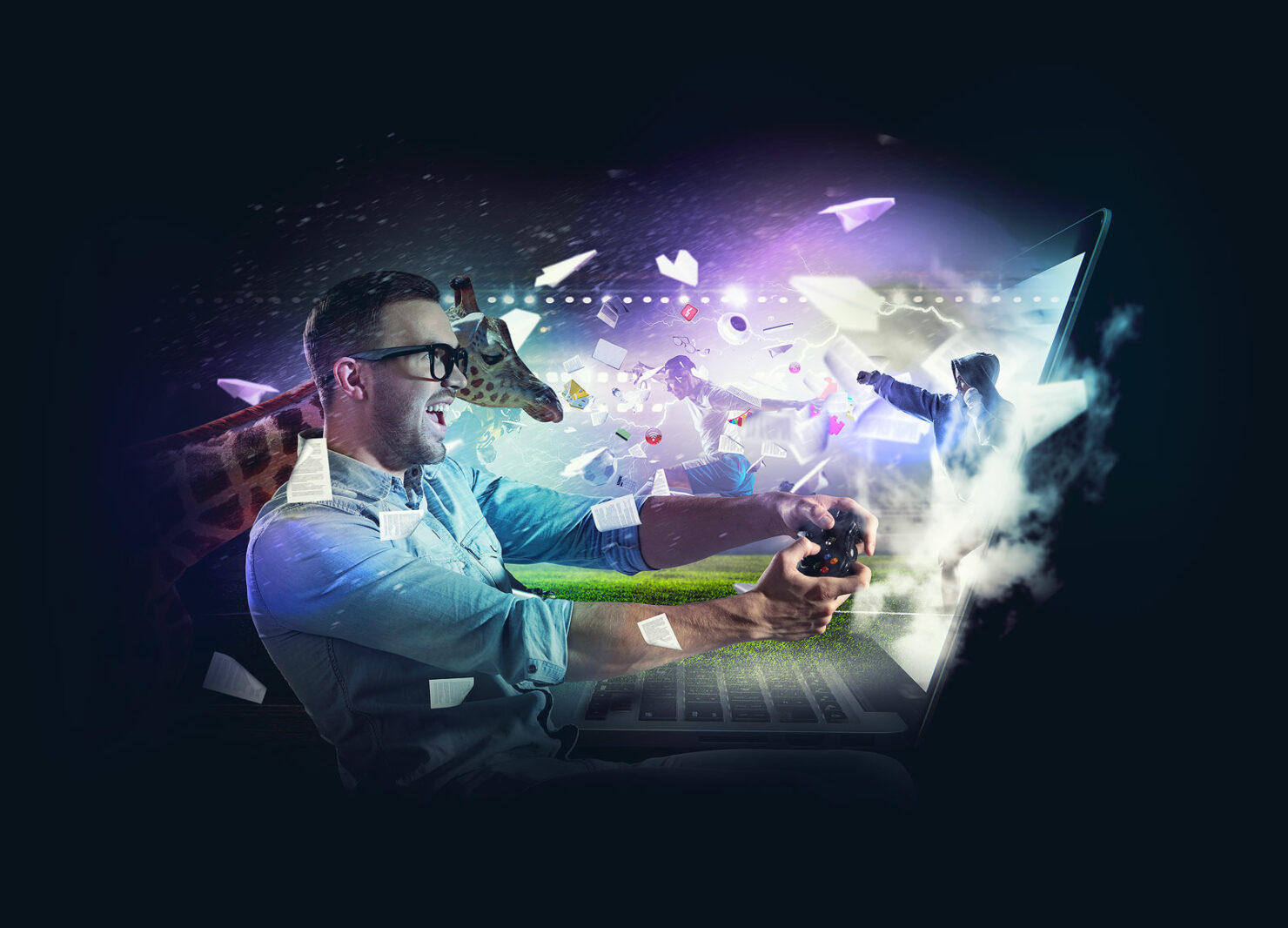 In a quiet corner of CES 2019’s La French Tech line of booths stood a vendor showcasing one of the most interesting pieces of audio tech in quite some time. While companies may offer impressive rumble tech that helps you feel the music or speakers you can only hear through bone conduction, it’s also important to continue to innovate on the technology that’s part of our daily listening experiences. Once a developer for military avionics systems, Nahimic has been working behind the scenes to create a virtual surround sound solution to the consumer market.

Nahimic has already been on the market for the past few years. Those with MSI branded motherboards might have heard some of the audio solutions through the MSI Dragon Center app, whether it’s the VoiceBoost audio mixer or various Volume Stabilizers. In 2019, Nahimic is expanding their reach on the consumer market, first with an app exclusively available to MacBook users and also with a partnership with Gigabyte for a small selection of their gaming notebook line. 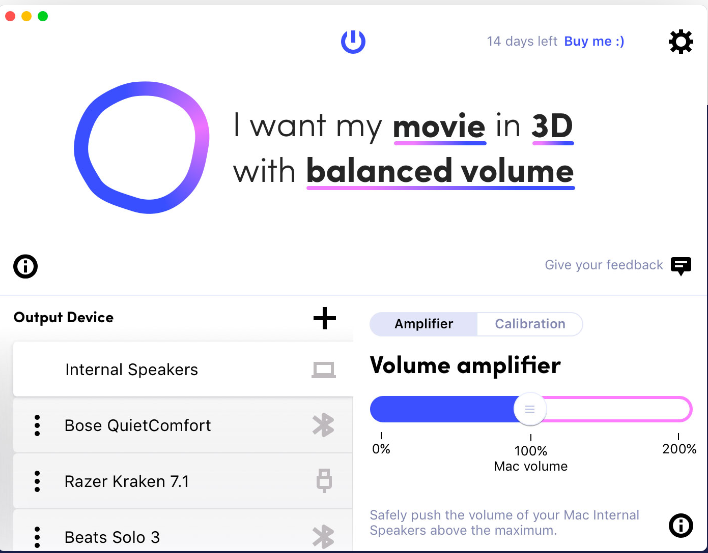 To get a feel for what Nahimic 3 offers the consumer audio market, I was given a demonstration on watching a movie trailer for Fantastic Beasts and Where to Find Them, running on an Apple MacBook with Nahimic 3 installed but only the speakers built into the laptop itself. Through a very simple UI that asked if I wanted to focus on voices or choose between 2D/3D audio, it was a very easy-to-use process that shifted over instantly. Even on the busy show floor, toggling the audio over to 3D instantly created a sense of virtual surround sound that pushed the power of the laptop speakers to throw out sound that felt like it was coming from behind me. I had to quickly turn around and check just to make sure the folks at Nahimic weren’t cheating and holding up speakers to fake that sound, but no, it really did sound that impressive on the CES show floor. 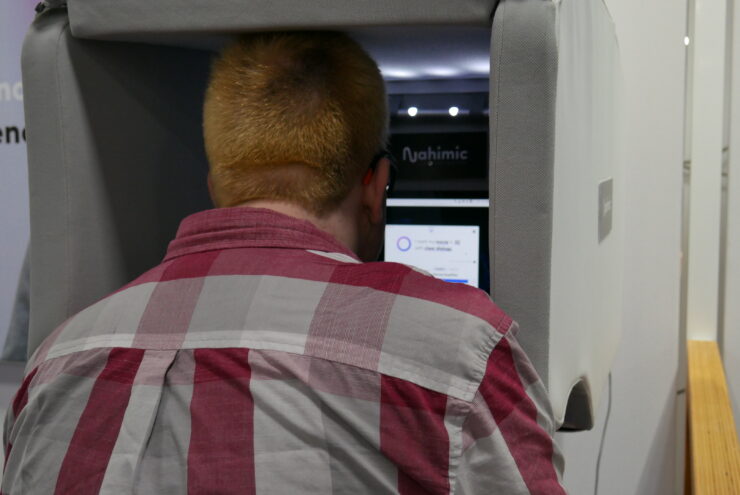 I did wish to check out Nahimic's Sound Tracker technology but it wasn't available for demonstration during my visit at CES. The prospect of having a virtual radar overlay that can pinpoint where a sound is coming from could be a game changer for the battle royale genre.

After getting an exclusive demonstration with the Nahimic app for MacBook, I visited Gigabyte to check out their upcoming models and had a brief chat with Andy Chu, the Product Marketing Manager for Gigabyte’s notebook line. 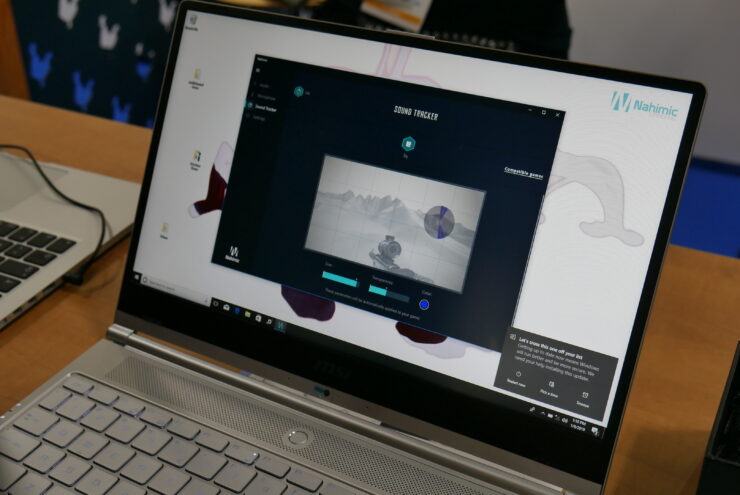 (At Gigabyte), we have the two brand new models that will work with Nahimic 3 this year: the Aero 15 and the Aorus 15. The Aero 15 is the thin and light bezel-less gaming model we’ve produced since 2017 and has won a great reputation since the launch. This year, we have enhanced it with better graphics, Microsoft AI, all-Intel Inside technology, and most importantly of all, the new Nahimic 3 audio technology. We’ve combined Nahimic 3 technology into our (Microsoft Azure) AI to automatically optimize the CPU/GPU settings according to the apps that users are running. Whenever someone plays a game, it will raise the power to the GPU higher, or when they’re running a video editing software, it will raise the power to the CPU to improve efficiency. The sound that users are hearing will be analyzed and optimized through the help of AI and Nahimic 3. Users can have a more immersive gaming experience while having a simple yet immersive movie watching experience

(Gigabyte has) another pure gaming model: The Aorus 15. All of the features inside are built for gamers, such as Nahimic 3 audio technology, a 144Hz IPS panel, RGB keyboard, GeForce RTX graphics from the 2060 to the 2070 and support for AI as well. Once gamers launch a game on (the Aorus 15), the GPU/CPU settings will be optimized and Nahimic 3 will be enabled and switched to gaming mode for an immersive experience no matter if on the panel itself or an external monitor.

Can you talk more about your partnership with Nahimic?

Before utilizing the sound technology, we struggled with finding suitable sound technology that can be used on a pure gaming model. Maybe the surround technology isn’t immersive enough or it cannot be used with other devices such as USB or external headsets. We found that Nahimic could fit this scenario perfectly because it could optimize not just the internal speaker but headsets and external speakers. 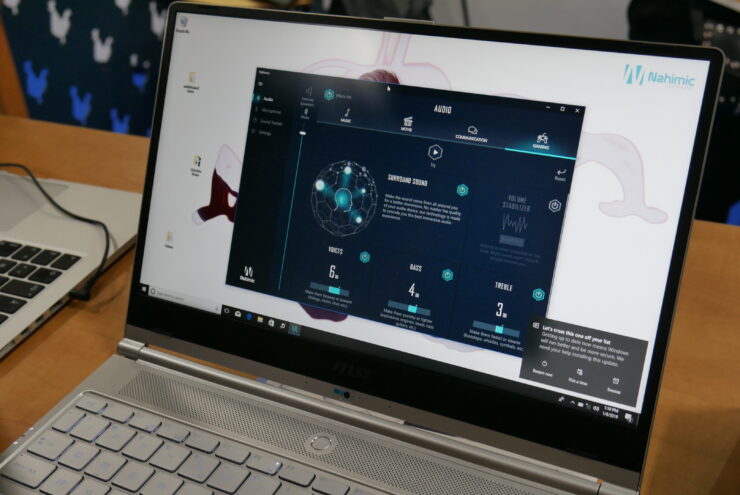 One feature that Nahimic has shown off is its visual radar (Sound Tracker visual overlay). How does that work on Gigabyte’s Aorus 15?

When you launch the control panel for Nahimic 3 in the taskbar before entering a game, you can choose to launch with Sound Tracker on. It can help you easily distinguish the locations of enemies and allies to give you more fun in the game.

What determines what will show up on the Nahimic Sound Tracker? Is it a loud enough noise, or is it isolated to a certain range of audio?

Right now, it’s the louder sound but it can show multiple sounds simultaneously. In our roadmap, it will be able to distinguish different sounds but (it is not yet available).

Does Nahimic 3 pair well with Dolby Atmos? Do the two technologies work in tandem with each other?

We’re completely independent of codecs and other audio technologies. (Nahimic 3) is on the system level, on the driver side, so we can get data and sound from any other application and render it into virtual surround sound. It works perfectly with any (software).

You’ve mentioned that Nahimic 3 will launch on those (Aero 15 and Aorus 15) laptops. Are there going to be other motherboards and products that will have Nahimic 3 support?

Right now, we are starting to focus on notebooks and I think that if it goes well, we really hope that (our partnership) will extend at Gigabyte.

Which of the two Gigabyte notebooks would you recommend a consumer?

If you want to enjoy the full gaming experience with Nahimic 3 and premium hardware and 144Hz panel, you can choose the Aorus 15 to jump in. It features a high refresh rate panel for smooth action, and most important of all, it features Nahimic 3. It provides more immersive sound when you’re playing a game such as Battlefield V. You can easily hear the sound of tanks, enemies, bombs, and jets.

Sometimes when a gamer is done playing games, they want to watch a movie. Can you talk about how Nahimic 3 will work with movies?

For movies, we have specific algorithms to extract voices in real-time so that you can always hear the dialogue and it’s very clear without needing to adjust the volume. No matter if there are explosions or people whispering, you will always hear the voices clearly.