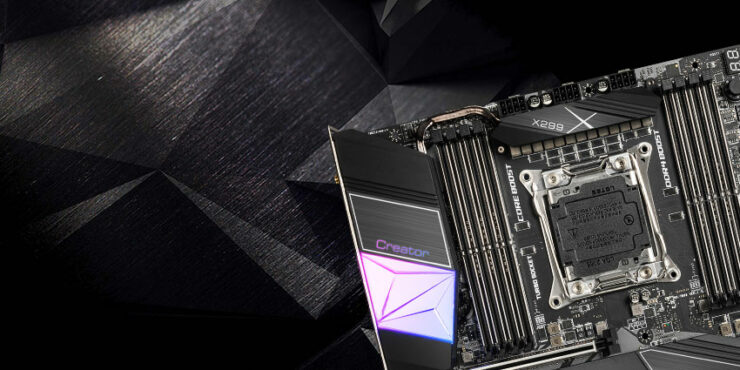 MSI seems to be focusing their marketing efforts towards creators more these days and as such, they will be launching a trio of new creator-focused motherboards based on the X299 chipset for Intel's 10th Gen X-series processors which make an official debut this month.

MSI has launched a lot of diverse products in the past few months, from their Radeon RX 5700 XT EVOKE graphics card to the more recent MEG X570 Unify motherboard. The three X299 boards all have one thing in common, they are aimed at the professional and creator market. Let's start with the top-end Creator X299 motherboard.

The MSI Creator X299 motherboard features a unique all-black color scheme with Mystic RGB that illuminates through the diamond cut-outs over the PCH and I/O heatsink. The motherboard uses a 12 phase IR Digital VRM which 90A power stages and the LGA 2066 socket is fed power by not one but three 8-pin connectors. The VRMs are cooled by an aluminum heatsink which comes with heat pipe cooling that extends all the way into the heatsink next to the I/O. There are eight DDR4 DIMM slots that can support 256 GB of memory in quad-channel mode at speeds of up to 4266 MHz OC+.

For expansion, the motherboard offers four PCIe 3.0 x16 slots & triple M.2 slots which are covered by the M.2 Shield Frozr heatsink. All four PCIe 3.0 x16 slots feature metal bracing for durability and the same goes for the DDR4 slots. Storage includes eight SATA III ports along with two front-panel USB 3.2 headers and a USB 3.2 front panel connector. There's also a U.2 port below the SATA ports which can be used for connecting U.2 SSDs. The PCH is covered by a large aluminum heatsink that comes with Mystic Light RGB as mentioned earlier.

As for the I/O ports, the motherboard houses a ton of them which include one USB 3.2 Gen 2, 7 USB 3.2 Gen 1, 2 USB 2.0 ports, a 7.1 channel HD Audio jack powered by Realtek ALC1220 Codec (Nachimic), a 10G Ethernet LAN port (Aquantia AQC107), a 1G Ethernet LAN port (Intel I219V), PS/2 port, two antenna slots, a Clear CMOS button and  Flash BIOS button. The motherboard package will include the M.2 Xpander-Aero Add-in-card which offers four extra M.2 slots which are cooled by the Aero cooler which is the same one that MSI uses on their graphics cards and also the PCIe x1 Thunderbolt M3 AIC which allows transfer speeds of up to 40 Gbps. Considering the specs of this board, it should cost around $500 US or even more when it launches.

Moving on to the MSI X299 PRO lineup, the series comes in both 10G and non-10G flavors. Both boards feature an 8 Phase VRMs which are cooled by a large aluminum heatsink that comes with heat pipe cooling. The CPU socket is powered by dual 8-pin connectors and you can see the eight DDR4 DIMM slots next to the CPU socket. The motherboards support up to 256 GB of capacity at speeds of up to 4200 MHz (OC+). 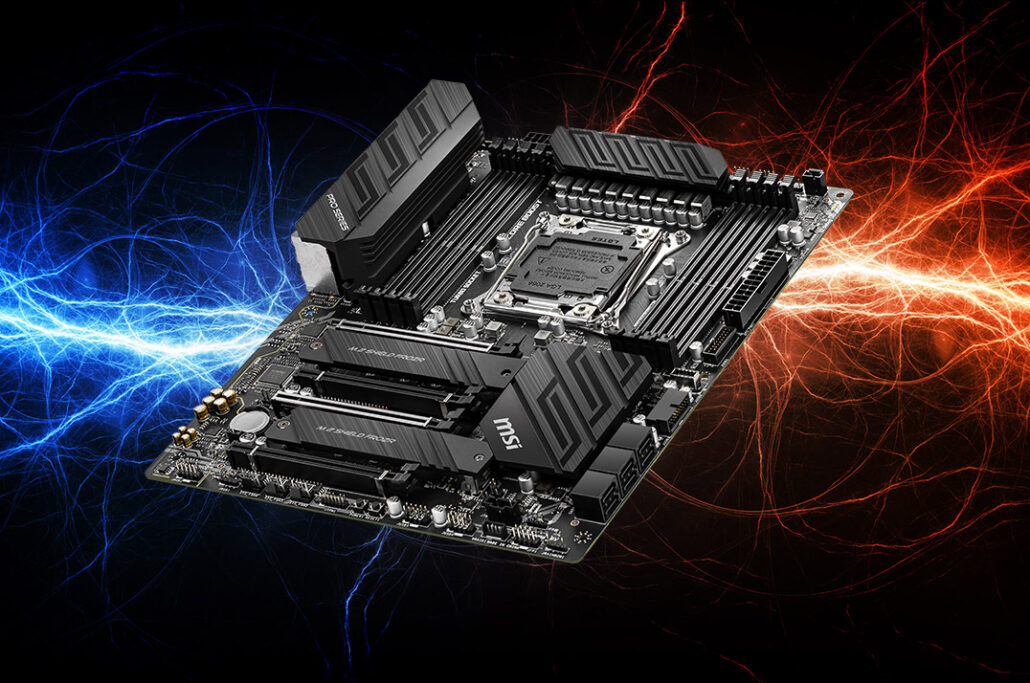 The I/O on both motherboards include 1 USB 3.2 Gen2 port, 4 USB 3.2 Gen1 ports and 4 USB 2.0 ports. There's also a 7.1 channel HD Audio jack powered by Realtek ALC1220 Codec a BIOS flash-back button and a PS/2 port. The difference with both motherboards is that they both feature 2 Ethernet LAN ports, a 2.5G port powered by the Realtek RTL8125-CG controller and a 1G Ethernet LAN port powered by the Intel I219-V controller.

The 10G model comes with an add-in-card which is powered by the Aquantia AQC107 controller. Both motherboards feature an I/O cover but don't get a pre-installed I/O shield like the Creator X299. They do however get an M.2 Xpander-Z which offers two M.2 ports that get active cooling from the fan on the AIC shroud. Expect the boards to hit pricing around $250-$300 US with the 10G model going for a bit extra.