Something extraordinary is happening in the PC industry: long-time market leader Intel (NASDAQ:INTC) has finally reacted to the threat that AMD's (NASDAQ:AMD) Zen-based CPUs present and slashed prices of its upcoming HEDT SKUs by almost half (44.6% to be exact). This information was revealed in a leak by the highly credible Videocardz and something we covered in detail earlier today. Intel's stock was trading at $50.81 after hours at the time of writing and was trending slightly upwards.

Things are about to get heated in the x86 PC industry as Intel and AMD faceoff in one of the largest price (and performance) escalations of recent times. Just a few years ago, the market was mostly stagnant, mainstream cores were capped at 4 per SKU (6 for HEDT) and almost no serious enthusiast bought AMD processors. Then came Ryzen. We predicted the end was nigh for Intel's pricing strategy in our article titled "AMD Calls Check, Your Move Intel" published in early 2017 just before Ryzen's launch. Fast forward two years and we have a turbulent market with mainstream cores at 8 and HEDT hitting 18. It also looks like Intel has finally made its move.

It is still slightly more expensive than AMD parts but an "Intel premium" of $2 is certainly a lot more palatable than $48! 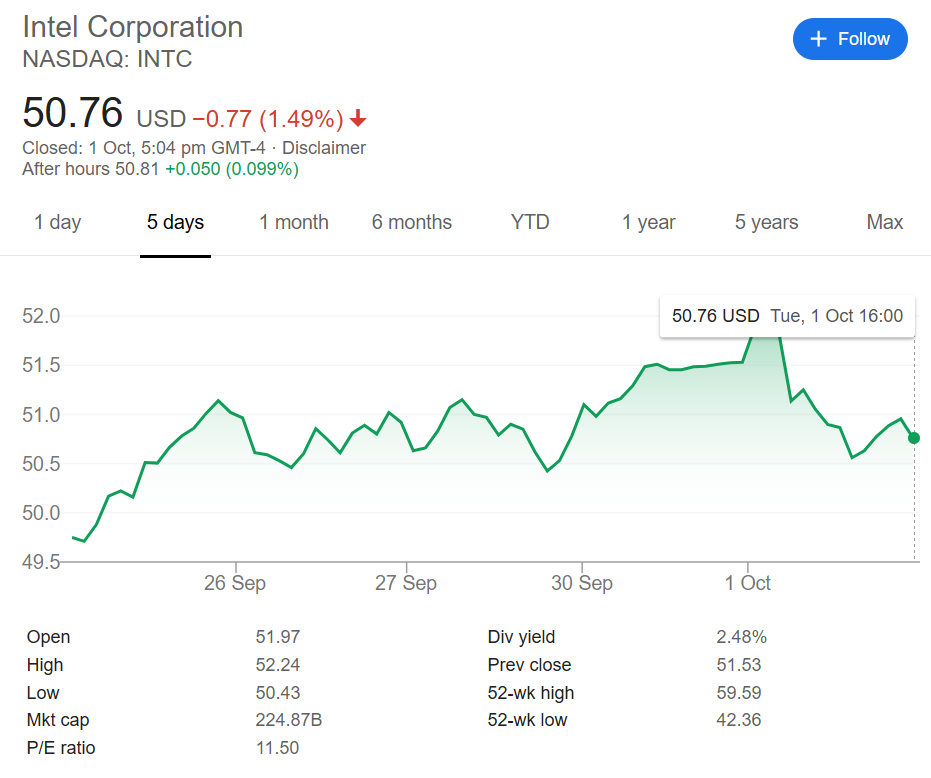 That's not all. Intel will actually be doubling the amount of supported memory (from 128 GB on 9th Gen Intel HEDT and AMD 2nd Gen Threadripper) to 256GB, as well as increasing the stock memory controller clock to 2933 MHz to match AMD (this was previously 2666 on Intel). Available PCIe lanes have also been increased from 68 to 72 (as opposed to AMD's 64) on the upcoming platform. These additions more than justify the slight price per core premium of $2 and actually make this a sweeter deal everything considered considering Intel processors still have an IPC (and max clock speed) lead over AMD.

Here's the thing though, this pricing might not trickle down to the consumer. We believe Intel might face some resistance and/or push back from retailers and partners. If you are a business selling Intel's old 18-core for $1979, you aren't going to want to stock the upcoming 10th generation CPUs at a price that completely undercuts your existing stock. No matter how you slice it, the channel is going to have to take some heavy losses on SKUs that, overnight, just got their valuations cut in half.

There are two ways Intel can do this. It can either let the free market take its course (and expect significant resistance in these price cuts trickling down to the consumer) or it can subsidize these losses and make channel partners adopt this new pricing on an urgent basis. For the big/known retailers, I believe you are going to see this happen although it's unlikely smaller retailers/etailers adopt this new pricing from the get-go.

Needless to say, this new pricing strategy is going to eat into Intel's margins but considering how uncompetitive their older HEDT rank and file was, we don't believe you are going to see much of a revenue loss. If anything, we are likely going to see a sharp uptick in HEDT volume shipped (translating to a net gain in revenue) if they manage to get this pricing down to the grassroots. It might have taken them 2.5+ years to get to this point - but Intel has finally conceded that AMD is competition and has come out guns blazing.