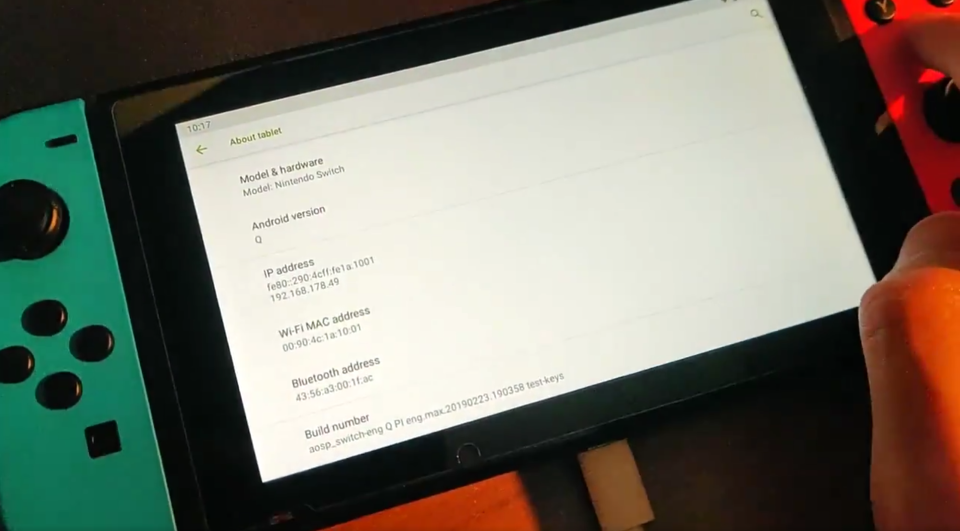 It appears that two modders have managed to get Android up and running on the Nintendo Switch.

Truth be told – not all functions are working properly, but developers Max Keller and Billy Laws have succeeded in getting the system running on Nintendo’s hybrid platform. The OS is still running laggy due to the GPU drivers not working properly. Instead, the modders are using CPU-based graphics, but a fix for that issue is said to be underway as we speak.

Taking to Twitter, Keller writes that both WiFi and Bluetooth are working properly on the Switch.

“This is not a separate effort, shout out to ByLaws for the majority of the work”, Keller writes. “Currently running laggy cause GPU drivers are not yet working as they should so we are using CPU based graphics. Work to fix that is underway 🙂 WiFi, Bluetooth work fine as you can see.”

Audio isn’t active yet, but Keller adds that Bluetooth Audio should be doable pretty soon.

“Addressing some questions about Switch Android: Audio does not work yet, but BT audio should be doable soon, USB doesn't work yet. The screen has a funky color scheme currently which should be fixed with real GPU drivers. Joy Cons work but need tweaking.”
Based on the video that Keller posted on Twitter, the Switch’s touchscreen and joy-con’s buttons work.

Nintendo Flirted With Cyanogen For The Nintendo Switch OS; Executive Told Them To “Stick It”

To our knowledge, this is the first time that Android is seen up and running succesfully on the Nintendo Switch since its launch back in March of 2017. The Android version used is the upcoming Android Q version that was leaked by XDA-developers last month.

Getting Android working on the Switch will allow for various new options on Nintendo’s hybrid platform, including the use of Android applications. We’ll update as soon as we learn more about this matter.