Siri Siri Siri! The recurring word on every magazine, blog and mouths of all tech enthusiasts since October has been gaining a lot of fame since then. Everyone is sublimed by the emerging voice recognition feature in the latest iPhone 4S. It has truly wrecked the ego of Android and Windows Phone owners. Microsoft and Google have already said that it’s nothing new and has been here for a long time and say that it’s just revamped speech recognition and nothing special. To whom should one believe; Microsoft, Google or Apple? Microsoft has claimed that it’s TellMe voice recognition is at par with Siri and now it’s time for you to witness and decide which one’s better. 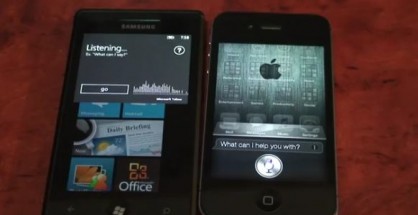 Microsoft’s TellMe is a speech recognition system in their latest Mango OS but is it really that magical as Siri is? TechAU compared the two with a Samsung Windows Phone 7 and iPhone 4S. See the video below for the outcome.

How did each device respond? Here’s the summary:

Original: "Send text to Simone."
Tellme: Searching for "stain detector simo"...
Siri: OK, I can send a text to Simone Arnold for you... What would you like it to say?

Microsoft’s claim that voice recognition existed in their devices long before Siri can truly be accepted but the fact that TellMe is better than Siri is hard to digest. Both features are currently in more of a beta stage and still need a lot of improvement but at the end of the day Siri is truly auspicious and incomparable at the moment.