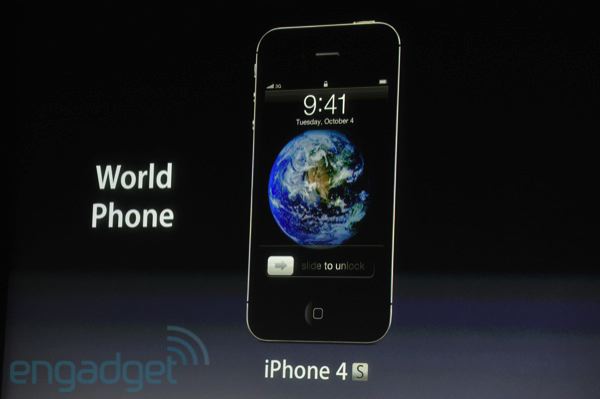 The wait is finally over folks! Apple has finally announced the new iPhone at today's Media event. Previously it was rumored that we will be getting two new iPhones, however it seems the upcoming phone, is just the iPhone 4S which is an upgraded version of the iPhone 4 with similar design but new specs. As rumored the device has Apple's dual core A5 chip, an 8MP camera and the same 3.5" Retina display we all know. However there is much more in the details than that.

Firstly, the death grip issue has been resolved thanks two a new system of two antennas that can be switched between automatically so calls are not dropped when holding the phone.

Then we have the A5 chip and the new camera. The A5 chip we have already seen in the iPad 2, the camera is a new 8MP f/2.4 affair with a backlight CMOS sensor for better snaps in low light conditions. A new image signal processor brings better imagge stabilization aswell face detection the device, and you can also record video in 1080p. You can now double tap the home button which opens up the camera app and you can take a photo straight away.

As for as networking goes, 4G LTE is not coming in the new iPhone 4S however you do get a bump in speed from 7.2MBPPS to 14.4MBPS (theoretical bandwidth). The battery life is great compared to Android with 8 hours of of talk time over 3G, 14 hours of 2G, 6 hours of browsing on 3G, 10 hours of video playback or 40hours of music playback. Safe to say Apple has managed the battery life department very well even though the device has got more power hungry hardware this time.

Hardware check over, lets get to the software side of things. Firstly we have iOS 5 coming with the iPhone 4S (also available for other iDevices ofcourse) which also has the built in iMessage app that lets you message fellow iOS5 users at a lower cost (or free if over Wifi). The service is integrated into the "Messages" app and automatically identifies if your contact has an iOS5 device and uses iMessage instead.

Then we have Siri, your own personal assistant with the iPhone 4s. We are no strangers to voice input, but so far it has only proven to be a gimmick for most smartphones. Siri though is different, it works as demonstrated LIVE on the Media event and you can talk to it like you would to a person, and ask it the weather forecast, the time, to make an appointment or read out a text message you just received. Siri does it all.

Now down to the real stuff. Price. The device will cost $199/$299/$399 for the 16,32 and 64GB versions with two year contracts. Like the iPhone 4, it will be coming in both black and white AT launch which is October 14th, pre orders start October 7th. As mentioned sometime earlier, Sprint in the US will be carrying the iPhone 4S aswell as all future iPhones.