Microsoft has finally confirmed that it's killing Project Astoria - one of the 4 app Bridges that were announced last year, helping developers to easily port Android apps to Windows 10 Mobile. The company will instead focus on Project Islandwood and other Bridges.

- How to Install Your Favorite Android Apps on Windows 10 Mobile 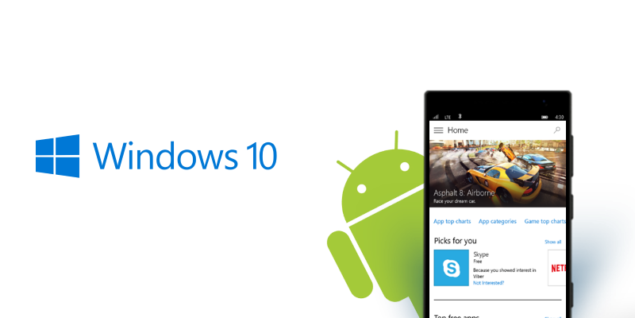 Project Astoria is no more:

After months of seeing no progress on Project Astoria, Microsoft has officially confirmed its plans to offer developers improved bridge tools. The company has shared today that it is ending Project Astoria as the feedback received from the community reveals that the tool is confusing developers with the choice of porting their apps from multiple platforms. Project Islandwood (tool to port iOS apps) will continue to be the focused and single Bridge option for helping developers easily port their iOS apps to the Windows 10 platform.

We received a lot of feedback that having two Bridge technologies to bring code from mobile operating systems to Windows was unnecessary, and the choice between them could be confusing. We have carefully considered this feedback and decided that we would focus our efforts on the Windows Bridge for iOS and make it the single Bridge option for bringing mobile code to all Windows 10 devices, including Xbox and PCs. For those developers who spent time investigating the Android Bridge, we strongly encourage you to take a look at the iOS Bridge and Xamarin as great solutions.

Project Islandwood and Astoria were announced at the 2015 Build Developer Conference. While we have seen Project Islandwood getting the focus and the news time from Microsoft, Astoria was largely ignored for the last few months. As the above excerpt reveals Microsoft is now focusing on Islandwood and Xamarin. Xamarin is the latest acquisition of the tech giant, and helps developers “use a large percentage of their C# code to deliver a fully native mobile app experience for iOS and Android.” The company has created tools for making mobile apps for iOS, Android and Windows that share common code, enabling quick release to all the three platforms. This essentially means that the Xamarin will enable developers to resuse even more code across the platforms, saving them time and effort.

The updated Windows 10 Bridges that will be discussed and detailed further at the Build this year: