Microsoft has already conquered the world with its blazing Windows 7 which recently outclassed Windows XP to become the most widely used OS. But everyone’s asking for more and in turn Microsoft has already announced Windows 8 that will be available sometime in 2012. In order to keep the world ecstatic Microsoft reveals the improvements and UI of Windows 8 and today it has detailed the revamped Task Manager of Windows 8 which has been bestowed with a completely new look and format. 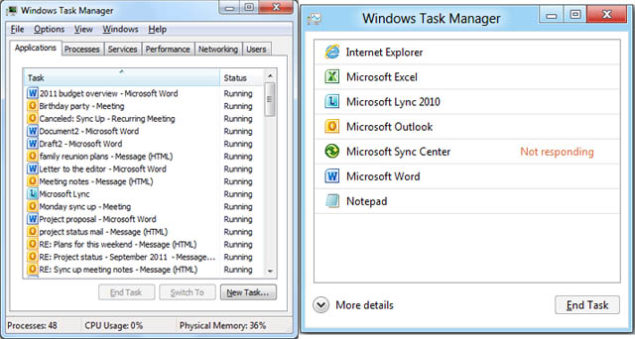 Microsoft took into consideration the regular use of the task manager by the public and realized that most of the people accessed the ‘processes’ tab to simply kill or end the process. Why do people access the processes tab? Well Microsoft got their answer from the survey that the details in the application tab weren’t sufficient so the new task messenger will focus on some key factors according to Microsoft:

The new task messenger has been bestowed with a completely new design, style and interface. The listing of processes has been more organized into groups of several categories. It will also feature a detailed CPU, memory, network and disk usage for each application. It will also offer a detailed as well as a default view (which is shown above). The detailed view is shown in the image below. Also there will be a search option for each process that will let you know the function of each process. 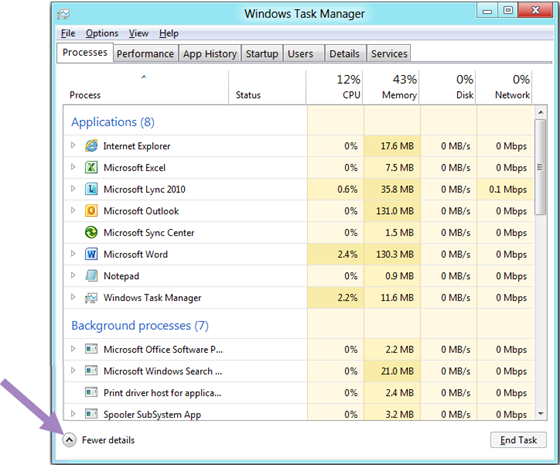 Well Windows 8 seems really interesting with its enthralling Metro UI and now a task manager that was a long lived dream. Stay tuned for further updates from Windows 8.