The infamous Blue Screen of Death on Windows not only annoys you because no one likes to see their PC crashing, but even more so when it shows you cryptic reasons behind that crash. In order to make these screens that are shown in the hour of despair a little more friendly, Microsoft has internally started testing the addition of QR codes in Windows 10 BSOD.

- How to Download and Run “Bash on Ubuntu on Windows 10” 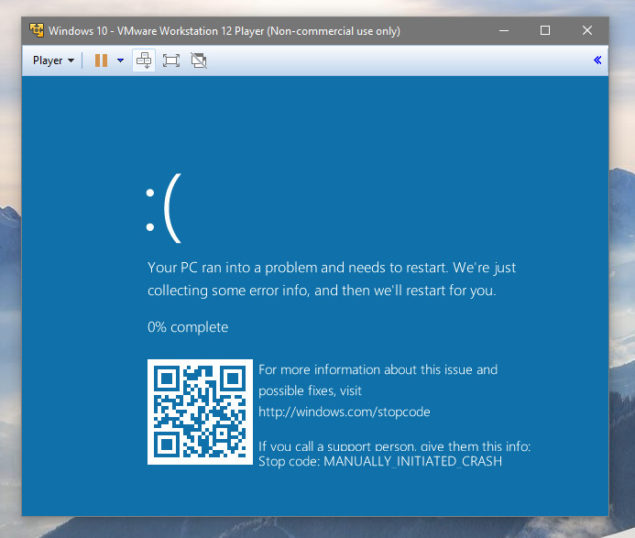 In the future, when you see the dreaded blue screen while using Windows 10, you might also see a QR code potentially carrying more information about the error. The latest Windows 10 Insider Preview build 14316 includes a QR code that could offer more information about the error. This QR code currently takes the user to the windows.com/stopcode website, which helps users with some common BSOD causes. The QR code is added to the blue screen to offer users a better and fast-track solution to get the support using a secondary device, like a smartphone or a tablet reading the code for more information.

Currently, when your PC crashes and you see this blue screen, errors are often presented in a technical language, without any fix or solution offered. When presented with, for example, a "KERNEL_DATA_INPAGE_ERROR," users try to type the same error description on a different device to find out a solution which leads to an endless list of Google Search results, often giving inconsistent information and fixes for the error.

Even with QR codes, there is a very small window of time when a user can capture this QR code, as most PCs automatically reboot after a Blue Screen. However, the feature is still in development and could be made to offer more help, combined in a BSOD alert. In the future, Microsoft could take users directly to specific resources using these QR codes to help them quickly troubleshoot the issues that may have caused their Windows 10 PC to crash.

There is no information if Microsoft plans to offer this new feature to all the Windows 10 users, but it does appear to make finding and fixing a Windows 10 error a much faster process for the non-technical folks.

How to Disable Ads in Windows 10 Start Menu