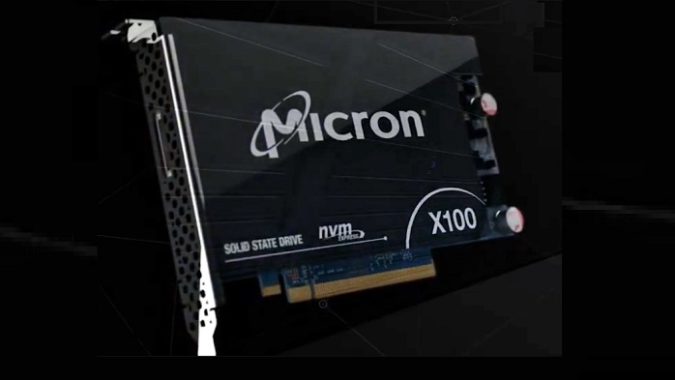 Micron Technology Inc. (NASDAQ:MU) signaled an imminent exit from the broad cyclical downturn in 2019 as it announced its earnings on Wednesday for the first fiscal quarter of 2020. The memory chipmaker provided solid guidance largely on the back of securing a license from the U.S. government for resumption of supplies to the blacklisted Chinese tech giant Huawei.

"Micron posted solid first quarter results, delivering good profitability and positive free cash flow. With our strong execution and improving industry conditions, we are optimistic that Micron's fiscal second quarter will be the cyclical bottom for our financial performance."

For the three months that ended on the 28th of November 2019, Micron reported revenue of $5.14 billion, thereby, exceeding the expectations by $100 million. This metric marks an increase of 6 percent when compared with the revenue of $4.87 billion in the fourth quarter of 2019. However, the latest revenue metric constitutes a plunge by a massive 35 percent relative to the $7.91 billion that the company earned in the comparable quarter last year.

Micron earned a Non-GAAP net income of $548 million, thereby, constituting a 13.97 percent decrease relative to the net income of $637 million that the company earned in its previous quarter. Also, its Q1 2020 gross margin was 27.3 percent compared to the expectations of 26.8 percent. The company’s Q1 2020 Non-GAAP diluted EPS was $0.48, thereby, beating expectations by $0.01.

The memory chipmaker reported $2.01 billion as cash from operations while its operating expenses totaled $811 million during the applicable quarter. 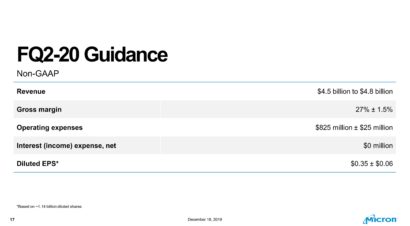 Micron announced on Wednesday its expectations for a recovery in the current fiscal year following a “cyclical bottom” in the second quarter of 2020. The CEO Mr. Mehrotra said:

“Recent trends in our business give us optimism that our fiscal second quarter will mark the bottom for our financial performance ... with continued recovery in the second half of calendar 2020.”

In a significant development, the company announced that it has secured a license for resuming its sales to one of its main customers – the blacklisted Chinese giant Huawei. As a refresher, the Trump administration had placed Huawei in the ‘Entities List’ in May 2019. This action necessitates a prior approval from the administration before American companies can transact with the resident entities on the list. According to the company, the procured licenses allow it to provide support for certain products and qualify new products for Huawei’s mobile and server businesses. Nonetheless, due to the latencies involved in ensuring that Micron’s products work seamlessly with Huawei’s latest cellphone offerings, the company does not expect this resumption of its business ties with Huawei to have a material impact on its financials for the next few quarters.

As part of the company’s guidance, Micron executives also highlighted increasing demand from cloud-computing providers along with an eventual boost from the 5G network rollout, which incidentally necessitates more memory per device.

The company’s share price jumped nearly 4 percent in the extended trading hours of Wednesday. As of 07:33 a.m. ET on Thursday, Micron’s share price is hovering at $53.04 in the pre-market trading with a market cap of around $58.51 billion. Year-to-date, the memory chipmaker’s stock has risen by a whopping 67.16 percent while the S&P500 has risen by 27.30 percent in the same period.