Metro Redux Switch has recently been rated by The Pan European Game Information (PEGI) board, suggesting that a release is imminent.

Released in 2014 for PC, PlayStation 4 and Xbox One, Metro Redux includes the definitive versions of Metro 2033 and Metro Last Light. Based on this new rating, this amazing double game collection is likely to be released on Nintendo's hybrid platform.

“All the enhancements from the acclaimed sequel ‘Metro: Last Light’ have been transferred to Metro 2033 Redux – superior AI, controls, animation, weapon handling and many more”, the game’s description reads on the website of publisher Deep Silver. “And both campaigns benefit from all-new melee animations, the ability to check your watch and ammo supplies on the fly, and new full-body player animations.” 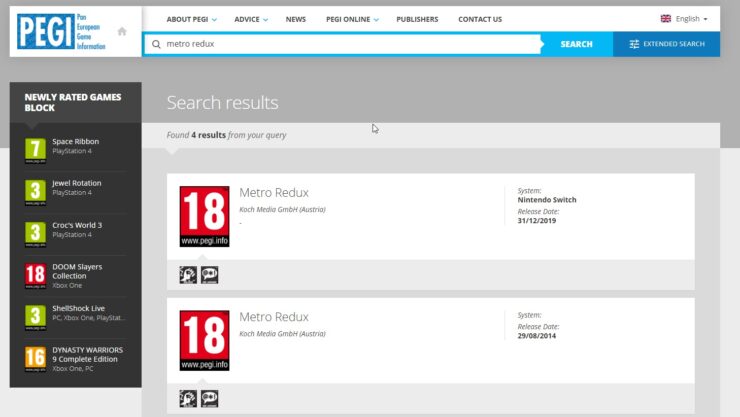 Back in October of this year, we already reported that Metro Redux Switch had been listed by a Portuguese retailer. This listing was later removed.

As neither Nintendo nor Deep Silver has officially confirmed the double game collection for the Switch, take the information above with a grain of salt for now. However, with Redux now been officially rated, it’s likely that a Switch release is imminent.