MediaTek became the first ever mobile chipset manufacturer to announce a deca-core processor inside its Helio X20 SoC, which is also known as MT6797 and in the act, would challenge Exynos 7420’s and Snapdragon 810’s supremacy. Now, the company has just announced a mid-performing chipset called Helio P10. There are a plethora of differences that can be spotted from a mile away when Helio X20 and Helio P10 are pitted together. First things first, where Helio X20 features a 10 core processor, out of which two of them belong to Cortex-A72, Helio P10 runs an octa-core processor, with all 8 cores belonging to Cortex-A53. 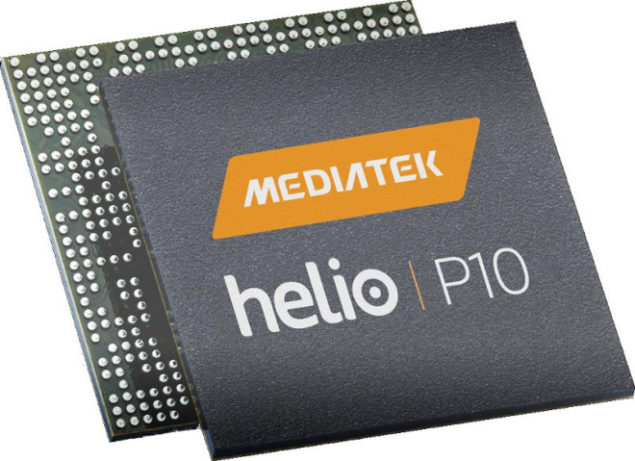 According to Engadget, the 8 Cortex-A53 cores running in Helio P10 will have a clock speed of 2 GHz. Earlier, Huawei spilled the beans as to why the company did not incorporate Cortex-A57 in its MediaPad X2 slate. Due to the processor’s overheating properties and high battery consumption, MediaTek followed in the same footsteps as Huawei and increased the clock speed of Cortex-A53 in order to deliver performance and efficiency in a nice ‘system on a chip’ package.

Additionally, the SoC also features a Mali-T860 GPU running at a frequency of 700 MHz. Just to jog your memory, the mobile graphics processor will also be present in Huawei’s upcoming mobile chipset, Kirin 940. One primary difference between Helio P10 and Helio X20 is that they are manufactured on the 28 and 20 nm process, respectively. Since Helio P10 is manufactured on a lower lithographic process as compared to Helio X20, the production cost will go very easy on MediaTek’s wallet.

This lowered production cost element will no doubt prompt several Chinese smartphone manufacturers to form a coalition with the Taiwanese firm, since a lower production cost will equal to an even affordable smartphone price tag, which is something that the mid-ranged smartphone market will grow in to. Additional features of the SoC have been detailed below:

As for when we can see Helio P10 in action, it is expected that the first handsets sporting the chipset will appear after Q3, 2015. For now, we can say that MediaTek has started to possess a firmer grip in the mid-tier chipset market.