MediaTek’s Helio X20 Features A 10-Core Processor That Will Be Able To Get A 70,000+ Score In AnTuTu

Previously, it was stated that MediaTek’s Helio lineup of SoCs would deliver performance that would challenge the supremacy of Samsung’s and Qualcomm’s chipsets. While several critics would believe that MediaTek would be considered a fool to take on the big guns of the mobile chipset industry, the Taiwanese semiconductor company might actually be able to pull this off thanks to its Helio X20. Helio X20 is the company’s upcoming chipset that will possess a 10-core processor. While we cannot detail the clock frequency of each core, what we can tell you is that the company will be aiming to obtain a 70,000+ score in AnTuTu’s mobile benchmarking application with this SoC. Samsung and Qualcomm, watch your backs. 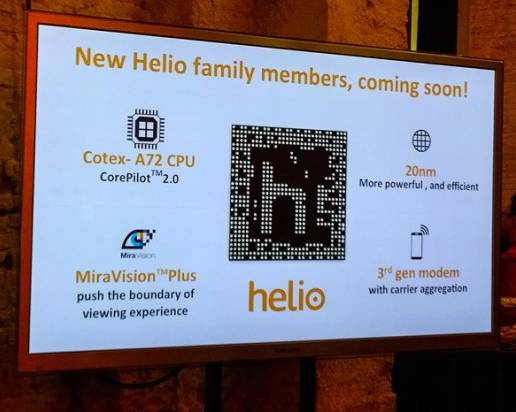 With Helio X20, More And More Handsets Will Become Fast And Affordable

When people hear of the name MediaTek, it is automatically assumed that the company’s chipsets are incorporated in to mobile devices that carry a cost-effective price tag but sacrifice performance and other features. The Helio lineup intends to change all that because the tech firm has already started showcasing Helio X20’s prowess to smartphone partners such as Xiaomi, ZTE and Vivo. With the boasted performance of the upcoming SoC, MediaTek plans to overtake Samsung’s Exynos 7420 and Qualcomm’s Snapdragon 820.

Currently, MediaTek’s MT6752 is present in devices like Lenovo K3 Note (which costs $145) and Elephone P7000 (costs $239.99) and is able to zip past the Snapdragon 801 (present in devices such as the $299 OnePlus One, Galaxy S5 and One M8). Additionally, MT6795 has been able to obtain a 50,000+ score in AnTuTu, which is an impressive feat indeed. However, before we start rooting for MediaTek immediately, let us not forget Samsung’s custom cores and Qualcomm’s Snapdragon 820.

What will be on MediaTek’s side are rising Chinese smartphone firms like Xiaomi, ZTE and several others, along with reduced pricing of mobile devices. Since Samsung is not going to incorporate its custom cores in anything that does not bear the ‘Samsung’ logo, and Snapdragon 820 is fitted in to mobile devices that carry an expensive price tag, MediaTek has a lot going for it. We are just going to have to wait and see the true performance of Helio X20 when mass production commences by the end of 2015.

What this means is that you will not be able to witness the first mobile devices sporting the company’s Helio X20 until 2016. Regardless, it is still worth the wait right?