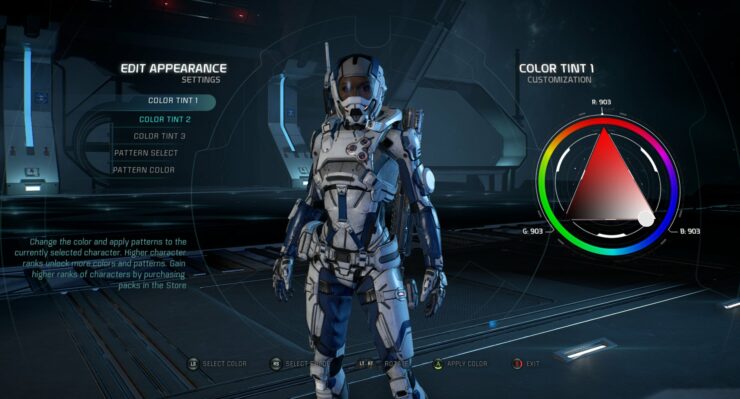 Mass Effect Andromeda, the next entry in the series developed by BioWare launching later this month on PC and consoles, may not get the promised multiplayer beta, but members of the team are doing their best to keep players informed on the game's online mode. Recently, producer Fernando Melo shared some new screenshots which revealed some additional details.

The new Mass Effect Andromeda multiplayer screenshots, which can be found right below, showcase, among other things, character customization features, such as the color wheel for armors and more.

As already mentioned, BioWare confirmed this week that the Mass Effect Andromeda multiplayer beta will no longer take place before release, as the game is close to being released and extensive testing has already been conducted. It's also been confirmed that multiplayer will use peer-to-peer.

While we will have live multiplayer at PAX East, there will no longer be a multiplayer tech test for players at home. Thank you to everyone who signed up. We look forward to seeing you in Andromeda.

Mass Effect Andromeda launches later this month on PC, PlayStation 4 and Xbox One. We will keep you updated on the game as soon as more comes in on it, so stay tuned for all the latest news.