Just like EA did with Battlefield 3 they are determined on making themselves stand out in the world of digital distribution, considering that despite Battlefield 3 didn't launch on steam the game still had successful launch date sales on all platforms even the PC version but now it seems that this was a valuable lesson to EA and they have decided to make Bioware's latest RPG "Mass Effect 3" an Origin Exclusive, the chances of it coming to steam are zero considering how Origin to Mass Effect 3 will be like a source engine game to steam. 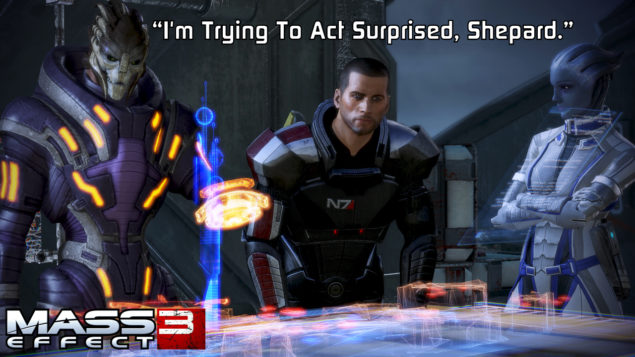 2011 was a gamble for EA when their biggest title "Battlefield 3" which was mainly targeted for the PC audience with superior features was only made available via EA's digital game distribution service known as "Origin" it also ended up with some EA games like Crysis 2 and Bad Company 2 disappearing from the steam store. But despite the gamble a lot of fans bit the bullet and bought Battlefield 3 on Origin and made Battlefield 3 launch a smashing success, while rumors of a steam version were surfacing due to evidence found in PunkBuster update Battlefield 3 is yet to come to steam.

EA has taken a lesson from the past success and have decided to make Mass Effect 3 which is another one of their biggest franchises in the world of multiplatform gaming an Origin exclusive game for the PC only, considering how Mass Effect 1 and 2 have always been sold on steam since their launch it's a shame that the 3 rd game will not be remembered as so.

In their defense EA has stated that the reason for this is how steam restricts consumer and publisher interaction in case of support:

During initial release Mass Effect 3 will be available on Origin and a number of other 3rd party digital retailers, but not on Steam at this time. Steam has adopted a set of restrictive terms of service which limit how developers interact with customers to deliver patches and other downloadable content. We are intent on providing Mass Effect to players with the best possible experience no matter where they purchase or play their game, and are happy to partner with any download service that does not restrict our ability to connect directly with our consumers.

And they also confirmed that the digital AND physical versions will require Origin, but the bright side is there will not be any DRM and of course constant internet connection is required for the multiplayer:

While this is going to be tough to get used to it really shouldn't come in the way of fans who really want to enjoy the best Mass Effect game yet, I admit that trusting an online service aside from steam was risky but Origin is good even though both it and Battlefield have a lot of bugs and issues to work out but in the end the enjoyment from Battlefield 3 makes up for it completely and I hope it does the same for Mass Effect 3 :D.