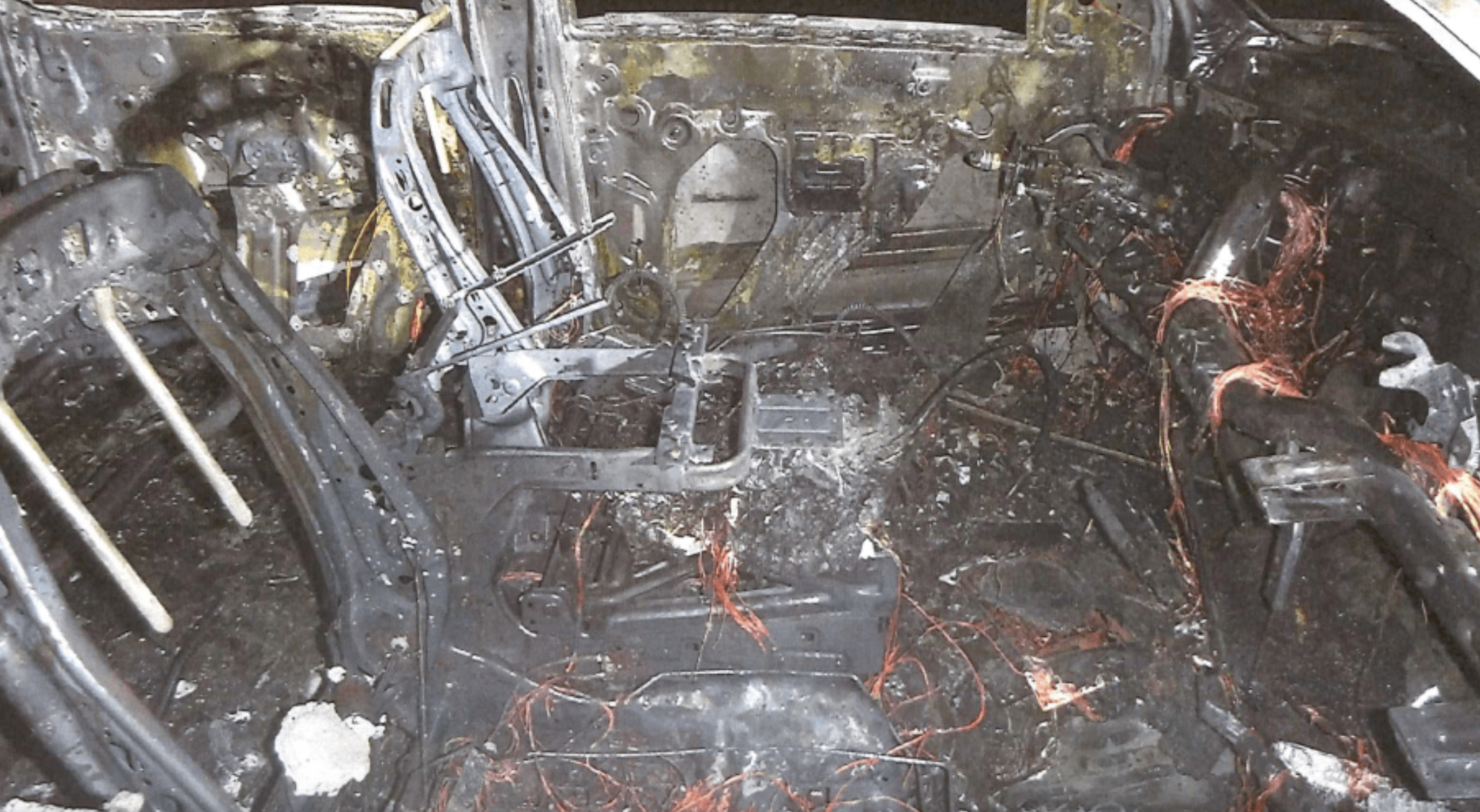 Forensic financial research firm Hindenburg Research is out with a damning report about electric vehicle manufacturer Lordstown Motors. Lordstown offered its shares on the public market via a merger with blank-check special purpose acquisition (SPAC) firm DiamondPeak last year and the company was brought to the front of press attention over an expected order from the United States Postal Service - which it ultimately failed to win.

In its report, Hindenburg alleges that Lordstown's reported pre-orders for its electric truck are fabricated and come from a company that does not operate a truck fleet. This claim is a part of others that state that Lordstown chief Mr. Steve Burns purportedly paid consultants for every pre-order that his company managed to secure.

One of the most striking discoveries by Hindenburg is the alleged fact that Lordstown's order book is "almost entirely fake". The research firm makes six broad claims about the orders, which  it states are:

To prove these points, Hindenburg provides a copy of the company's pre-order agreement which it says to have received from an employee.

This copy reveals that the pre-order in question is a "nnon-binding commitment that does not require a payment of any kind". Another clause notes that both parties will cooperate in releasing a press release for the order. 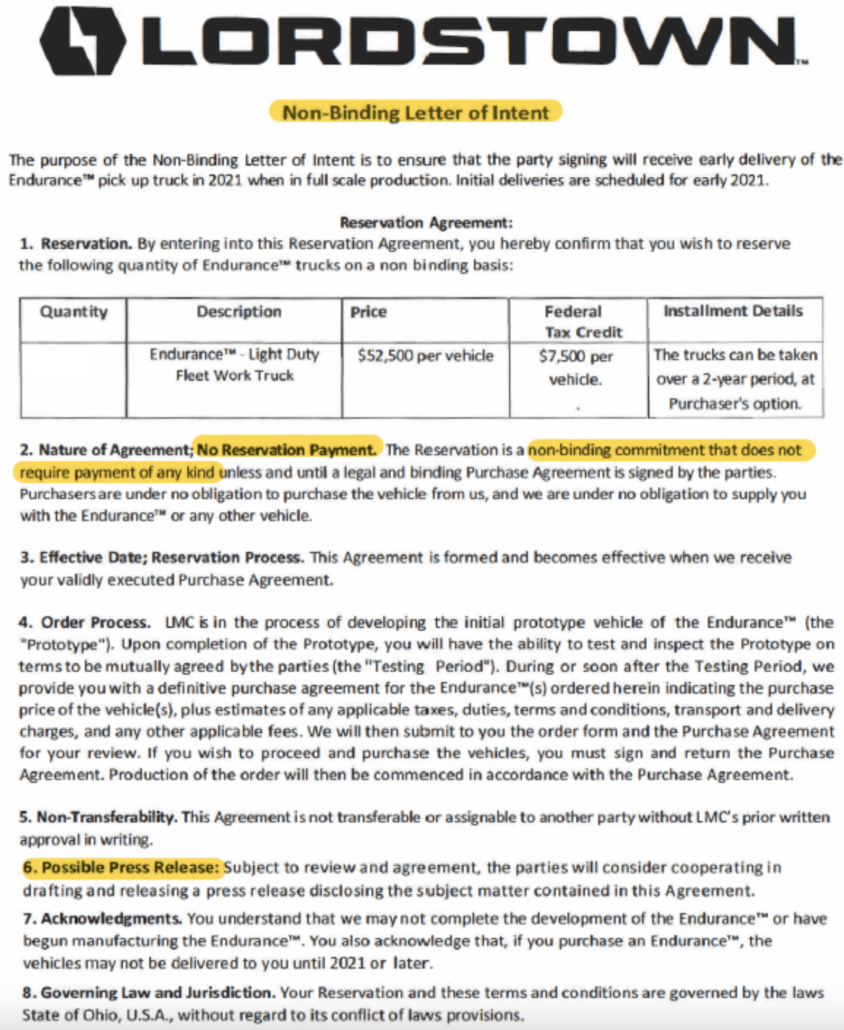 After revealing one Letter of Intent for the Endurance truck, Hindenburg then provides details about three non-corporate entities that placed orders cumulatively worth close to $1 billion for Lordstown vehicles.

The first of these firms is E Squared Energy - a firm that placed an order for 14,000 trucks in a deal valued at $735 million. This firm, according to Hindenburg, is a non-corporate entity - a fact that applies to all three that we'll mention here.

E Squared only has two employees and its registered address is the apartment of its CEO Tim Grosse states the research firm. Hindenburg's interview with Mr. Grosse revealed that:

We spoke with Grosse to learn more about the arrangement. When we asked whether E Squared operates a fleet, Grosse responded with a rather Alice-In-Wonderland answer:

“We don’t operate a fleet but we provide the fleets. It’s kind of a hybrid of a lease but it’s not a lease. That’s the closest thing to describe it as that people are familiar with…”
Pressed further, he accepted that E Squared had only worked in the building sector to date:

“It’s a brand-new program we’re offering. We’ve primarily been in the building sector we’ve worked a lot of large companies and technologies…various technologies.”

We asked what the 14,000-truck number was based on, if anything, and were told it was an “estimate” based on Lordstown’s planned production, not driven by actual customer demand:

The virtual office of Innvervations LLC which placed a $52.5 million order with Lordstown. Image: Hindenburg Research

The other two firms are promoter companies identified as Innervations LLC and Clean Fuels Ohio. When contacted about its order for Lordstown's vehicles, Innvervtions' chief Mr. David Hein explicitly stated that his firm was a third-party that promoted the vehicles that it ordered to other companies. "We’re influencers, our numbers, that’s a very small number but what Innervations does is we promote the product," stated the executive who also works at an architecture firm.

Clean Fuels Ohio also confirmed that its pre-order was without a commitment to purchase, that it was clear about this fact with Lordstown from day one and that the electric vehicle maker accepted this.

Of these, those from Duke Energy and Ryder were done as favors to Lordstown chief to aid his company for capital raising alleged Hindenburg. Additionally, Grid-X, a cloud service company for utilities, flat out denied ever hearing Lordstown's name - with the denial coming from its chief executive officer Jian Zhang, who stated that "I heard of them from your inquiry message the first time."

Lordstown's first road test of the Endurance didn't end well either after the vehicle caught fir ten minutes into the test.

Former employees interviewed by Hindenburg also claim that the company's In-Wheel Drive system is licensed from a small Slovenian company that was on the verge of bankruptcy. Lordstown's plans of manufacturing battery packs in-house also misinformed investors believes the research firm, quoting a former employee who revealed that the company was assembling the packs by hand. Lordstown CEO has claimed that the packs were superior to those offered by Tesla Inc.

Another former employee also claimed that the company is yet to perform any tests required by the NHTSA and for prototype development and that Lordstown has built fewer than ten prototypes so far.