Unconventionally Designed, Octa-Core Linshof i8 to be Available with 80GB of Internal Storage for $380 in Q1 2015

An octa-core smartphone with 80GB of internal storage for $380 - does that sound to be coming from China? We beg to differ and Germany begs to differ too. It may be the first time that the country's name would appear in smartphones market internationally. Designed to stand apart from other conventional smartphones, Linshof i8 carries quite an impressive specs list. 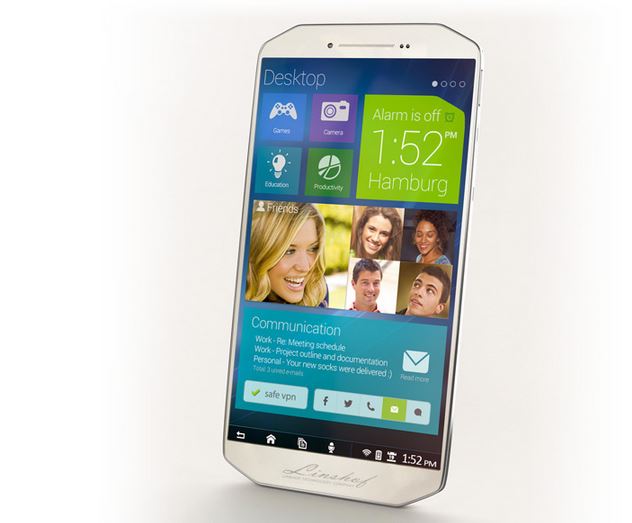 Would Linshof i8 be able to make a mark?

Linshof i8 is a 5-inch 1080p Super AMOLED and IPS display smartphone. Company would create its smartphone in both the display options for different regions. Powered by a 32-bit 2.1 GHz octa-core processing chip, device gets 3 GBs of RAM. One eye-catching spec is obviously the use of 80 GB internal storage. We have heard of 16, 32, 64, and 128 but what's with this 80 figure? Linshof i8 carries 2 separate storage chips carrying 64GB and 16GB, respectively. The latter is specifically used for running apps and is clocked much faster than usual.

Octa-core SoC, 3GB of RAM, 80GB of internal storage, Super AMOLED / IPS display and oh, the camera. Linshof i8 would flaunt 13-megapixel primary shooter with 28mm wide-angle lens, F1.8 aperture and Sony CMOS sensor. The 8-megapixel front camera is itself quite impressive at least in terms of pixels. Linshof i8 would get 3,100 mAh battery to last it longer than a day.

Linshof i8 will be powered by Android 5.0 Lollipop, however, like other major tech companies, Linshof would also install its own custom hardware-accelerated interface atop the Lollipop. PhoneArena reports that this custom firmware skin looks a cross between Windows Phone and TouchWiz "showing familiar tiles, fonts, and color choices. The software keys are redesigned and positioned bottom left, while the status bar appears to their right, which is an unusual arrangement."

You will be able to get Linshof i8 just for $380 unlocked in the first quarter of next year. Would you be considering getting this phone with unconventional looks and quite impressive specs or does it look too awkward?