With the increasing popularity of smartphones, there have been a lot of choices for users to pick from. Plus, with LG just having introduced it's flagship G3 handset, the choice has gotten even more complicated. The G3 has strong competitors along the likes of Samusng's Galaxy S5, Apple iPhone 5S and others. Phonearena.com has done an in depth comparison of one of the most important aspects of a smartphone i.e. it's display. The contenders for the race of having the best display are the Galaxy S5, iPhone 5S, Xperia Z2 and the HTC one. 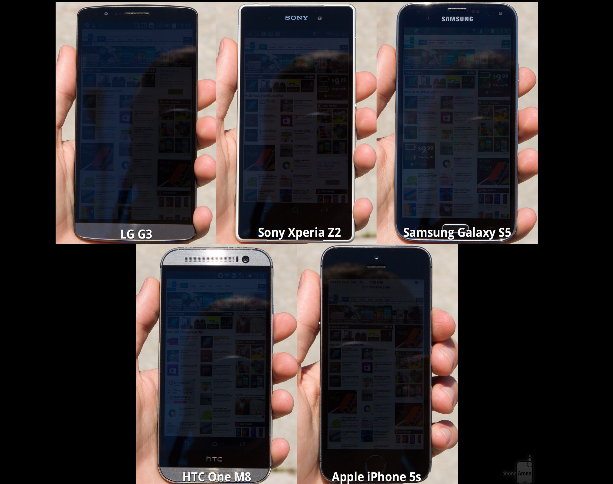 Brightness and outdoor visibility are one of the key features that a display of a phone must have. Comparing the five different phones in terms of content visible when viewed outdoors, LG G3 was the one which ranked the lowest. In addition, the phone also tends to overheat when used outdoors, which automatically reduce screen brightness to 90%, further complicating things. Coming towards the other contenders, HTC's One and Sony's Xperia Z2 produced similar results when viewed outdoors. Speaking in technical terms, the Xperia Z2 can reach a maximum brightness of 450 nits and HTC's One 490 nits. The top contenders for the outdoor visibility spot were Samsung's Galaxy S5 and Apple iPhone 5s. The Samsung Galaxy S5's brightness varies in relation to the content being displayed on the screen. In addition, given that you have the Adapt Display option activated on the phone, the S5 can almost reach the level of Apple's iPhone 5S, which has a monstrous reading of 580 nits.

In addition to outdoor visibility for the phones, indoor brightness i.e. minimum brightness of the phones was also tested. The Galaxy S5 emerges the clear winner in this category, with it being able to go as low as 2 nits. The runner up is the iPhone 5S with a reading of 5 nits. LG's G3 comes in 3rd place with a reading of 9 nits. Sony's Xperia Z2 and HTC's One however end up performing poorly in this category, with both of them only being able to achieve a minimum brightness of 16 nits. This might be a little bit too hard on the eyes when viewed for longer periods of time in the dark. 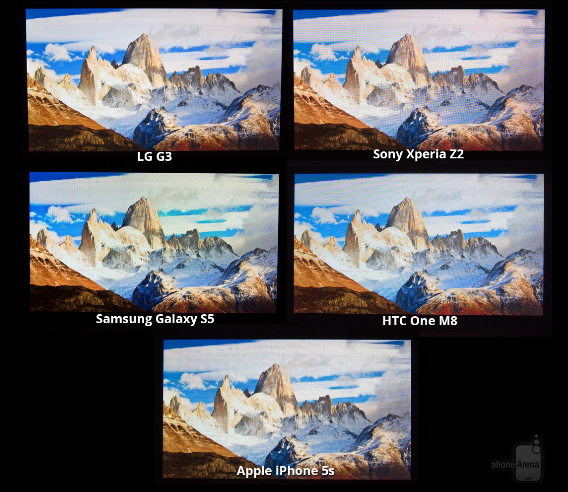 Now coming towards the most detail intensive aspect of a smartphone's display. Color Reproduction determines how accurate a display will be overall. Color reproduction consists of three parts: Color temperature, Gamma and Delta E Matrix.

Color temperature is measured in Kelvin and determines whether the screen will have a colder or a warmer tone to it. It is the balance of overall red and blue in a display. Color temperature is measured in Kelvin and has a reference value of 6500 K, with devices having the closest value to the reference value faring the best. Sony's Xperia Z2 gets the top spot in color temperature rating, with a temperature value of 6900K. Apple's iPhone 5S and HTC's One come in second place with a rating of 7100 K. Next on the rankings is LG's G3, which has a temperature reading of 7300 K. Samsung's Galaxy S5 does the worst in terms of color temperature, with it having a monstrous rating of around 8100 K. Even though this can be changed using the professional or cinema mode on the phone, the Galaxy S5 simply faces ill luck in the color temperature charts. The display of the phone has too much green in it, which leads to an overall lesser aesthetically appeasing display. 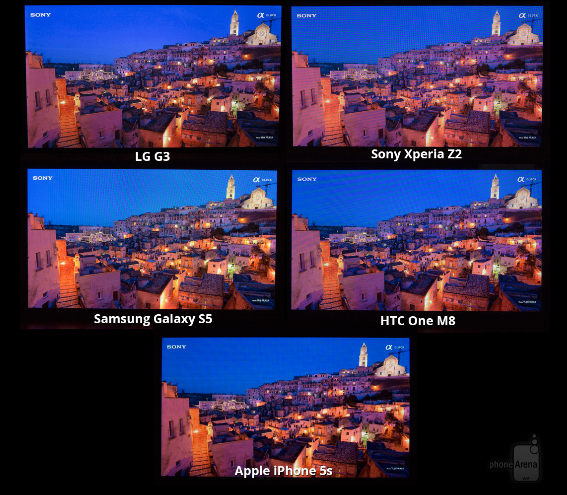 The next part of the color reproduction scale is the gamma rating of the display. Gamma indicates whether the display of the device assigns the correct amount of brightness to the content being displayed. Reference value for gamma readings is 2.2. Apple's iPhone gets the top spot in gamma, with a value of 2.21. Next is the Galaxy S5, with a gamma reading of 2.25. Third on the list is LG's G3, which comes with a gamma value of 2.32. Next is Sony's Xperia Z2, which displays poor gamma performance with an off reading of 2.59. HTC's One under performs in terms of Gamma, with its reading being lesser than the reference value. The HTC One has a gamma reading of 2.11. 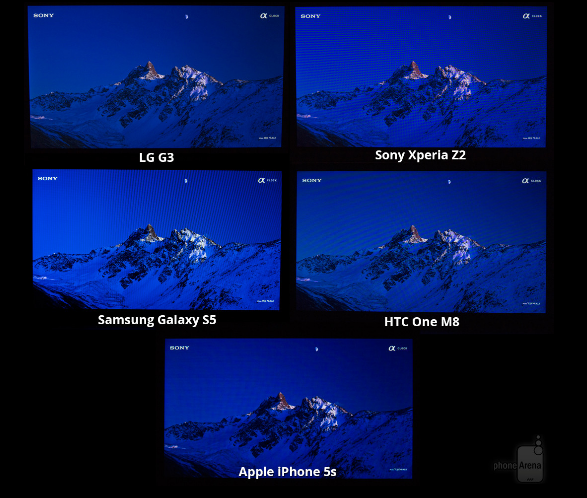 After analyzing the display in terms of gamma values, we now turn towards the Delta E metric. The Delta E metric is used to measure the color inaccuracy of a display. This is done primarily n two ways, by measuring primary and secondary colors and by measuring greyscale. For both greyscale and primary color readings, values below and up to 3 are considered great and values between 3 and 5 are considered satisfactory. Go above 5, and you will be in trouble. Apple's iPhone tops the list in Delta E comparisons as well, with the smartphone having a greyscale of 2.66 and Delta E color rgbcmy of 3.36. Second on the list is LG's G3 with Delta E greyscale of 3.82 and Delta E rgbcmy of 3.78. Sony's Xperia Z2 performs better than HTC's One in the greyscale category with a score of 2.82 (HTC has an average value of 4.82), but lags behind slightly in rbcmy with a value of 4.41 (HTC One: 4.42). The Samsung Galaxy S5 has astounding Delta E metric values. Samsung seems to be aiming high (literally)  in this area, with a Delta E greyscale of 5.08 and Delta E rgbcmy of 7.38. These values are seen in the phone's standard display mode. Such a high score might result in eye catching visuals at first, but translate into an overall poorer display with images and visuals being highly inaccurate. 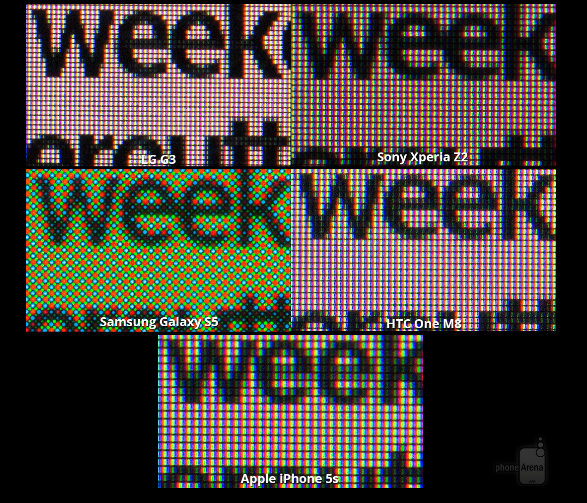 Now coming towards the most widely understood aspect of a smartphone's display, which is it's screen resolution. As smartphones become increasingly advanced, screen resolution is a issue which does not seem to be causing problems any more. Up to the introduction of LG's G3, smartphones came with display capabilities of up ti 1080p which left little to be desired for. By introducing the G3, LG has decided to take things to the next level, by introducing the QHD display. This has a resolution of 1440 x 2560 pixels. So naturally, in the color resolution factor, the G3 tops the list, as is shown in the image above. Others on the list, except the S5 perform similarly, with little pixelation visible in the 5S due to its decreased pixel density. Sansung's Galaxy S5 once again shows the abundant green in it's display.

So coming to the conclusion of the review. In terms of display, Apple's iPhone stays ahead of the competition, with Sony's Xperia Z2 and HTC's One not being far behind. The iPhone gains ground due to top notch color representation and accuracy as well as excellent screen brightness. Where it lacks in terms of resolution, the Z2, HTC One and G3 catch up. However, both the LG G3 and Samsung Galaxy S5 lag behind when it comes to display. The LG G3 performs poorly outdoors while the Galaxy S5 is way off when it comes to color balance. However, apart from outdoor brightness, the G3 performs almost on par with the other phones. Its QHD resolution coupled with the 5.5" screen make for a great display.

Install TWRP Recovery on HTC One M8 – How to

Two Ways to Unlock HTC One M8 Bootloader – How to