Learn Every Detail of For Honor From This Developer Q&A 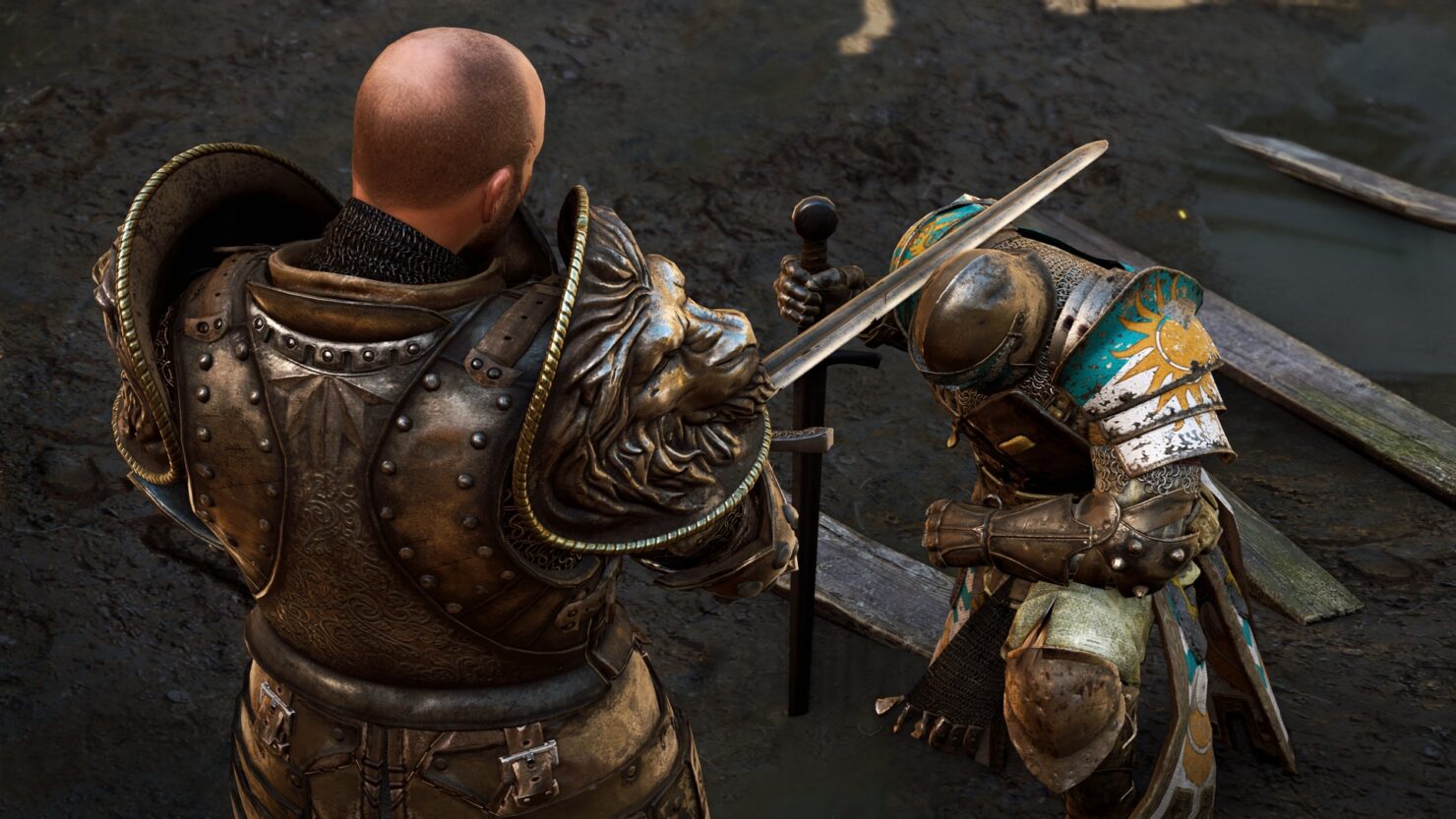 For Honor just got a campaign walkthrough and a release date at Ubisoft's E3 2016 Press Conference. However, the press site revealed more of this promising game from a stunning batch of screenshots to a huge developer Q&A that delves into every aspect of the game. Enjoy!

What is For Honor?

For Honor is a brand new IP developed by Ubisoft Montreal in collaboration with other Ubisoft studios. Our vision with For Honor is to create a raw and visceral action experience that immerses players in a believable battle amongst skilled and deadly elite fighters from the 3 greatest legacies of warriors – Knights, Vikings and Samurai. Thanks to our innovative Art of Battle control system, we’re aiming to deliver an experience that brings the true emotions of what it is to fight to the death on a melee battlefield, whether you play against other players in one of our multiplayer modes or on your own in our story campaign.

What is the scope of the game?

For Honor is a full-fledged game offering a fresh story campaign and an intense multiplayer experience. The game includes different Heroes from 3 unique factions, with each Hero having their own set of skills, weapons, armor and style of combat. Players will also have many customization options so each player’s Hero will look and feel really unique.

Could you tell us more about the factions in For Honor?

In For Honor, each Hero belongs to one of 3 factions: the Knights, the Samurai or the Vikings. The way that all 3 factions are depicted in For Honor is based on facts and popular legends. They are inspired by history even though history never saw a war between Samurai and Vikings. Apart from their differences in appearance and weaponry, each of the 3 factions brings its own representations of what is a warrior: Warrior of passion and fire for the Vikings; Warrior of skill and focus for the Samurai; Warrior of knowledge and gear for the Knights.

What is the Art of Battle?

The Art of Battle is our combat system that delivers the feeling of real dueling without sacrificing accessibility and simplicity. What we’ve done is take the most important parts of actual melee fighting, boil them down to their emotional essence, then work with martial artists and professional stuntmen to mocap every possible move in the game. We then used a brand new method called motion-matching, a big data approach to animation that brings unprecedented realism and fluidity. Secondly, we have mapped our different moves on the device so players are in total control of their characters. They choose where to block, and where to attack. They can bluff, strategize and adapt on the fly. That direct control means that players feel the power of their strike, the strength of their impact and the weight of the weapon in their hands. This conjunction of realistic animations with direct control creates an incredibly immersive and emotional experience. What is motion-matching? This is a brand new method that allows us to include every possible move from our mo-cap session to the engine with great fidelity to the raw material. It is a big data approach to animation that brings unprecedented realism and fluidity. So every move in the game, from a simple step to a complex attack combo, has actually been performed by a real human being with the true constraints of physics such as weight or inertia.

STORY CAMPAIGN - What are you showing at E3 this year?

This year, we’re introducing our story campaign, an essential component of For Honor’s global experience. The story-driven campaign is the perfect introduction to the world of For Honor, a world full of great warriors, epic battles and intense duels. It is playable in solo and in 2-player coop, online or split-screen.

Is the story campaign the only way to play solo in For Honor?

The story campaign is not only playable in solo but also in 2-playerco-op online and split-screen. Each mission will feature several levels of difficulty that will grant more XP and unlock different rewards. All our multiplayer modes will also be playable with and against bots so we have a great amount of content for solo/PVE players.

What will players experience in For Honor’s story campaign?

Our story campaign is a tale of warriors that takes place a few years before the events of the multiplayer. A thousand years after a huge cataclysm that destroyed their world the Knights, the Vikings and the Samurai have finally managed to regain most of their old strength. Each of them now has the power to defy the other factions, transforming a rampant conflict into a total open war. Embodying the greatest warriors in each faction, players will live, from the inside, the events of a crucial moment in that age-old war. Confronted to manipulation and treason, they will need to use all their wits and skills to ensure the survival of their people and foil the plans of the merciless and bloodthirsty warlord Apollyon. Storming castles and fortresses, turning the tide of massive battles and confronting deadly bosses in intense duels, they will become Heroes of legend, symbols and models of their warrior legacies.

Who are the main characters in For Honor’s story campaign?

In our tale of warriors, players will embody Heroes of all 3 factions, including The Warden in the Knights faction, The Raider in the Vikings faction and The Kensei in the Samurai faction. The Warden is a courageous and talented young Knight from the lands of the Iron Legion. Wardens are expected to be noble, brave – living embodiments of virtue. But after years of fighting purposeless battles, The Warden has begun wandering, seeking a cause both equal to their talents and one genuinely worth fighting for. The Raider is a fearless but full of rage warrior who simply had enough of watching Vikings kill Vikings. Raiders, as a rule, can be bloodthirsty -- and this one is certainly no exception. But they’re also famed for the great love they have for their people. By force, by guile, by sheer determination, or by any means necessary this fierce warrior intends to unite the Vikings clans. The Kensei was once a rapidly-rising commander in the Emperor’s service, but an unfortunate habit of speaking the plain truth ended an otherwise promising career. But The Kensei’s obvious talent, faithfulness, and open-hearted good spirit earned many loyal friends, so it should only be a matter of time before The Kensei’s honor will be restored, and their exile ended. As they will go through their adventure, players will also have the opportunity to discover many other members of the For Honor cast: some they’ll play, some they’ll fight alongside and others they’ll need to kill.

Apollyon is a Knight warlord. For her, the only valid law is that there are predators and preys, wolves and sheep and that’s the world she wants to shape. She has nothing but disgust and hatred for self-established leaders who pretend they have the rights to rule other people. She’s an extremely deadly and skilled warrior, totally merciless. But her main strength comes from the massive army she’s leading, the Blackstone Legions, with soldiers and lieutenants totally devoted to her cause. She’s charismatic but her charisma is more about terror.

What is the world of For Honor?

For Honor’s story campaign will drive players into 3 big regions, each one with its own flavor and atmosphere. Ashfeld, land of the Knights, is a region that has been deeply wounded by the cataclysm. It’s an arid land with bright light, clear skies, scattered ruins and massive Knight Castles with high walls. Valkenheim, land of the Vikings, feels much colder, with the constant presence of water and snow and Vikings strongholds that are mostly built out of wood and raw stones. The Myre, land of the Samurai, is more organic, the vegetation is lush and dense with jungle-like forests and swamps. That organic predominance can also be felt in the Samurai fortresses that are deeply embedded into the vegetation.

What type of missions does the story campaign of For Honor feature?

Most of our missions will feature pre-rendered or in-game cinematics that will be the main support of our storytelling. From storming a fortress to protecting a war machine, from epic battles to intense duels, the campaign missions in For Honor are all designed to immerse players into meaningful eventsin which they play a leading role. And of course, as you can expect from a game featuring powerful melee warriors, we will have memorable boss fights!

From a gameplay perspective, what are the connections between the story campaign you’re unveiling this year and the multiplayer experience you pushed forward last year?

For Honor’s story campaign has been designed to be enjoyable on its own, whether you want to play solo or in 2-player online or splitscreen co-op. It’s a tale of warriors, a great warrior adventure that we hope players will find appealing and memorable. For players who are more into PvP, the story campaign can serve as a first in-depth dive into For Honor’s universe and gameplay: throughout the different campaign missions, we expose players to mechanisms and tactics that they’ll be able to leverage in multiplayer.

E3 2016 ON-STAGE DEMO - Could you please tell us more about the live demo you played at the Ubisoft E3 2016 media briefing?

The mission takes place in the Myre, about halfway into the adventure. The Vikings have had a very difficult year, food and other key resources are scarce. But they heard that the Samurai are wealthy and especially that they have plenty of stuff hidden in their main fortress. So they do what Vikings do: they build a strong fleet to raid and plunder the Samurai land, hoping to take them by surprise. In that mission you play as The Raider, one of the Viking Heroes you will embody in the campaign. When your fleet arrives at the shore, the Samurai army is all prepared to welcome you and your fellow Vikings – you expected a quick victory but instead you’ll have to fight your way. While the Viking troops are having a hard time getting the upper hand on the Samurai ones, you save the day by letting the Viking army get inside the fortress and by confronting the Samurai commandant in an epic final duel.

HEROES - Who are the playable characters in For Honor?

In For Honor players take the role of Heroes who are either part of the Knights, the Samurai or the Vikings. These Heroes are not random footsoldiers nor are they generals or commandants, they are true legendary warriorsthey have outstanding melee fighting skills and each of them will make a major difference on the battlefield. They all have their unique set of weaponry and playstyle but whatever the one players pick, they will always have this possibility to turn the tides of the battle.

ALPHAS AND BETAS - When will live periods take place?

It’s very important for us to get feedback from real players on our core experience as soon as possible. That’s why we already organized a Closed Alpha on PC in October 2015 with a limited number of players under NDA. And today we’re pleased to announce that we’ll have more alphas and betas before launch. In fact, the next one will take place soon and players can already register on forhonorgame.com for a chance to be part of our forthcoming alpha and beta.