With this year's lineup of flagship refresh having almost ended, its time that we start receiving word about new devices. With word about Xiaomi's Mi5 having leaked today, and the device expected to come with Qualcomm's Snapdragon 820 on board, rumors related to Apple's iPhone 6S have also surfaced, highlighting several upgrades on the company's next flagship smartphone. 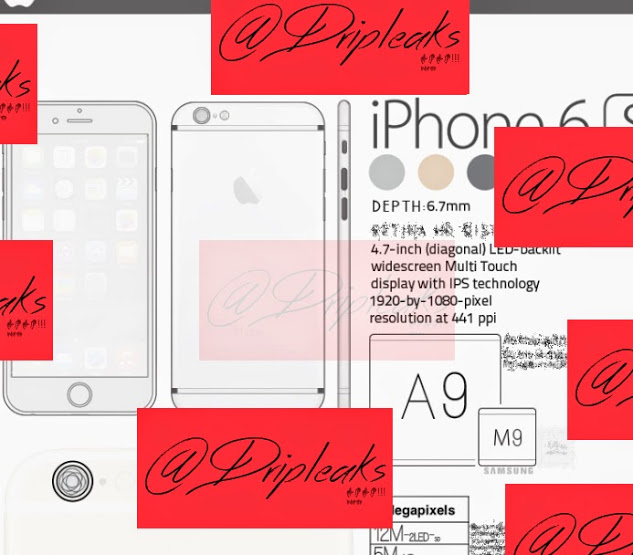 While its almost a sure thing by now that the next iPhone should be expected with Apple's upgraded A9 processor, there has been little information so far about the device's other specifications. Well, some specifications have been posted by a relatively new entity on the leaks scene, Drip Leaks. According to this information, not only with the iPhone 6S be coming with Apple's A9 processor, but it will also see its thickness reduced to 6.7mm. Not only this, but according to this information the iPhone 6S will also see a pixel density increase to 441ppi. The co-processor alongside the A9 will be the M9 and the iPhone will also see a rear camera resolution increase. The rear camera for the device will come with a resolution of 12MP with the front camera to boast a 5MP sensor.

Such drastic changes sound more like Android upgrades, with manufacturers in that corner of the smartphone world rushing to equip their phones with the highest specifications. Given Apple's traditions of sticking with the ppi and camera resolutions and not increasing such specifications unless there's need, its very likely that this bit of information is nothing but hot air. Nevertheless, interesting speculation anyways, particularly the bit about thickness decrease, which really does beg the question as to how far can Apple go. iPhone 6S specification leaks are rare these days so its interesting to see something pop up. Take it with a grain of salt, and let us know what you think in the comments section.