KLEV Announces the CRAS C710 NVMe M.2 SSD, An SSD Lineup Which Features Write Speeds of Up to 2,100 MB/s

KLEV Introduces the CRAS C710 SSD that has been designed to provide optimal PC usage while balancing both power and reliability. These SSDs come in a total of three different capacities; this includes a 256 GB model, a 512 GB model, and the largest capacity being a 1 TB model. These varying capacities allow users to buy a model with just the right amount of storage that they need. All of these models come with a five-year warranty to ensure the user's confidence in the drive itself.

KLEV introduces the CRAS C710 Series of SSDs, and this series balances speed alongside a reduced latency. This SSD utilizes the NVMe PCIe Gen3 x4 interface in the form factor of M.2 2280, and This form factor offers widespread compatibility with both systems and addon cards, that may be installed into computers. 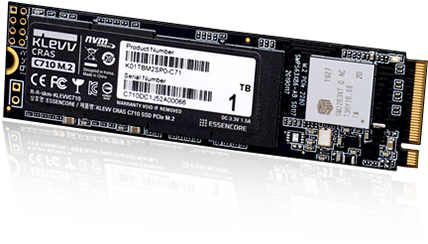 These SSDs are built using the SMI SM2263XT memory controller in addition to using strickly-selected 3D TLC NAND flash chips. These NAND chips are strickly-selected to ensure that they are able to offer the necessary speed and reliability.

These SSDs also feature a wide range of hardware and software protection for data and for the drive itself. These features include Global Wear Leveling, which can extend the life of the device and makes the SSD significantly more stable. Alongside the Global Wear Leveling, these drives feature an SLC Caching Algorithm, and this algorithm provides improved durability and as well as improved performance of the drive itself.

Sadly, KLEV hasn't announced any pricing for any of these devices yet.