While there is no official word by the developer or publisher, rumors strongly suggest that the sandbox adventure video game Just Cause 3, successor to 2010’s most critically acclaimed open-world shooter known as Just Cause 2, is in development at Avalanche Studios for latest platforms, and evidence of the game’s existence is gradually emerging online. The latest discovery comes in the form of four alleged screenshots that have been taken from Xbox One version of the game and suggest that the game might be free-to-play supported by micro-transactions. 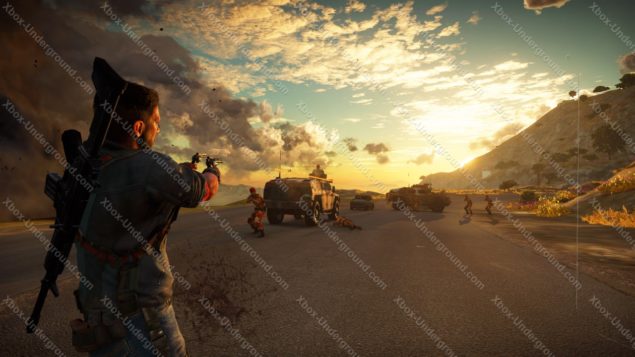 Leaked Just Cause 3 Screenshots from Xbox One Version Show Rico in Action, Island Covered in Snow, and In-Game Black Market with Micro-Transactions

Just Cause 3, the next, highly anticipated installment in Edios Interactive’s critically acclaimed open-word shooter video game series known as Just Cause, still remains unannounced, but in recent times, we come across quite a number of rumors and reports that suggest that the sandbox adventure video game is being developed in secret using the offerings of latest video game consoles. This time finally, there is something more evident that has been found to prove the game’s existence; leaked in-game screenshots that emerged recently on Xbox-Underground forums.

The website claims that the leaked screenshots come from a debug copy of the Xbox One version of Just Cause 3. Everything showcased in the screenshots looks quite in place for a Just Cause game. Two of the four images appear to show Rico, the main character of the series, in third-person view. Another one gives an overview of what looks like an island all covered in snow. The most interesting screenshot is the first one, which suggests that the game might be released as a free-to-play title supported by micro-transactions by revealing a menu where players can allegedly pay for items, such as vehicles and weapons. You can clearly see the “press Y to buy more” gems (unnamed currency) option in the first screenshot below.

Eurogamer reports that a source close to the game verified that the first image is indeed from Just Cause 3, and it shows off the game’s “Black Market” that allows players to add new items to the in-game world. Furthermore, the anonymous source claimed that, at one time, PC version of Just Cause 3 was planned to be released as completely free-to-play title while the console versions were to be released as paid games supported by micro-transactions, but Eurogamer adds that "the plan changed and this may no longer be the case."

When contacted, both the developer, Avalanche Studios, and the publisher, Square Enix, declined to comment on the topic. However, the development of Just Cause 3 is something of an open secret now as Square Enix itself registered a Just Cause 3 domain back in April. The newly leaked screenshots also fall in place as Avalanche boss Christofer Sundberg himself stated previously that micro-transactions are simply part of the new-gen games. He said last year via Twitter:

"Microtransactions, subscriptions, and other biz models will be the next generation of games. It is that simple. We'll never compromise on quality or sell our souls for a quick buck. Things are changing and we need to adapt."

What do you think about Just Cause 3 being released on the latest platforms as a free-to-play title with micro-transaction? Share your thoughts in the comments section below.