iTunes 11.0.1 Released For Windows And Mac

Earlier this month Apple finally released iTunes 11 for Windows and Mac. This anxiously awaited major update of iTunes brings a lot of changes, most of which have been greatly received by the public. Apart from sporting major user interface changes iTunes 11 brings a number of new features as well.

Now Apple has rolled out a minor update of iTunes. This update is dubbed iTunes 11.0.1. Evidently it is just an incremental update featuring a host of bug fixes. You can now download iTunes 11.0.1 for Windows and Mac. 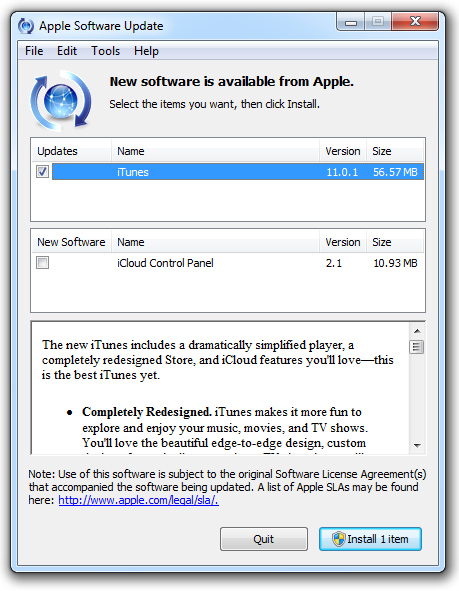 As is the case with all new Apple products, hardware or software, the company calls iTunes 11 the best iTunes yet. Not many would disagree with this statement. As previously mentioned, the entire user interface has been redesigned and it is now simpler than ever before. The iTunes Store has also been redesigned, navigation has been made easier and it is now less tiring to find content on the iTunes Store. iTunes 11 introduces Up Next, a single place in the new iTunes which shows songs in queue. Users can add, remove or skip songs straight from Up Next.

It also touts a new MiniPlayer. It lets users listen to music without taking up too much of screen real estate. Apart from showing what's playing, MiniPlayer now includes album art, adds Up Next, and makes it easy to search for something new to play—all from a smaller and more elegant design.

As far as iTunes 11.0.1 is concerned, it certainly does not come with any new features. It does however come with a couple of imperative bug fixes. iTunes 11.0.1 makes the software more responsive when searching a large library. This incremental update addresses an issue where new purchases in iCloud may not appear in the user's library if iTunes Match is turned on, it also fixes a problem where the AirPlay button may not appear as expected and brings the ability to display duplicate items within the user's library. Apart from all of these fixes, there are the usual stability and performance improvements.

You can download iTunes 11.0.1 for Windows and Mac right now either from Apple's website or by launching Software Update on your computer.