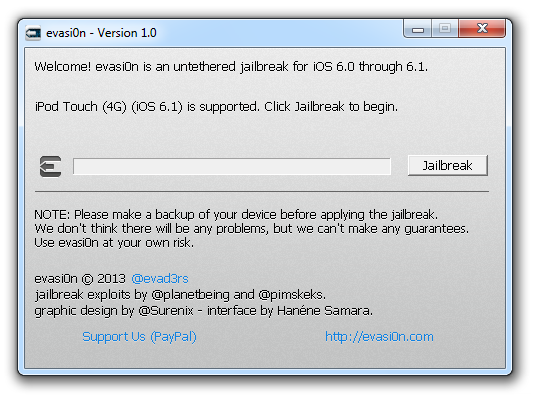 Apparently the iOS 6.1.1 update for iPhone 4S was quickly rushed out the door to fix the issues that users were facing. Apart from conventional network issues such as having trouble connecting to the network or text messages not going through, a major bug was causing Microsoft Exchange servers to slow down. This was affecting enterprise users which form a large chuck of Apple's user base.

Maybe it was this rush that prevented Apple from patching the exploits used in evasi0n just yet. So as of now it is possible to get an iOS 6.1.1 untethered jailbreak on iPhone 4S using evasi0n v1.3. iOS 6.1.1 is already in beta stage and given the fact that it has only been seeded out for iPhone 4S at this point in time, there exists a possibility that these exploits will be patched in the final roll out of iOS 6.1.1.

It is very easy to do an iOS 6.1.1 untethered jailbreak on your iPhone 4S. The process is exactly the same, a few bugs that were being experienced in evasi0n v1.0 have been ironed out, which make the procedure even smooth. The Evad3rs Dev Team has done an amazing job with this jailbreak as this happens to be, by far, the most easiest of all jailbreak tools released to date.

Step 3: Follow our detailed guide posted here for all the steps required for iOS 6.1.1 untethered jailbreak on iPhone 4S.

The entire procedure will take no less than five minutes. Be sure to follow the instructions to the letter. If you still face any difficulties, you can reach out to us by leaving a comment below.